Lawlor feeling at home fighting and living in Vegas 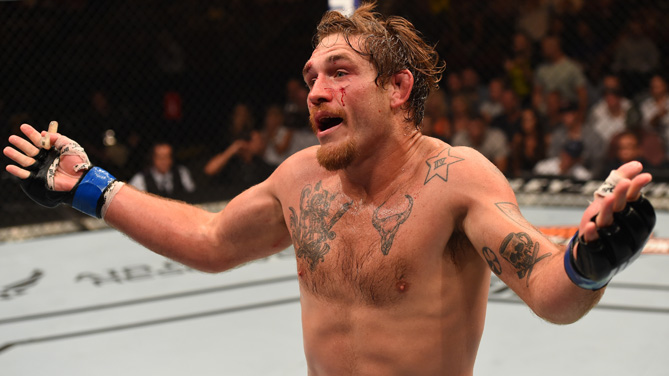 When Rafael Dos Anjos was forced to withdraw from his UFC 196 main event against Conor McGregor, about the only one on the roster who didn’t call “The Notorious” one out was light heavyweight veteran Tom Lawlor.

“My Irish heritage has led me to respect him too much to put a beating on him,” deadpans Lawlor, as quick with a quip as ever, but also settling into his fighting prime with a new maturity.

Maybe it’s the son he and his girlfriend welcomed into the world on October 9, or the two-fight winning streak he’s put together that has him on this Saturday’s Pay-Per-View main card against Corey Anderson and thinking big. Then again, it could just be that Las Vegas living that has the New England native seeing a light at the end of the tunnel after eight years in the pro MMA game.

“I tried to avoid it forever, but now I'm here and I don't foresee myself leaving any time soon,” Lawlor said of life in Vegas. “This is, I would say, the top place to be for fighting, just because of the amount of shows and the fighters that are here, and it's all high level high quality guys. You have many options throughout Las Vegas. There's always boxing and MMA shows, always grappling competitions, a lot of gyms out here, but there's a lot of people as well, so it's not as if it's over saturated.”

And at 32, it feels like home, so why not get a home game this weekend against Anderson? In two outings in “The Fight Capital of the World,” Lawlor is 2-0, with a notable 55-second submission of CB Dollaway at UFC 100 back in 2009. “Filthy” Tom made some good money with that Submission of the Night bonus, but he’s not superstitious (in a good way) about fighting in Vegas.

“I'm not superstitious, but I believe in the power of suggestion,” he chuckles. “It (superstition) doesn't enter my mind at all. I've fought all around the world, and each fight's a different scenario. Although I will never fight in Montreal again because I fought twice there, and that's enough.”

Lawlor went 0-2 in Montreal, but that last defeat to Francis Carmont in 2012 was his last defeat, as he submitted Michael Kuiper and knocked out Gian Villante in his most recent outings. That’s the good news. The bad is that one of those fights was in April of 2013 and the other in July of last year. But with his injury woes a thing of the past, he’s ready to move on by taking a veteran’s approach to training camps.

“Right now, I'm really healthy, so I'm expecting something to go wrong,” Lawlor said during this Feb. 23 interview. “I've been relatively careful, and I'm actually going to start winding down a little bit earlier than usual. This Thursday will be my last real training session, then I'll start tapering off. I have no issues with weight. I put in the time and the work over a longer period of years, so in the back of my mind, I don't need to stress myself and go all out for a month or two months right before the fight because I'm constantly in the gym. And for the last ten years, I've been working hard. So as long as I can get in there and stay healthy, learn a few new tricks along the way, then I'm confident going into the fight.”

As for that fight, Lawlor is confident of victory and of the next step in his career, as he hopes to get a spot on this July’s UFC 200 card.

“There are some names that I may call out when I beat Corey Anderson, but my bigger goal after this fight is to fight on UFC 200,” he said. “I don't know how many other guys would have the opportunity to fight on UFC 100 and 200, but being that I won a big bonus at UFC 100, I feel like it's my destiny to fight on UFC 200 and do the same thing.”

But what about the long term? If Lawlor has his way, it won’t be that long.

“I hope I'm done by the time I'm 35,” he said. “I hope I can get two or three more fights in this year, two or three more the next year, really cement myself not just as a personality in the UFC, but somebody that younger fighters can kind of pattern themselves after and look at me and go ‘you know what, this guy did it right the whole time. He busted his ass in the gym, he wasn't out there taking shortcuts, and eventually, when all these new testing procedures got put into place, he came out ahead in the end.’ That's my goal at this point.”