SAN JOSE, July 26 - Johny Hendricks, Robbie Lawler is coming for you…again. After a gritty five-round battle with Matt Brown at the SAP Center Saturday, the veteran Lawler secured a second UFC welterweight title fight against the reigning titleholder by pounding out a close unanimous decision win.

“I’m very excited,” said Lawler. “It’s time to go back to work and I’ll be waiting for him.”

Scores were 49-46 twice and 48-47 for Lawler, who lost a razor-thin bout to Hendricks for the vacant title in March. But to get a rematch, he had to knock out Jake Ellenberger in May and then survive 25 minutes with the ultra-tough Brown, who brought a seven-fight winning streak into the Octagon in San Jose.

Brown (21-12) shot out to the center of the Octagon to meet Lawler but ate a 1-2 in the process. A couple shots moments later continued to get Brown’s attention, with the Ohio native’s aggressive rushes coming up empty. 90 seconds in, Brown was able to rock Lawler briefly, but the smiling Iowan fired back before the fight hit the deck midway through the frame. After a brief spell on the mat, the fighters rose and locked up against the fence, both jockeying for position. Brown found a bit of daylight to land some elbows, but a 1-2 from Lawler broke his foe’s grip and then Lawler attacked the body, clearly slowing the bloodied Brown down before the horn ended the round.

Having tasted each other’s power in the first round, the fighters were more measured in their attacks in the second frame. Brown remained the aggressor as Lawler looked to counter, and “The Immortal” even scored a quick takedown to mix things up. Once standing, Lawler tried to get the points back, but Brown was having a bit more success at this point, and he remained steady throughout the round.

Brown went after the takedown immediately to start the third round, but Lawler fought it off and began stalking his opponent, punching upstairs and then nailing him with a kick to the body. Another kick to the body with two minutes left hurt Brown, but the Columbus product claimed it was low, bringing a momentary halt to the action. When the fight resumed, Brown stayed busy, but he also stole a glance at the clock, bringing his cardio at this point into question.

With two rounds to go, both fighters came out for the fourth with a sense of urgency, and the bout quickly strayed to the mat after Lawler blocked a Brown head kick. After a bit of a stalemate, Brown worked his way upright, but Lawler put him right back down. Brown again fought to his feet, and this time he broke free, going back on the offensive while now showing blood around his ear.

As the fifth round began, Brown and Lawler slugged it out, each getting hard shots in at close range. A Lawler body kick slowed Brown down, but the Ohioan wasn’t stopped, so he kept coming, taking his turn to assume the lead. But when the barrage from Brown topped, it gave Lawler a chance to come back. Almost like clockwork though, when Brown had his opportunity to throw, he came at “Ruthless” with both barrels, thrilling the crowd. With less than two minutes left, Brown stunned Lawler, who merely smiled and punched back at his bloodied foe. And in the final minute, it was Lawler who turned it up a notch, capping off a memorable effort and locking up another shot at Hendricks and the welterweight crown. 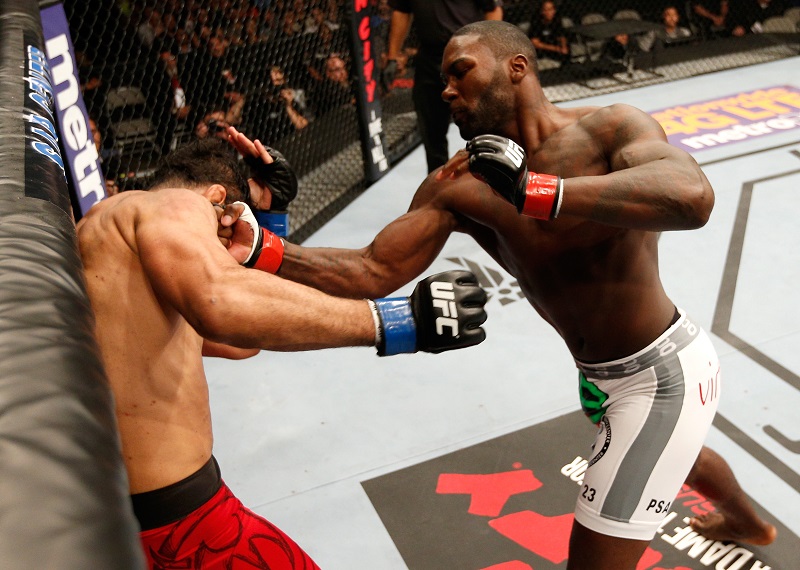 In his second fight back in the UFC after a two-year absence, light heavyweight contender Anthony Johnson continued to impress, making a clear case for his inclusion in the title picture with a blistering first-round knockout of Rogerio Nogueira.

The victory was the eighth straight for the Georgia native, who said "The whole time training I was like I got to hurt this guy real bad or put him away because he's a Nogueira and they don't quit," noting the resilience of the perennial Brazilian contender, who was coming off a 17-month layoff, but also wins over Tito Ortiz and Rashad Evans.

Johnson (18-4) was ready to “Rumble” from the opening bell, and after getting close to Nogueira, he unleashed his thunder and didn’t let him off the hook. An uppercut started things off for Johnson, who had Nogueira (21-6) pinned against the fence, and a steady barrage of flush power shots followed, with referee Herb Dean intervening at 44 seconds of the first round. 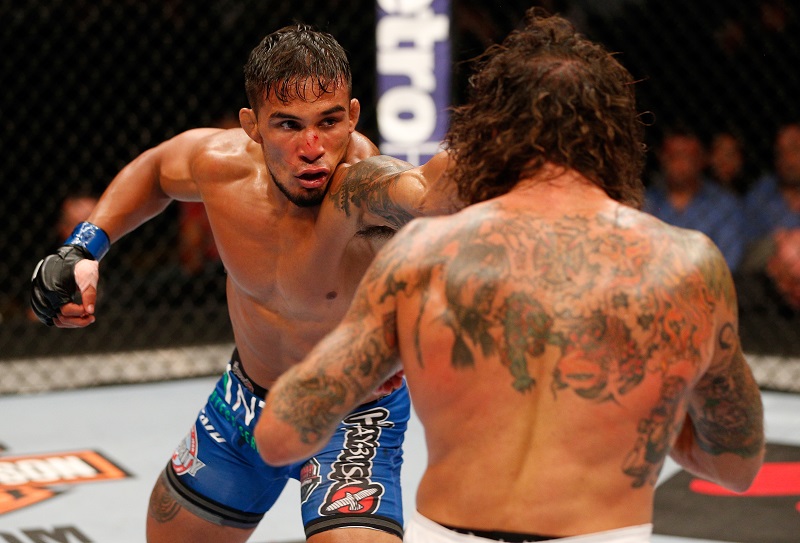 Rising featherweight star Dennis Bermudez’ seventh consecutive win was his most important and most spectacular, as he dominated longtime contender Clay Guida before finishing him via submission in the second round.

“I’d like a title shot, but I’ll take anybody in the top five,” said the victor.

New York’s Bermudez (15-3) put on a clinic in the first round, dominating every aspect of the fight against the veteran contender and bloodying him under the right eye in the process. That didn’t mean the ultra-competitive Guida wasn’t in the fight; it was just that everything he did, Bermudez was one step ahead.

Guida (31-12) did have some more success in round two, but Bermudez didn’t stray from his game plan, and once the bout hit the mat, “The Menace” went to work, scrambling and taking Guida’s back. Moments later, a rear naked choke ended matters with a tap out at 2:57 of the second.

Late-notice replacement Bobby “King” Green rose to the occasion in the most important bout of his career, winning a close split decision over San Jose favorite Josh Thomson in a meeting of lightweight contenders.

Scores were 29-28 twice, and 28-29 for Green, who dedicated the bout to his late brother, Mitchell Wayne Davis Jr., who was slain in June. 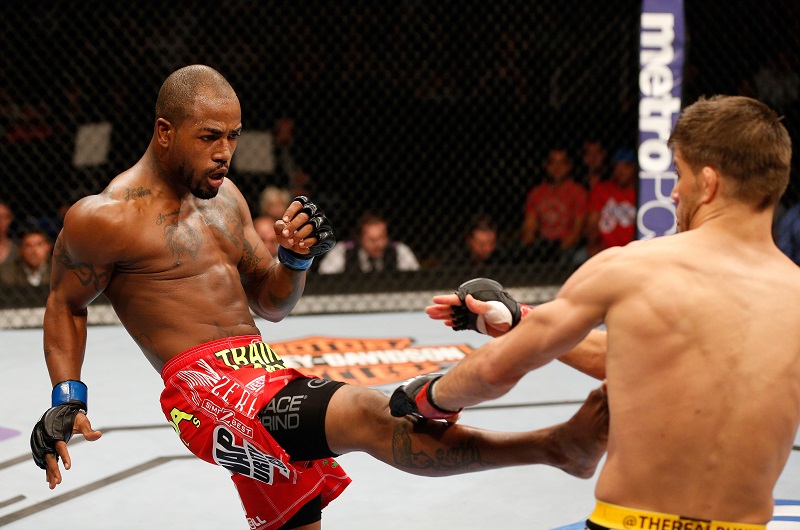 The two high-level lightweights engaged in a fast-paced game of chess in the first, both getting their share of shots in but not enough to take control. After an inadvertent eye poke by Green brought a brief halt to the action, “King” Green scored with a hard body kick that appeared to slow Thomson down briefly. Thomson proceeded to lock up with Green, but he wasn’t able to get him down, with the fight remaining on the feet for the rest of the round.

Thomson upped his work and accuracy rate in round two, drawing comments – but not counters – from Green every time he landed with a solid punch or kick. Green continued to target the body with success, but Thomson remained a step ahead at this point of the fight, even picking up a takedown in the final minute.

Green and Thomson took turns fighting off takedown attempts early in round three, scrambling and throwing all the way. After one solid flurry from Thomson in the final two minutes, Green did get a brief takedown, Thomson emerging with blood on his face as he rose. Not surprisingly, the two continued to battle on even terms to the bell, leaving it to the judges to make the tough call.

With the win, Green, who replaced the injured Michael Johnson, improves to 23-5, winning his eighth straight; Thomson falls to 20-7 with 1 NC.