Lawler: Ruthless To the Bone 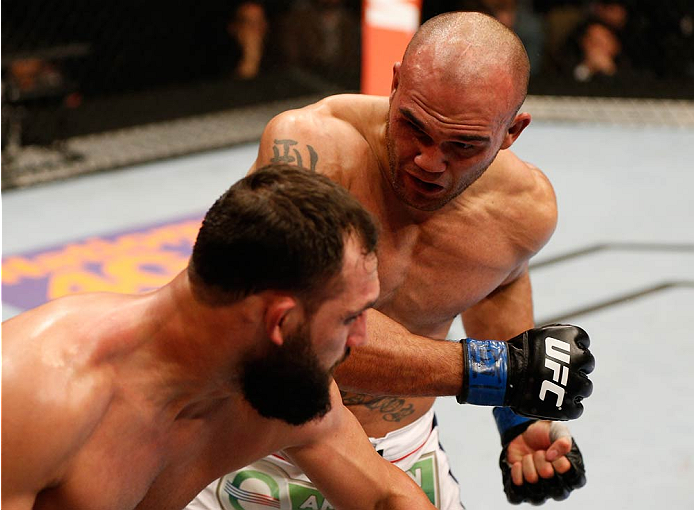 While George Thorogood fancies himself “Bad To The Bone,” for “Ruthless” Robbie Lawler, on the day he was born the head nurse likely spoke up too, and said ‘Leave this one alone,’ she could tell right away, he was “Ruthless To The Bone.”

Lawler, currently ranked number one in the welterweight division following a razor-thin loss to now-champ Johny Hendricks, will put himself to the test once again this weekend at UFC 173, against another hard-hitting fighter from the Midwest, Jake Ellenberger.

Taking another fight just two months after putting in 25 minutes against the champ is not a common event in one of the world’s toughest sports, but for Lawler, it’s just another day at the office.

“I was ready to fight, it’s as simple as that,” he says. “I told (UFC matchmaker) Joe Silva I wanted to get back in as soon as possible. I didn’t take any damage against Hendricks, so why not?”

Didn’t take any damage against Hendricks?

That’s a scary proposition for “The Juggernaut,” as Hendricks, like Ellenberger, is considered one of the hardest-hitting welterweights in the division, with KOs against some of the toughest contenders in the sport.

“I did the most damage in that fight, but I lost. He did a good job in winning enough rounds I guess. It’s not PRIDE. They don’t score damage in the UFC. If they did, I would be the champ today. Now I just have to work my way back, but I’m not thinking about Hendricks anymore. I’m thinking about Jake,” he said.

Much has been made of Lawler’s comeback since knocking Josh Koscheck out in the first round of his UFC return, but what many forget, or simply ignore, is that prior to his latest success inside the Octagon, he was mostly fighting at catchweights and in a higher weight division in several different promotions.

Not only was he inconsistent in the win column, but on the scales as well.

“I’m leaner now than I’ve ever been before weigh-ins,” he said. “Fighting at 170 is good for me. It keeps me eating clean and in the gym, so I am living like a welterweight instead of a middleweight.”

The change has served him well. And while the surging Matt “The Immortal” Brown may very well lay claim to the number one contender spot with a title elimination in his next bout, there’s no doubt that a win over Ellenberger would put Lawler back in the mix sooner rather than later.

“I want the belt,” says Lawler. “But at the same time it’s not something I think about all the time. I just focus on myself and getting better.”

For MMA observers, fighting consistently at 170 isn’t the only recent change in Lawler’s career. The 2014 version of “Ruthless” is someone more comfortable with the media and the fans.

“I remember watching Matt Hughes become champion and it became a job for him,” he said. “I didn’t want that to happen to me but then Matt also embraced it and was professional about media obligations and appearances and things. And that’s just part of our job these days. And I’m having fun doing it. Plus, the media guys have gotten a lot better than when we were first coming up in the sport. Back then there were only a few of you guys who knew anything about the sport. Now the questions we get are a lot better than the ones we used to get, so it’s easier to talk to the media now.”

Indeed, the MMA media have, for the most part, come a long way in the 13 years since Lawler first donned a pair of four-ounce gloves in April 2001. But so has Lawler.

While he has always possessed pure punching power, Lawler’s game is not as one-dimensional as it once was, as evidenced by his ability to stuff Hendricks’ takedown attempts. Gone are the days when a Jake Shields could easily catch him in a submission on the ground.

“I’ve been getting a lot better,” said the American Top Team product. “I’ve taken my game up a couple of notches, but I’m constantly learning new things in this sport.”

Perhaps the greatest change in Lawler’s curriculum has been an attitude adjustment. At 170, Lawler looks like he’s going to the playground, rather than going to the job.

“I’m having fun, yeah,” says Lawler. “I’m looking forward to putting on a great show for the fans, especially the veterans on Memorial Day weekend.”