Lawler Embraces His Ruthless Reputation vs. Woodley at UFC 201 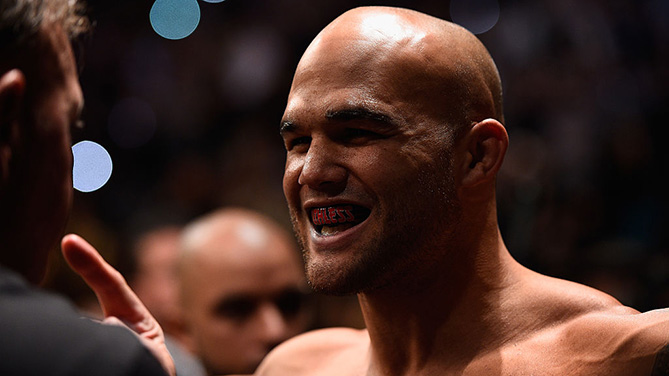 Few UFC athletes live up to their nickname like “Ruthless” Robbie Lawler.

The welterweight champion, who returns to the Octagon in the main event of Saturday’s UFC 201 card against Tyron Woodley, has been relentless and merciless in his last five fights dating back to May 2014. It’s a string that includes capturing the belt, putting on three Fight of the Night performances and leaving behind a slew of bloodied rivals who endured wars but left with no reward, including former champion Johny Hendricks, Rory MacDonald and, most recently, Carlos Condit.

Lawler’s willingness to get into a brawl is well established in the numbers. Twenty of his 27 career wins have come via knockout, he’s connected with 815 significant strikes (second most by any active welterweight) while producing a 16-1 career knockdown ratio, according to Fightmetric. So while other champions may focus on winning by points, Lawler’s aggressive fighting style is one that endears him to the hardcore followers of the sport.

“It’s just awesome,” Lawler, 34, said of his fan support. “They appreciate what I’m doing out there in how I’m trying to win fights and just giving it my all. And it’s not just the fans that appreciate it.

“I’m just a mean fighter who’s looking to go out there and finish people and do what I do.”

That hasn’t always been the case for the San Diego, Calif., native. Sure, the intentions were there, as he’s always been willing to show off his striking skills in battle, but success wasn’t as abundant as it is during this current renaissance period. A professional since 2001, Lawler first joined the UFC in 2002 with three consecutive victories, but mixed results in his next four bouts – including three losses – led to an eventual exit from the UFC in 2004.

After stops in various other fighting organizations, Lawler joined American Top Team – ironically, the same gym as Woodley, his opponent this Saturday – and returned to the UFC in 2013.

The combination of time spent away from the UFC along with the ATT alliance seems to have been just the spark Lawler needed, bringing about not only consistency in results – eight wins in nine fights in his second UFC stint – but also the right combination that makes him a must-see.

“When I came back to the UFC in this last run, I think every fight I’ve added new pieces to my game and new techniques that have worked immediately, so it’s just one thing after another and just trying to be the best fighter you can be and be better than the guy you were yesterday. So that’s what I constantly try to do,” Lawler said.

So what does that mean for his third title defense this weekend at UFC 201? Lawler is quick to praise Woodley as “a really good athlete” who is “fast, strong, explosive and well-rounded,” but that doesn’t mean he’ll change how he fights. It’s what makes him “Ruthless.”

“If it goes five I’m ready to go five hard and finish strong as usual,” Lawler said. “I’m always looking to finish and get it done early if possible.

“I want to knock people out.”