Lavar Johnson - What You See is What You Get 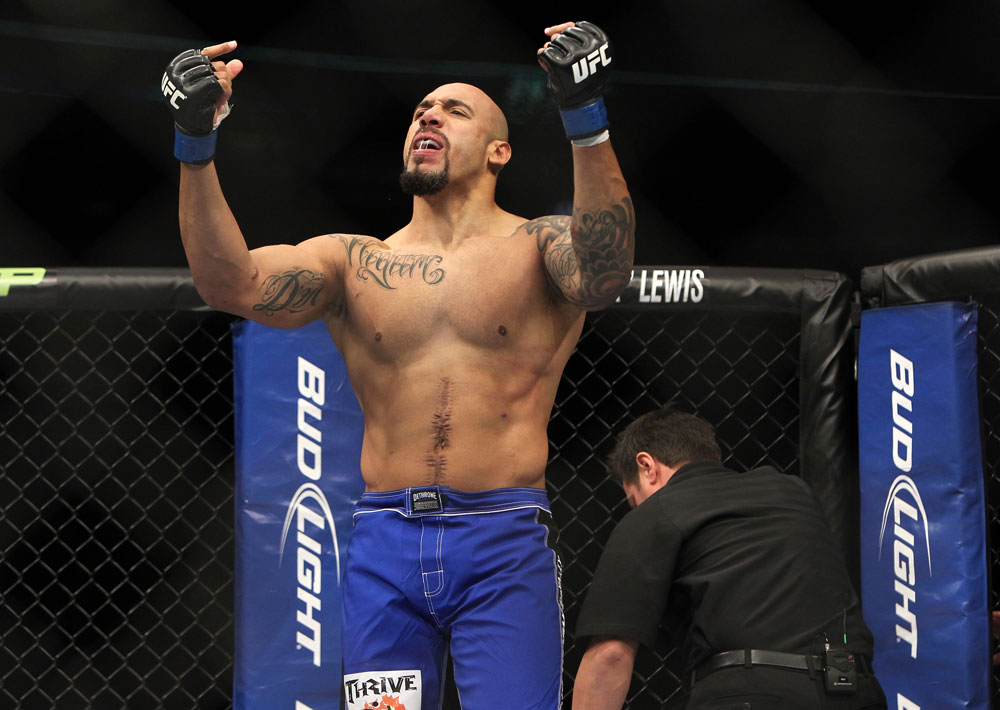 It’s impossible not to like Lavar Johnson. Easygoing in a way no 6-foot-4, 240-pounder is expected to be, the big man from Madera, California is almost unrecognizable from some of the adjectives that describe his fighting style: knockout artist, crushing puncher, relentless.

That’s just fine with him. Even when he’s in the Octagon, or previously on the football field, he makes it clear that it’s never a personal thing. He just likes to win.

“I’m competitive and I’ve got a little mean streak to me,” he chuckles. “I’ve been in fights before, and I like to compete. I played football and I was real aggressive on the football field as well, so it’s nothing to me. I don’t have to be mad. I just like to play hard.”

And with Johnson packing two sticks of dynamite in his fists, when he decides to play hard, it’s usually bad news for anyone sharing the field of battle with him.

Case in point, his UFC debut in January against Joey Beltran. There was no bad blood, no trash talking, just two California heavyweights putting the gloves on and trying to get a win. And despite Johnson’s reputation (he had finished each of his 15 previous wins), many assumed that he wasn’t going to do the same thing to “The Mexicutioner.” Sure, he might win, but he wasn’t going to stop a fighter who earned descriptors like “steel chin” and “iron jaw” the hard way.

Johnson, even with 20 pro fights under his belt, was jittery before getting called to the Octagon.

“I was nervous before I went out there, but after that first punch, everything’s out the window,” he said. “I even threw up before the fight in the locker room and that usually doesn’t happen. So I was a little nervous, but when it’s time to go it’s time to go, and that’s it.”

Four minutes and 24 seconds after the opening bell, that was it for Beltran as well, as a series of uppercuts ended his night and gave Johnson his first UFC victory, and a Knockout of the Night bonus. Add in his pre-fight visit to the trash can, and it was a night of firsts for the 34-year old. Maybe it’s an omen for good things in the future.

The finish of Beltran was a revelation for fight fans, most of whom had seen Johnson do his thing on the local California scene and in Strikeforce, but who never expected him to deliver the goods with such style in his first time on the big stage. But Johnson has been knocking people out for a long time, ever since his days on the Toughman circuit.

“We had 16 ounce gloves and headgear, and I was knocking people out,” he recalled. “I was one of the few people who were actually putting people to sleep. And it went from there.”

Turning pro in 2004 with a loss to future WEC champion Doug Marshall, Johnson righted his ship four months later with a TKO of Levi Thornbrue and began building a reputation as a ‘must see’ heavyweight. You were not going to get wrestling clinics or jiu-jitsu matches from Johnson; win or lose, someone wasn’t going to hear the final bell.

“When you fight, that’s what I think of, people punching each other in the face,” he said. “Any heavyweight can knock someone out with one punch, so that’s what I go in there thinking. Anything can happen, so I try to get off first and make it happen and be the first to land that big shot.”

So when the dust settled from his win over Beltran and a UFC on FOX main card bout with like-minded heavyweight prospect Pat Barry was announced for May 5th, the immediate expectation was bombs away. And Johnson feels no pressure when it comes to keeping his end of the bargain.

“I’m under no pressure,” he said. “I’m the underdog, but this is what we do. We fight. And the only way I know how to win is to go in there and beat ‘em up. I don’t feel any pressure. I feel like I have nothing to lose. The greatest thing has already happened and I’m thankful that I made it to the UFC, and I couldn’t be happier. Everything else is just a bonus. I’m just blessed and honored to be able to compete against these guys.”

Life has undoubtedly changed for Johnson, who almost didn’t make it to this point after a random 2009 shooting that took him out of the sport for 10 months. So he’s grateful for everything that’s happened and he’s just letting his new celebrity soak in.

“I’ve got a pretty big fanbase here, and a lot of people support me,” he said. “I’ll be driving down the street or walking to the gym or store and everybody’s like ‘knock Pat Barry out,’ and this or that. It’s cool, I enjoy it, and that’s why I do it. I do it for the people in Madera, and all my fans and my family. They enjoy it, we’re all big MMA fans, and me being in there competing gives us all something to look forward to.”

“I never thought that I’d be boxing or doing UFC,” Johnson continues. “I always thought those guys were crazy (Laughs), and boxing, I’ve been a big fan, and I would mess around with boxing with my friends in the garage and stuff like that, but I never thought I’d make a profession out of it.”

It’s almost to the point where you hope for a draw on Saturday night in East Rutherford, New Jersey, considering that Johnson and Barry are two of the most likeable fighters in the organization. And even knowing the hostilities that will break out on fight night, both are equally respectful of each other.

“Pat Barry is a funny dude,” said Johnson. “He’s real cool, I’m a big fan of his, and he’s a great athlete. I’ve watched almost all of his fights in the UFC, and he’s a very dangerous opponent. He kicks hard, he hits hard, and he moves well, so I’ve got my hands full.”

Johnson doesn’t think “HD” will stand with him for long though.

“We all think that he (Barry) is gonna try and take me down,” he said. “As soon as I hit him, he’s gonna feel the power and he’s gonna try to shoot. I don’t see it happening, but if he takes me down, I’m gonna get right back up and he’s gonna tire himself out. He’s not gonna submit me, and I’ve been working on that a lot right now.”

So no flying armbars or power double leg takedowns?