"I think it’s gonna be a good and entertaining fight. He likes to stand up and trade and I do too, so I think our styles match up fine." - Lavar Johnson 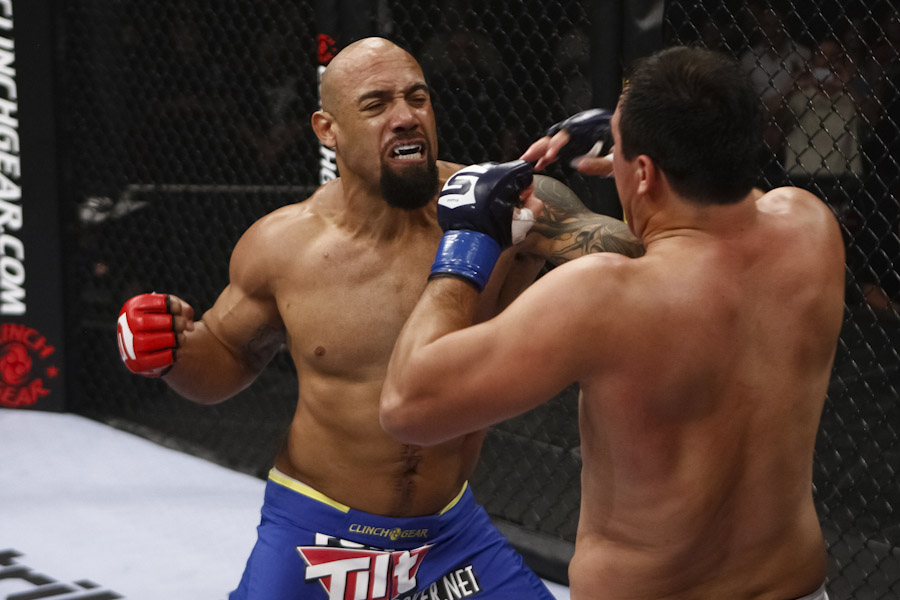 Lavar Johnson knows that the man he’s facing in his UFC debut this Saturday night, Joey Beltran, is one of the toughest men in the entire sport, let alone the division. But the former Strikeforce heavyweight is also aware that fighting 15 minutes or less with “The Mexicutioner” can’t be tougher than surviving being shot three times.

So when the training gets rough or the leather starts flying in the middle of a fight, the 34-year old always has a reference point of how much worse things could be. Back in July of 2009, Johnson was at a family reunion when a random drive-by shooting took the life of his cousin, and injured him and three other family members.

13-3 as a pro at the time, and less than two months removed from a Strikeforce debut that saw him knock out Carl Seumanutafa in just 18 seconds, Johnson was now in the fight of his life. Hit in his stomach, forearm, and hip, Johnson was forced to have his appendix removed and he received damage to his colon and intestines. Eventually though, after losing 60 pounds, he recovered and left the hospital. It was a life-altering experience for the Madera, California native.

“When you’re that close to dying, you realize how precious life is,” said Johnson. “I’ve got kids and my girl, and I saw everybody else going through it…my life means a lot to me, but it means a lot to others as well, so it puts everything in perspective.”

And just like a fighter, Johnson had every intention of putting the gloves on again, and less than a year later, on March 26, 2010, he picked up where he left off, stopping Lolohea Mahe in the second round.

“It (the shooting) didn’t really affect me too much,” he said. “My breathing was just a little off, but everything healed up fine, so I’m good to go. I haven’t had any problems, other than being old (Laughs) and the wear and tear on my knees; that’s about it. Other than that, I’m good.”

Following the win over Mahe, Johnson knocked out Virgil Zwicker in the first round of an October 2010 bout, but 2011 wasn’t as kind to him, as he was submitted in consecutive fights by Shane del Rosario and Shawn Jordan, putting his record at 15-5. But as he prepares for Beltran, the one thing he probably won’t have to worry about is getting submitted, as this one has Pier Six brawl written all over it.

“I think it’s gonna be a good and entertaining fight,” said Johnson. “He likes to stand up and trade and I do too, so I think our styles match up fine.”

The question is, has Johnson ever faced anyone with a chin like Beltran’s, and has Beltran ever faced a puncher like Johnson? The 34-year old banger thinks he has the answer to those questions.

“I don’t think he’s been hit by anybody like me yet, so we’ll see. I’ve got a little pop in my punches, so we’ll see how he handles it.”

If Johnson sounds confident in his ability to become the first man to knock out Beltran, he’s got reason to be. None of his wins have gone the distance, with all but one ending via his fists. But more than that, Johnson has gained confidence by working with two of the best big men in the game – former UFC heavyweight champion Cain Velasquez and Strikeforce Grand Prix finalist Daniel Cormier. Johnson has gotten plenty of sparring time with Velasquez at the AKA Gym in San Jose, and that experience has been invaluable.

“You get to see where you’re at,” said Johnson of working with Velasquez. “If you ever have the chance to spar with the heavyweight champion of the world, you’re gonna test yourself and see where you’re at. He was number one in the world, and you’re always pushing forward and trying to better yourself, so it always gave me a push and I’m always learning something new. Him and Cormier always take the time out to show me a little something here and there. That’s awesome, and they’re good guys too.”

Watching Velasquez in the eye of the media storm has helped the soft-spoken former linebacker carve his own path as well.

“He (Velasquez) is humble, he’s himself, he doesn’t get caught up in the media and the hype, and he just does his job,” said Johnson. “He’s a hard worker, he clocks in, does his job, does it well, and goes home.”

Expect the same from Lavar Johnson.

“I know he (Beltran) is gonna go hard and he’s not gonna give up and quit, and neither am I,” said Johnson. “I just hope the fans get a Rocky-type fight, but of course with me raising my hand at the end.”