Lauzon's fights extend outside the Octagon

As one of the UFC’s greatest action heroes, Joe Lauzon has always fought with what appears to be a reckless fearlessness. It’s almost as if he doesn’t have a care in the world when he’s in the Octagon, and that may be because when he’s fighting, he doesn’t have to deal with anything else but that.

“After everything we’ve been through with Joey and everything else, I think fighting’s kind of easy in comparison,” Lauzon said, referring to the cancer scare he and his wife Katie went through with their son. “It sucks sometimes, and training is kind of a grind, but it’s all small potatoes. It’s so much easier doing that kind of stuff, stuff that I have control over.”

In the lead-up to Lauzon’s highly anticipated rematch with Jim Miller in Vancouver this Saturday, the Massachusetts native has continued to enjoy his time with Joey, two and a half years old and cancer-free. That doesn’t mean the lightweight veteran has forgotten what it took to get to this point, so he’s been preparing Team Joey for their annual Jimmy Fund Walk on September 25.

“If it wasn’t for the Jimmy Fund, I don’t think Joey would be here, I really don’t,” Lauzon said. “They helped us so much, and it’s not like, ‘Oh, we’re good, screw everyone else.’ We can’t forget about it, and we should keep it going and there are other kids that this is gonna help. The Jimmy Fund was awesome to us, so we try to pay it forward and keep it going. It’s one of those things you just feel really good doing. And everyone says that every year.”

Add in the fact that Lauzon is coming off one of the most spectacular wins of his career, a first round stoppage of Diego Sanchez at UFC 200 last month, and for a while things couldn’t be better.
RELATED CONTENT: Free Fight - Lauzon vs Miller 1 | Matchup with Miller part 2 | Lauzon fighter bio

Then came August 6, and a tragic loss to Lauzon and his Lauzon MMA family, as up and comer Devin Carrier was killed in a car accident. He was only 21.

“There’s guys that train at my gym, but then there’s my guys that I train with every single day, and Devin was one of those guys,” Lauzon said. “He was like a little brother to me and honestly, he was one of the only people I ever encountered in training that I felt did everything right. He trained really, really hard, he had a great mind for fighting, and he never shied away from doing the hard stuff. He always wanted to learn the stuff that he was not good at. He was a hard working kid, super tough, and would always do the stuff outside the gym – he would diet right, he would lift. He did everything perfect, and it sucks. We trained with him Saturday morning, and then him and his brother were driving home from the gym when they got into the car accident. It’s incredibly sad. He was one of the best people I know, and it was really tough.

“Every day going to the gym,” he continues, “It’s like, ‘F**k, Devon’s not here today.’ Or I’ll see a car that looks like his car, and I’ll think it’s him for a second. It’s just really, really crappy. It’s tough on so many different levels.”

Lauzon’s usual high energy dips, but when those hard times hit, he always has his escape in the gym, and in the Octagon. And knowing that Miller is determined to knock him out or submit him doesn’t rattle him in the slightest. 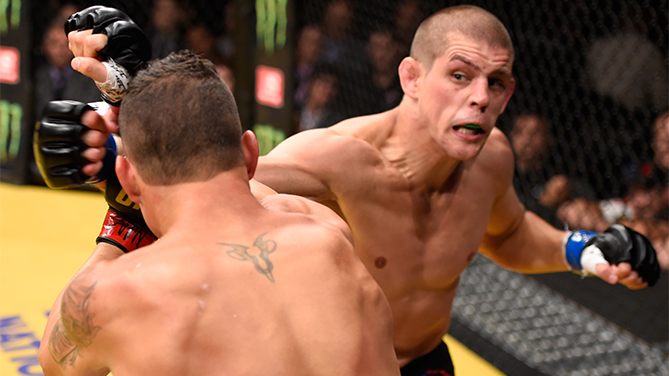 “The worst thing that can happen is I fight Jim Miller and I lose a fight,” he said. “Obviously I want to win, but it’s not that big of a deal in the grand scheme of things. There are so many bigger things going on. It puts it all in perspective for you.”

For even more perspective, realize that talking about Miller-Lauzon II isn’t even a topic at this point. After their 2012 classic, won by Miller, it’s not necessary. Every fan knows that these two will go in there on Saturday with no trash talk, no bad blood and no drama and still put on a Fight of the Year-worthy scrap. It’s a reputation hard-earned by both men.

“I think that’s success,” Lauzon said. “That’s what’s important. I always say I want to have fights people want to watch, and I think that I’ve gotten to the point where people get excited for the fights. I don’t feel like I have to sell the fights. Before I fought Diego, I was telling everyone, ‘I’m buddies with Diego, we’ve always been friendly, always been cool, but we’re gonna try to murder each other.’ It’s kind of the same thing with Jim Miller. I don’t think I have to go and sell people on it. No one thinks that we’re scared to get our hands a little dirty or get cut up. We’re gonna go in there and get after each other, and it’s going to be exciting.”

And for 15 minutes or less, there’s no place Joe Lauzon would rather be.