“I love what I'm doing, I love where I'm at, and I love the people I'm surrounded by,” she said. “I don't know if I could be any happier right now.”

Apparently all it took was a change in scenery from Arizona to the place where she’ll be fighting on Saturday night, Houston. And if you want a look at what a happy Lauren Murphy can do, her third-round stoppage of Mara Romero Borella is exhibit A.

So is it safe to say that she’s a little amped up for her UFC 247 meeting with Andrea Lee after picking up her first finish since 2016? 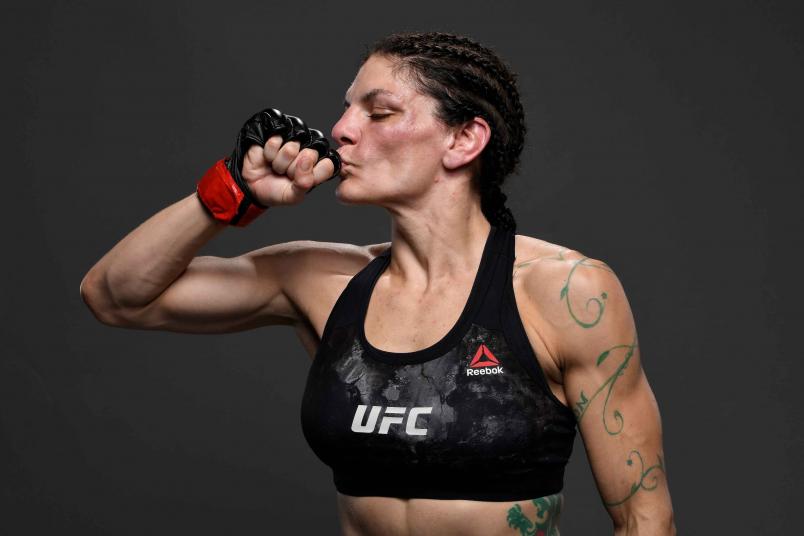 “Hell yeah,” she laughs. “I am a finisher. And I'm gonna be looking for the finish when I fight Andrea too. And I think that's what really sets me apart in the division. I don't just try to jab and run away, I don't try to take you down and lay on top of you. I'm in there to finish girls and I'm trying to hurt them. I just think there's a lot of women that don't fight like I do. I come forward, I look for the finish, I can hurt you anywhere and everywhere and, win or lose, that's what I'm gonna be looking to do.

“The other thing is that I make weight every time,” adds Murphy. “It's easy to miss weight by five, six, seven pounds and then go in there and look like a superstar. That's easy because you're fighting somebody a weight class lower than you at that point. But to make weight every time and go in there and always be looking for the finish, that's really what sets me apart.”

That’s “Lucky” Lauren at her best, speaking her mind and letting the world know exactly what she’s aiming to do on fight night. It does make her a unicorn of sorts, yet as someone who finished her first five fights by knockout, the Alaska native has always put her money where her mouth is. And she believes she owes some of her fighting (and finishing) mentality to her former zip code.

“I think some of it comes just because I'm super tough,” she said. “I'm uber tough and always have been. But I've always believed in my heart that Alaskan girls are just built a little bit different. I think we're tougher than your average bear. (Laughs) I think that's part of it. And then another part of it is that I have coaches that give me such a good game plan and they give me so much confidence when I go to fight that the finishes kind of present themselves. I don't plan on finishing the fight in any one particular way, but having a good direction to go in the fight, having really great practices, having a good camp and having a lot of confidence going into a fight, the finish takes care of itself when all those other things fall into place.”

It’s a deadly combination, Murphy’s toughness coupled with her work with Gracie Barra Katy, Main Street Muay Thai and Renzo Gracie Houston. We almost forgot the happiness part of the equation, but will being so content with life outside the Octagon dull her edge inside it? She admits that’s a valid point.

“For a long time, especially earlier in my career, I was a mess,” Murphy said. “I was just getting sober and my life was not like what it is today. It was really hard. I remember not having a license and having to ride my bike to practice. I always had to be in court to take care of some charge or ticket, I was always in trouble, and I was a wreck. I was really, really broke and I was living by a shoestring. I just didn't have a lot going for me when I started fighting. And I think in some ways, being uncomfortable like that does lend itself to making you tougher. When you have to live uncomfortable, it does make you tougher and you go in there a little bit grittier and you're willing to put up with less s**t and you have to fight harder because you've been fighting harder outside of the ring.”

She pauses, then continues.

“That being said, I'm so happy right now that I wouldn't go back to those days and I've earned my happiness and I wouldn't give it back for anything. I've learned how to compete well no matter what's going on outside, so that means happy or sad, in trouble or out of trouble, comfortable or not, I've learned to compete well despite being comfortable.”

That’s bad news for the flyweight division, but Murphy isn’t trash talking, calling out people or making noise for the sake of making noise. Ask her who’s going to get more cheers on Saturday, the Texas native (Lee) or the Houston newcomer (Murphy), and she’s just hoping the fans at Toyota Center get a fight.

“Hopefully, we'll both knock the crowd off their feet,” Murphy said. “I really hope it's a fight the crowd gets into.”

Murphy knows she will do her part.

So what’s the secret?

“When I was debating whether or not to leave the (MMA) Lab and move to Houston, it was a really big change for us,” Murphy said. “And somebody told me you need to go wherever makes your tummy feel good. And it made so much sense to me that as soon as I got to Houston and I started working with these coaches and I became a part of this camp. I felt like I could finally relax.”