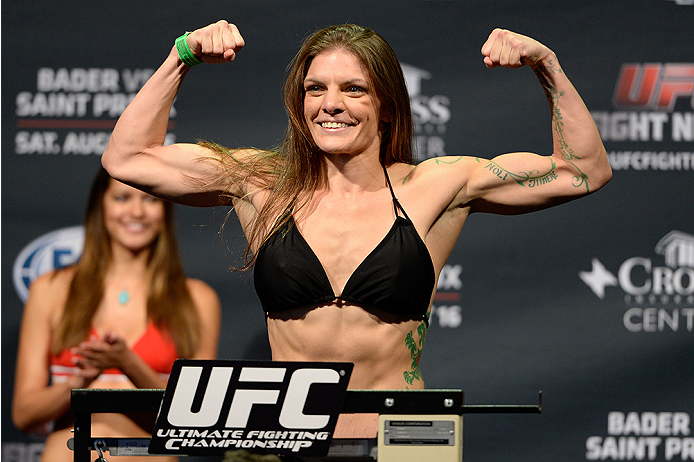 On her most recent UFC bio update, bantamweight Lauren Murphy refreshed her current belt ranks, with a blue belt in Jiu-Jitsu followed by a new entry:

Well, Mrs. Murphy, how does one achieve such a lofty rank?

“Just by kicking ass,” she laughs. “My coach John Crouch said that about me one day. He said ‘whatever happens and wherever you go from here, you’re a black belt in life.’ He was referring to the fact that I was working really hard and he is really happy with the progress that I’ve made.”

To Murphy, it meant more than that though.

“After I started thinking about it, I was like ‘hell yeah, I’m just kicking life’s ass.’ Nobody thought I was going to be in the UFC and fighting top ten opponents. I absolutely love my job, and to me it’s the best job in the world. I get up every day and get to do something that I love, and I get paid to do it. I have a really good family, I love living in Phoenix, and my life is awesome. It’s got a few bumps here and there, but I think it’s far better than I ever expected for myself. I feel really blessed.”

The enthusiasm in Murphy’s voice is evident, and while her desire to win her Saturday bout against Liz Carmouche and eventually challenge for the UFC women’s bantamweight crown is stronger than ever, there is clearly a joy in just being here for the Alaska native, who six years ago had no idea that this would be her eventual destination. But after introducing her son Max to Jiu-Jitsu, she was the one who got hooked by the gentle art, and then MMA.

Becoming a fighter was more than just a change of occupation though. Far from it.

“I would still be in Alaska, I would be in some s**tty relationship that may or may not be on-again off-again, it may or may not be good for me or good for my son. I think I’d be working a s**tty job that I hated behind a desk somewhere and barely making ends meet, trying to pay off student loans and whatever other bills and debt I’d racked up. That’s how I think my life would be if I had never gotten into martial arts. I think I would just be miserable.”

It’s the greatest endorsement for the sport and the redemptive power of it.  So don’t ever talk badly about mixed martial arts, at least not around Lauren Murphy.

“Sometimes I get insulted when people say it to me,” she said. “That would be like me walking into an accountant’s office and saying ‘I could never be an accountant, I think your job sucks, I don’t see how you could be happy doing what you do.’ I would never do that, so I don’t know why people think it’s okay to say that kind of stuff to my face. Everybody’s entitled to their opinion, as long as they’re not saying it directly to me. I know what mixed martial arts did for me, and anybody that’s close to me knows also. I think people who have that negative idea about MMA, their opinions are pretty uneducated.”

Today, there is no desk job for the 31-year-old Murphy. In nearly five years as a pro, she’s won eight fights, including victories over Kaitlin Young, Sarah D’Alelio and Miriam Nakamoto, and she was Invicta’s first bantamweight champion before getting the call to the big show last year. Her first bout in the Octagon didn’t go the way she wanted it to, as she lost a split decision to Sara McMann, and her lone pro defeat took a little getting used to.

“I have good days and bad days with it,” she said of the McMann bout. “I’m really hard on myself and so it took me a little while to process that fight and really think about where I had gone wrong. And once I was able to face that and honestly look at it, that made it better. I think I could have beat Sara McMann; I just went in there with the wrong mindset. It wasn’t about me not being good enough, it’s not about me being totally outclassed; I went in there and I made a mistake and I can live with that idea. So I just worked really hard to make sure that I don’t make that mistake again and I got right back in the gym. Of course losing sucks, nobody likes it, but on the other hand I can take a lot of positives out of that fight.”

One positive is that she wasn’t about to give in under any circumstances, guaranteeing that fight fans would be in line to see her in action again. But on the negative side, there is the idea that the key to beating the previously unbeaten Murphy is to score the takedown and keep her grounded, especially with judges putting so much weight on such tactics.

“We considered that,” Murphy said. “If I were my next opponent, what would I do to beat me? Well, the only person that’s ever beat me did it by just holding me down. So that’s what I had to change. My husband and I would talk about it, and I just thought ‘well, she’s an Olympian, she’ll put me on my back, so I’ll have to beat her from my back.’ And I thought that was possible, and now I know that it’s not. You have to get up. You cannot win a fight off of your back. That’s the biggest thing that’s changed in my mind. I think I could have gotten up when I fought Sara, and I chose not to. That was my mistake. And nobody’s going to be able to beat me like that again because nobody’s going to be able to hold me down.”

Those are fighting words, setting the stage for a good one this Saturday against Carmouche. And you may not want to bet against a black belt in life, one who is enjoying what for most would be a whirlwind ride.

“When I look back at whatever’s happened in the last four or five years, I’m like ‘whoa, that’s pretty crazy,” she said. “But you can’t ever see that kind of stuff when you’re right in the middle of it. You have to be able to step back and take a look as a whole and I can only do that later on down the line with hindsight. I really like the whirlwind feeling. I like when life is moving fast, I like when big things are happening all around me and I enjoy that kind of stuff. I don’t really want my life to slow down.”