Laura Sanko Aces Yet Another Challenge

A week after Dana White’s Contender Series wrapped its second season, Laura Sanko and I jumped on the phone to talk about the incredible impact the summer talent-search series had on the UFC roster, both inside and outside of the Octagon.

In addition to producing scores of intriguing prospects over those two seasons — fighters like Sean O’Malley, Geoff Neal, Alex Perez, Maycee Barber, and Jimmy Crute — the Tuesday night events also became a launching pad for various broadcasters as well, with play-by-play men Brendan Fitzgerald and Dan Hellie getting their starts there, as well as analysts Paul Felder and Michael Bisping, each of whom have since made the transition into the live event rotation.

And there was Sanko too, effortlessly dropping monologues on emerging talents set to step into the cage and interviewing jubilant winners, showing the kind of poise and comfort on the microphone that usually takes years to hone despite having limited experience.

During that conversation, the former fighter, who earned a second-round submission win over Cassie Robb in her lone professional appearance at Invicta FC 4 following an extensive amateur career, expressed a desire to work in the analyst role on the show, joking that she had a ton of opinions that she was struggling to hold in, as well as a want to share her knowledge and passion for the sport that just wasn’t available to her in the reporter role. 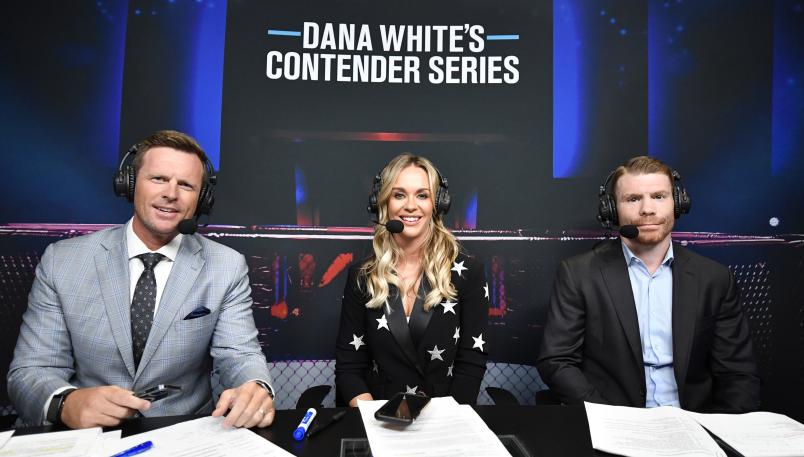 “I don’t know that I’ll ever be able to do it, but that would be the hope,” she said then.

Last Tuesday afternoon, Sanko tweeted out a reminder for fans to tune in to the debut episode of Season 5, adding “… something extra special for this one” followed by the “raising hands” emoji.

Just before the broadcast began, she took to Instagram, sending out a picture of an announcer’s console with her last name scrawled in red marker on a piece of white tape.

“I was nervous; I’m not gonna lie,” she said earlier this week, as we reconnected to discuss her move to the broadcast booth for Season 5. “I was nervous to see if they would be accepting of — part of it is being a female voice, but part of it is transitioning from being in a very traditional female role as a reporter to being in a very non-traditional female role as a commentator, and the fact that it’s the same person.

“There are a lot of people that see me in that reporting role and don’t know enough of the other work that I do to know what my capabilities are beyond that, so I was nervous that I would get the ‘How’d this chick get the job? What is she doing there?’ but it wasn’t like that at all.” 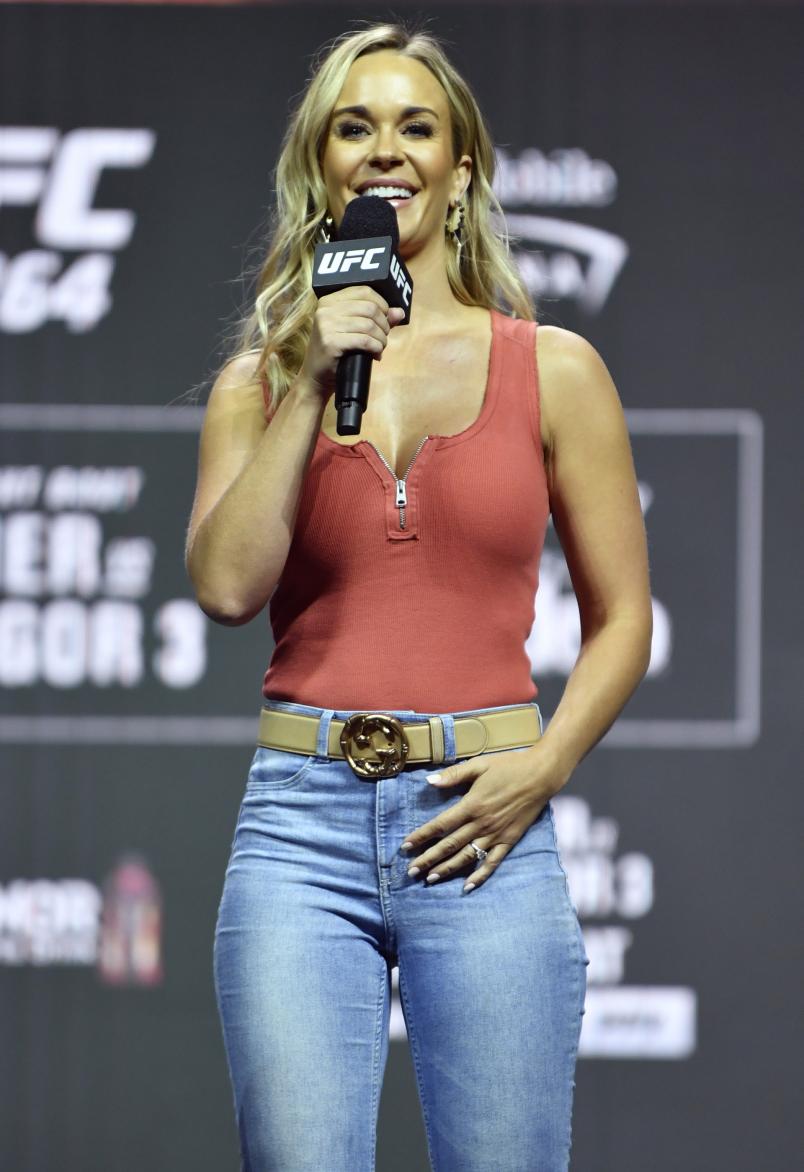 Laura Sanko interacts with fans prior to the start of the UFC 264 ceremonial weigh-in at T-Mobile Arena on July 09, 2021 in Las Vegas, Nevada. (Photo by Jeff Bottari/Zuffa LLC)

While there have been the odd negative comments and standard misogynic nonsense that women encounter on a daily basis simply for existing, the majority of the feedback Sanko has received has been glowingly positive, and for good reason. Through the first two episodes of the season, the 38-year-old Missouri native has transitioned flawlessly into her new role, showcasing her incredible depth of knowledge about not only the athletes competing inside the cage, but the fight game and its intricacies, as well.

Literally and figuratively, she has been a fresh voice in a role that has been exclusively occupied by men, with Sanko becoming just the second female analyst for a UFC event ever, joining combat sports legend Kathy Long, who was part of the broadcast team for the very first show on November 12, 1993.

“The standard is different and that’s okay; I’m willing to take on that challenge,” she said of the increased pressure and scrutiny that comes with being the first female to occupy the analyst role in more than 25 years. “The standard is not only different for me, but with me being the first since Kathy Long, I need to get this right not just for me, but for other females that come up behind me.

“When I first set out to accomplish this goal, at the very, very beginning, it had more to do with what I wanted to accomplish myself, but it didn’t take long for me to realize that it was about so much more than that. 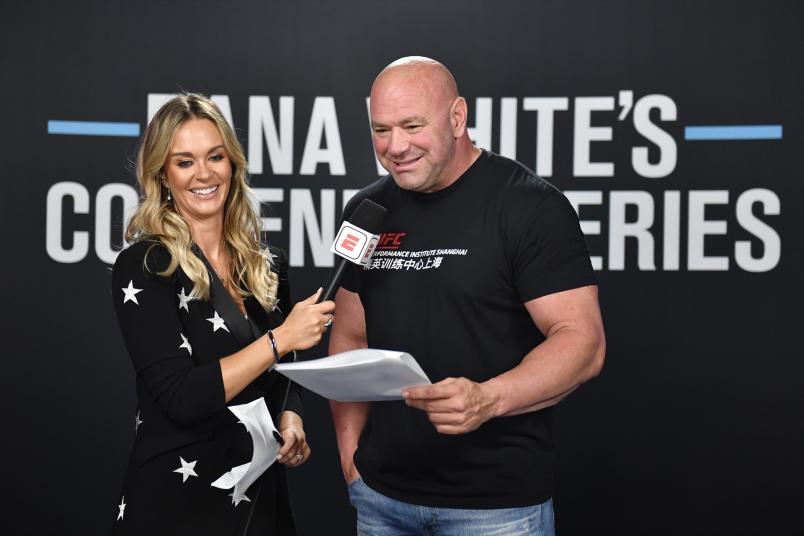 “I feel the responsibility of that and I don’t take it lightly,” continued Sanko, who has been overwhelmed by the amount of parents — specifically fathers — that have reached out to her explaining that they’ve used her shifting into the analyst role as a means to have conversations with their daughters about pursuing their goals and dreams with persistence, even if they’re looking to enter traditionally male-dominated arenas, which is precisely how Sanko landed this opportunity in the first place.

Putting it out there three years ago that she aspired to sit in the analyst chair may have been the initial step towards reaching this goal, but Sanko has put in a ton of work to chase down chances to showcase her abundant skills and tremendous understanding of this sport and its athletes.

Even before the Contender Series was in full swing, Sanko was putting her knowledge on display with the “Aussie & Fancy” event breakdowns she used to do with friend and training partner Megan Anderson, and filling similar roles to the ones she currently occupies on Tuesday nights under the Invicta FC banner.

A Day In The Life Of Trevor Wittman

She then started making appearances on various podcasts and worked on Inside the Octagon, breaking down the action in detail, flexing her deep understanding of the nuances of what transpires during a fight. She sought out the opportunity to be part of the broadcast team for the Legacy Fighting Alliance (LFA) promotion, knocking it out of the park from Day One, and when the UFC introduced its Weigh-In Show earlier this year, she was tapped to join the team, not as a host, but an analyst, again working alongside Hellie and a rotating cast of male counterparts.

And she also logged countless hours doing meticulous research, as well as talking shop and training with her male colleagues, all in an effort to make it clear to everyone that she had the knowledge and skill to thrive in every role, even the ones that had yet to be made available to her. 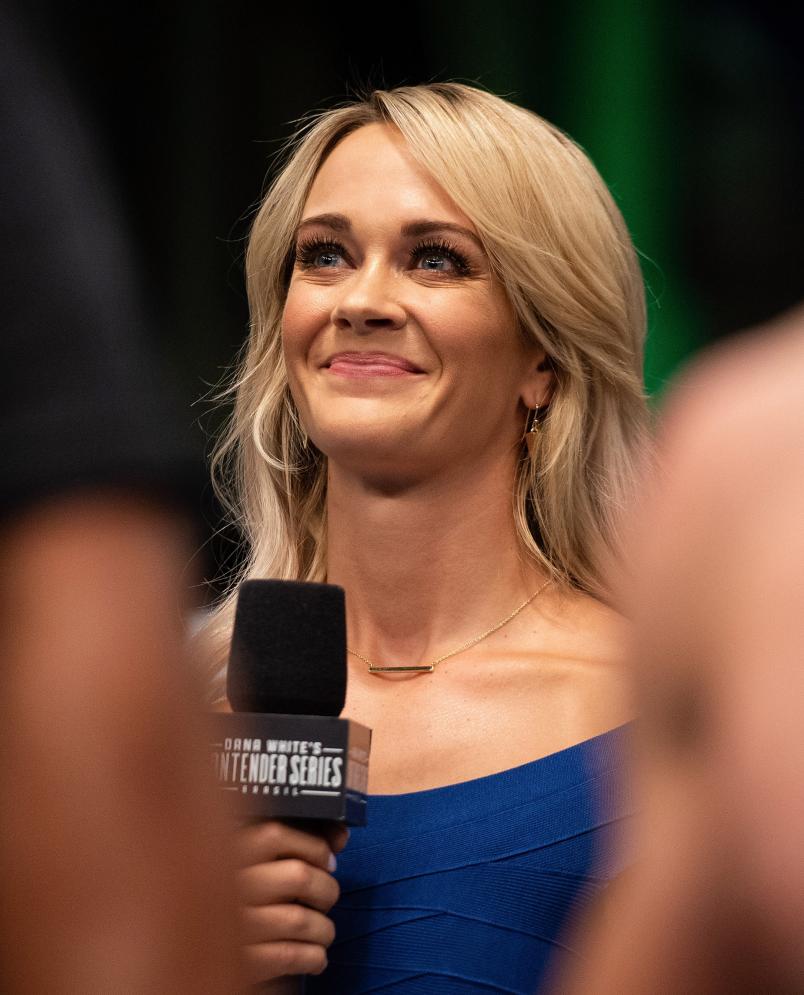 “Over the years, I know I’ve earned the respect of all my male colleagues, but it’s taken time and it happened organically,” began Sanko. “I think it’s important for any woman entering a male-dominated space — I didn’t walk into the room, slam my foot down and say, ‘Respect me!’ because it doesn’t work like that. If you want to be treated as an equal, you earn the respect the same way that anyone else would, and that takes time and natural, organic interactions.

“There were a couple opportunities with Paul (Felder) — and I’m so happy that we had them — where we rolled together and worked out together, so that he could see me in that environment.

“When I’m all dressed up and my hair’s done, it’s easy to not envision me in that environment and doing those things, but I took every opportunity I could to talk shop with him, to work out with him, and all those little things add up over the years so that when the moment came, I knew it would be fine and he wouldn’t treat me any different.”

Having already impressed UFC President Dana White with her work interviewing every single winning fighter in the history of the Contender Series, her stellar work outside of the promotion and then on the Weigh-In Show made it almost impossible not to give her the chance to join in on calling the fights when Season 5 got underway, with Felder in the seat beside her.

“Commentary can be awkward the way that hitting pads with someone for the first time or dancing with someone for the first time can be awkward, even if you’re both good dancers,” she said with an easy laugh. “If you’ve never done it together, you don’t quite know where to put your hands. I think because I’ve listened to Paul so much, and I know Paul so well, it was so easy; he made it very easy.

“I can honestly tell you that I am happy with how I’ve done, and it’s rare that I say that,” she added. “There are definitely five or ten different things where I want to improve and get better, but I’m very happy with how it’s gone.”

In many ways, Sanko’s journey to this point mirrors that of the athletes that compete on the Contender Series, as she too showed up in Las Vegas primed to prove she could excel on Tuesday nights, eager to showcase her skills and, if everything worked out right, take a big step forward in her career.

It may have taken four seasons, but her persistence has finally paid off and now she is thriving in her new role.

“The show that has allowed me, first as a reporter and now as a commentator, to show not just my knowledge, but how much I love the sport, and the fighters, and their stories,” said Sanko, reflecting on her journey and its parallels with the athletes she speaks with every Tuesday night.

“I didn’t quit fighting because I wasn’t good at it — I was really good at it. I quit fighting because there was no future for atomweights and it just didn’t make sense for me to take time away from my son, who had just been born, when my path to glory would have been making $3,000 to show, $3,000 to win for my career. So I think there is a part of me that lives vicariously through every fighter, particularly on the Contender Series, because I always wanted to have that moment of being in the UFC.”

Wow. Thank you @danawhite 🙌🏻 I’m beyond honored by the comparison! (story via @KevinI at @YahooSports) pic.twitter.com/Zpon73Mc4V

Now, having crossed another goal off her career wish list, Sanko already has her sights set on the next opportunity — calling a UFC Fight Night — but she’s also making sure to take in this moment for all that it’s worth.

“I try not to count my chickens before they hatch, but that’s the hope,” she said of calling a live event and following the same trajectory as Felder and Bisping. “Dana did an interview with Kevin Iole where he stated that would be the case, and I’m hopeful for it, but I’m taking things as they come.

“And I’m trying really hard to soak it all in because it’s these full-circle moments that are cool for me,” she added. “The fact that I’ve done it for every single episode is cool, and to have had the conversation we had three or four years ago and be having this one now is really special.

“It’s what I’ve always wanted and it’s what made the traveling and the working and the grinding worth it.”