With the Launch of VetNet, Brian Stann's Biggest Fight Continues 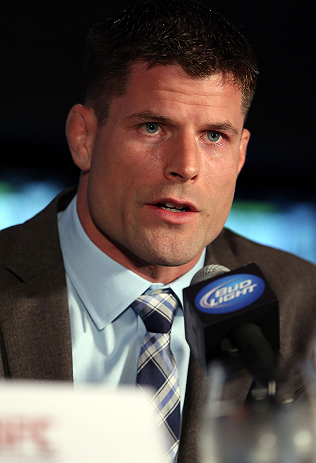 UFC middleweight contender Brian Stann's fight has never been restricted solely to the Octagon, so as the horror stories of war turn into horror stories at home for many who have served the United States in the armed forces overseas only to return to no jobs and little preparation for life after their service is completed, the decorated veteran of the Marine Corps continues to battle daily for his brothers and sisters in arms.

“Time magazine recently did a cover story on the suicide rate of our veterans right now, and there have been years where more veterans died due to suicide than they did in the wars in Iraq and Afghanistan,” said Stann, who also serves as the President and CEO of Hire Heroes USA, which was created to help transition veterans back into civilian life and aid in getting them job training and jobs. “And a major problem is the huge unemployment rate for our veterans right now. For veterans ages 20 to 24 that served in Iraq and Afghanistan, the unemployment rate is well over 20 percent.”

Not surprisingly, Stann, 32, is not giving up the fight, and with the Wednesday announcement that Hire Heroes USA has joined with Google, the US Chamber of Commerce’s Hiring Our Heroes, and the Institute for Military Veterans and Families to create the website VetNet, he’s got some pretty powerful reinforcements.

“It (VetNet) provides these people with one place to go to get all the resources they need for their transition out of the military and into the civilian workforce,” said Stann. “There are 40,000 organizations out there that say they help veterans and advertise that they help veterans, and to be quite honest, not all 40,000 of them are good or really do help veterans. So it could be very confusing. Where should I go, what should I do to get set up for my next career?”

And when men and women are discharged from the military, they’re not exactly eased back into their lives out of uniform.

“The military will generally do a transition assistance program, which is two or three days of very general guidance and training, resumes and job searches, and you’re looking at classes where you have one instructor and anywhere from 50 to 200 service members that are transitioning out,” he said. “So veterans don’t get an awful lot from that program and when they get out, it’s on them to take charge of their future and compete in the employment market and find their next career.”

Not to mention that while there are several organizations out there that do good work, several others are well-intentioned but not really helping, and some are just not helping at all.

“It’s tough and you have to focus a lot on word of mouth and asking fellow veterans which organizations are for real and which aren’t,” said Stann of the obstacles facing returning vets in finding the right resources to get on the right track to finding a job. “The big problem is that some of the organizations that really don’t do a very good job helping veterans, they don’t realize they don’t do a good job. They honestly think they do, and they think by throwing a couple events and advertising and spending a bunch of donated dollars on free giveaways is actually helping veterans transition when that’s not the case. Veterans don’t need free stuff and they’re not asking for free stuff and they’re not looking for handouts; they’re looking for professional advice. And just like any regular college graduate activates their alumni network when they graduate to go find a job, that’s what veterans are looking to do. And that’s what we’ve put together here so that they don’t need to go searching around and sifting through organizations that won’t necessarily help them and they can get the latest and up to date content and resources to help them at one place.”

And as Stann points out, the muscle Google possesses has helped separate the good from the bad for VetNet.

“What Google has done here is that they went out and did a lot of due diligence and they went and chose who they believe – and their partners believe – are the best in class in each individual area, and that’s how Hire Heroes USA, the US Chamber of Commerce’s Hiring Our Heroes program, and the Institute for Military Veterans and Families were chosen to be part of VetNet and how it was created.”

As for the website itself, it’s cleanly designed and easy to navigate, with clear areas for each specific goal of the visitor.

“There are three training tracks depending on where a veteran is in their transition,” he said. “The basic training track, which is powered by Hire Heroes USA, the organization that I’m leading, is where you’re going to go to begin working on your resume, your cover letter, your value proposition and your interview skills. And we’ve put all of our best resources on this website and we’ll be doing a lot of Google Hangouts, where we’ll be able to answer personal questions for all the veterans that need help, conduct training online, and really use Google’s resources to reach thousands more veterans. And every time we do this, it’s recorded and it’s added to the resource library in that track. And the two other tracks that are on VetNet are more of your career track and entrepreneur track, which are powered by the US Chamber of Commerce and the Institute for Military Veterans and Families.”

Sounds like this fight has just begun, but Stann is in for the long haul.

“This allows us to help many more thousands now.”