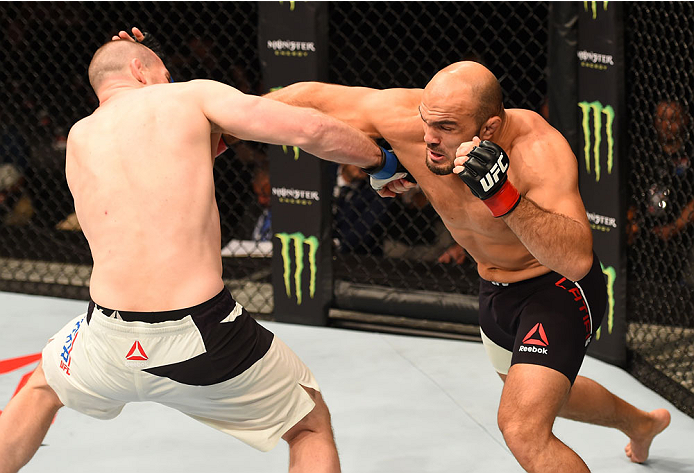 Not to put any pressure on light heavyweight contender Ilir Latifi before the biggest fight of his career against Gian Villante at UFC 196, but if he’s to keep the momentum going from a 56-second knockout of Hans Stringer and a 28-second finish of Sean O’Connell, the numbers say he’ll have to end Villante’s night on Saturday in 14 seconds.

“I always prepare myself for a tough fight and Gian Villante is a tough fighter with a lot of experience, and I have a lot of respect for him,” he said. “So I always go for the finish, but I'm prepared to go the distance too. Whatever situation comes, that's what I'm going to take.”

It would make a heck of a story if he pulled it off, but then his next fight would have to end in seven seconds and, well, lotteries have been won with better odds. But with another finish or even a three-round war with the New Yorker, Latifi could garner his first post-fight bonus as a member of the UFC roster.

“I have three knockout finishes and one submission, all in under one round, and I wanted that bonus every time, but I didn't get it,” he said. “So I don't know what I have to do to get that bonus.”

The best advice would be to keep doing what he’s doing, as Latifi’s aggressive style and power befitting his “Sledgehammer” nickname has garnered him four UFC wins. The equally aggressive and powerful Villante is on a hot streak of his own, making this main card battle an early Fight of the Night candidate.

“There are always holes in everyone's game, but I see the potential of this being a war and Fight of the Night, so let's see what happens on March 5th,” he said.

What can be said is that Latifi will show up to fight, something he’s been doing professionally since 2008 and in the UFC since 2013, when he got a late call to face Gegard Mousasi in a main event fight in his home country of Sweden. How late?

“The first fight, people know what I went through,” he said. “I took the fight on three days' notice, I cut 28 pounds, I hadn't trained for two months, and I went the distance. That's a totally different story than coming into a fight prepared. After that, I said ‘okay, now I really have to show what I can do.’ So I kept myself in shape, always good on weight, and everything has turned out good. We're competing in the toughest sport in the world, and we've always got to be ready.”

It was a lesson Latifi took to heart, and every time since, he knows that anything he faces from here on out can’t compare to what he went through for the Mousasi fight.

What makes a fighter go through that in search of victory and opportunity is what makes them fighters. And it’s a noble profession Latifi enjoys being a part of.

“The difference between other sports and fighting is that you play football, you play soccer, you play tennis, you play golf, but you don't play fighting. And that's the thing. You can find the fighting spirit in everything else and it's something universal. Everybody can relate to the fighter, but not everybody can live that moment in the Octagon in front of thousands of people and millions of viewers around the world and being able to achieve what these guys do. I have respect for every guy that gets into that Octagon and does his best. That takes a lot of courage and honor and everybody should be proud.”

4-1 since that decision loss to the current middleweight contender, Latifi has made steady progress in the Octagon, and with a move from Sweden to the United States, where he now trains with American Top Team, everything seems to be coming together at the right time for him, even if some adjustments were tougher than others.

“Most of the adjustments have been positive,” he said. “Being closer to the big events overseas and training at the big gym, everything has been positive in that way. The only thing that's not as positive is being without your family and close friends and being so far away. So you're starting over.”

He’s willing to make those sacrifices though.

“My aim is that belt and I know I can beat anybody in the top ten, so just give me the opportunity,” he said. “But the focus is on this fight and this obstacle and preparing for this fight and winning that. And after that, keep climbing.”