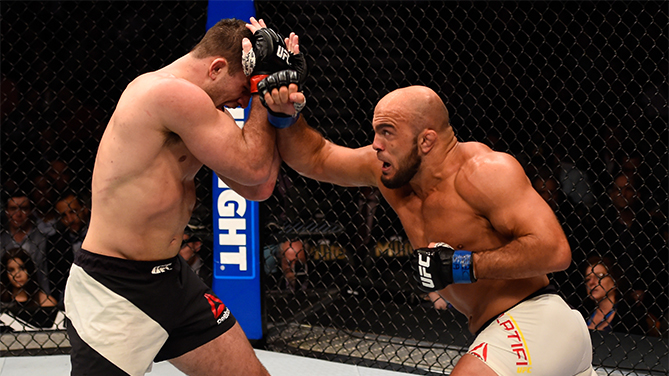 The expected slugfest between light heavyweights Ilir Latifi and Gian Villante didn’t materialize on the UFC 196 main card, but Sweden’s Latifi won’t complain about the shutout three-round decision he picked up Saturday at the MGM Grand Garden Arena.

The unanimous decision read 30-27 across the board.

Long Island’s Villante started strong behind a series of kicks, but for the majority of the round, he was forced to defend takedowns while also trying to stay upright when Latifi used hard haymakers to set up clinches against the fence.

In the second minute of round two, Latifi finally got his takedown, throwing Villante to the mat to do so. Surprisingly, Villante shook the thudding ride off and got back to his feet quickly. He would get taken down again before the end of the round though, adding to Latifi’s lead.

With Villante rapidly tiring, Latifi had his best round in the third, landing several jarring lefts to the face while putting another takedown in the bank to secure his decision victory, which raises his record to 13-4, 1 NC. Villante falls to 14-7.

Lawlor had early success with his striking, jarring Anderson with accurate shots as the two exchanged blows. Eventually, Anderson settled into a groove and was able to land consistently with 1-2s, but whenever the fight moved to the inside, it was Lawlor scoring with the more telling blows.

The second was more of the same, Anderson controlling the outside and Lawlor having more success on the inside, but it was more Anderson than Lawlor until the closing seconds, when “Filthy Tom” got in some hard shots that could have earned him the round.

A minute into round three, Anderson exploded into his first takedown of the fight, and quickly settled into side control. Ground strikes followed as the Illinois native tried to improve his position, but referee John McCarthy restarted the action with a little over a minute to go. Back on the feet, there was little scoring of note before the final horn.

There was little scoring in the opening round, and what scoring that was done came from the fists and feet of Nunes, who aggressively chased Shevchenko, who only fired back with punches sporadically before being taken down in the closing minute and kept there until the final seconds of the frame.

Shevchenko put her foot on the gas to begin the second frame, but a trip to the mat ended up with Nunes on top and in control. “The Lioness” proceeded to unleash a steady, but punishing, ground attack, bloodying Shevchenko and nearly submitting her before the end of the round.

Nunes’ attempt for a takedown as round three began backfired, as Shevchenko ended up in side control as the two fell to the mat. Working for a kimura, the Peru product nearly pulled it off before Nunes escaped and scrambled to her feet. In the clinch, “Bullet” scored with some knees and appeared to be making a late-fight rally, but it wasn’t enough to turn things around on the final scorecards.