A look back at the last two UFC Fight Night events in Indianapolis and Belo Horizonte... 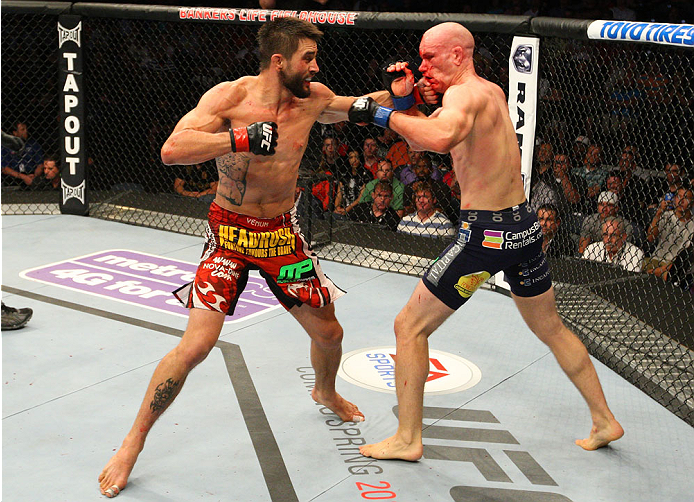 A KILLER’S DILEMMA
So what happens with Carlos Condit after his impressive fourth round TKO win over Martin Kampmann on August 28th? That’s a dilemma I’m glad I don’t have to deal with, because it’s clear that “The Natural Born Killer” is in that peculiar no man’s land that is home to those who are good enough to be champion, but who have fallen short of grabbing the gold. Personally, I would love to see Condit against the winner of November’s Georges St-Pierre-Johny Hendricks title fight, but will he get that opportunity against someone he has lost to (in this case both GSP and Hendricks)? Probably not with Rory MacDonald, Robbie Lawler, Demian Maia, and Matt Brown all waiting in the wings. But I’ll say it here: Condit may very well be the best 170-pounder not wearing a belt, and his performances against Kampmann, and Hendricks, and GSP, and Nick Diaz have proven it.

DOS ANJOS THE QUIET CONTENDER
No one has had a quieter five fight winning streak than Rafael dos Anjos, but with his win over Donald Cerrone, there should be more spotlight on the versatile Brazilian in the coming months, and that spotlight should lead him to another fight against a top ten foe, maybe a Josh Thomson or Jim Miller. With a victory in such a fight, he will have earned title fight consideration beyond a shadow of a doubt.

IS GASTELUM THE NEXT JONNY JONES?
There were plenty of eyebrows raised when The Ultimate Fighter season 17 winner Kelvin Gastelum was matched up with veteran Paulo Thiago for his welterweight debut. There should 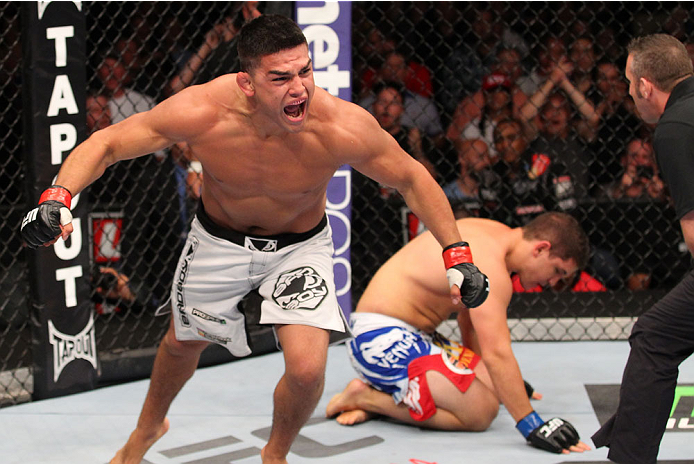 be less skepticism after Gastelum’s first round submission win over Brian Melancon in Indy. Sure, Melancon is no Thiago on the ground, and he doesn’t match the Brazilian’s UFC track record, but he’s a tough vet who should have been a stiff test for the youngster. But Gastelum continues to impress, and the fact that he’s doing so at the age of 21 is even more notable. This is a kid who may soar up the ranks sooner rather than later.

THATCH BRINGS THE RUKUS
Speaking of quick starts, it was hard not to be dazzled by newcomer Brandon Thatch’s Knockout of the Night win over Justin Edwards. Of course the Colorado native did come to the UFC with a reputation for a fast finisher, but to do it under the bright lights and against an established foe like Edwards makes it an impressive accomplishment. I know, I know, we’ve seen rookies blast out of the gate and then falter, but I am looking forward to seeing what Thatch does in the future.

MIZUGAKI MOVES FROM GATEKEEPER TO CONTENDER
Erik Perez was the next big thing at bantamweight, but in Indianapolis, Takeya Mizugaki was the truth machine, letting “Goyito” know that he still needs a little more seasoning before challenging the bantamweight elite. That’s something Mizugaki has specialized in over the years, with many UFC fans forgetting that in the WEC, the Japan native battled the likes of Urijah Faber, Scott Jorgensen, Rani Yahya, and Miguel Angel Torres. In the UFC, he started out 2-2, but with three straight wins, he’s on the verge of the top ten with another big victory. That’s good to see, even if it’s only because we might get to witness another emotional post-fight reaction from the Kanagawa product, who, at the very least, shows that he cares about what happens in the Octagon. 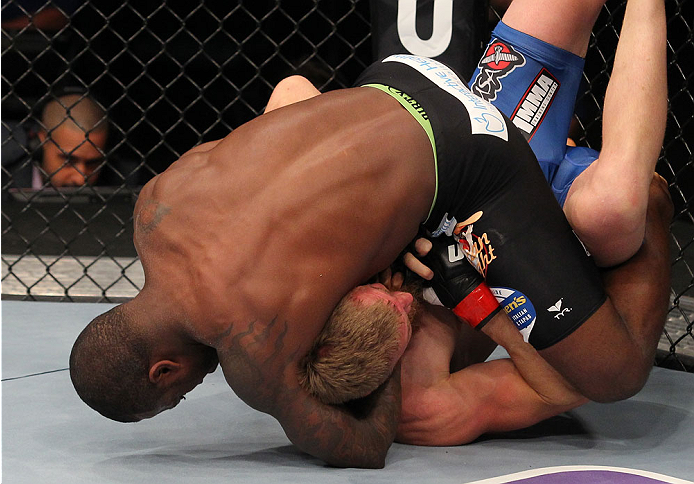 When you’ve been around the sport long enough, you get a little bit of a soft spot for the veterans who finally get their opportunity in the big show, and when they finally win in the Octagon, it’s impossible not to smile. This was the case with Jason High’s win over James Head, one that came for “The Kansas City Bandit” in his third try. And High didn’t just squeak out a win; he finished Head in the first round via guillotine choke, guaranteeing that there will be plenty of eyeballs on this welterweight vet’s next bout. He’s earned it.

GLOVER NEXT IN LINE AND RIGHT ON TIME
Glover Teixeira certainly went through the gamut of emotions in the space of 2:55 seconds against Ryan Bader in Belo Horizonte, Brazil on September 4th, apparently on the verge of a knockout in front of his home state fans before knocking Bader out moments later. The win was his 20th in a row, and it earned him a shot at the winner of September 21st’s Jon Jones-Alex Gustafsson light heavyweight title fight, but Teixeira was far from satisfied with the victory. That’s good news though, because it shows that a win isn’t enough for the Brazilian, who will likely engage in the training camp of his life when it’s time to challenge for the belt. Does he have enough to get the job done? Only time will tell, but getting rocked by the heavy-handed Bader (and Fabio Maldonado before that) shouldn’t have people diminishing his chances.

HOW DO YOU STOP JACARE?
Few have gotten their UFC career off to a better start than Ronaldo “Jacare” Souza, and after the 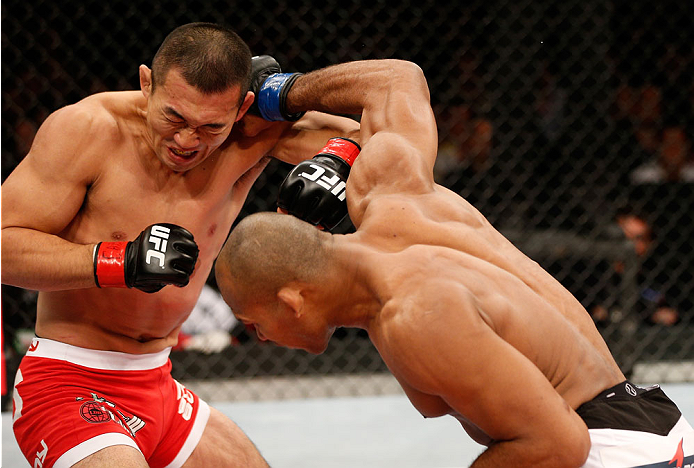 former Strikeforce middleweight champion’s first round TKO of Yushin Okami, it’s hard not to see him as a favorite against anyone not named Chris Weidman or Anderson Silva. Souza’s stellar ground game is already an established entity, but now that he’s knocking people out, what do you do with the Brazilian if you have to fight him? Hope for the best, I guess, because “Jacare” is scary.

BENAVIDEZ THE CLEAR NUMBER ONE AT 125
Much like welterweight contender Carlos Condit, Joseph Benavidez is in no man’s land when it comes to a return fight for a UFC title. Winner of three straight, two by knockout, since his September 2012 loss to current king Demetrious Johnson, Benavidez has earned his second shot at the belt, but will he get it? I think he should. Welterweight is crowded at the top, keeping Condit at bay, but at 125 pounds, the division is wide open, and no one has stepped up as a clear number one contender quite like “Joe B Wan Kenobi” has. And considering how good the first Johnson-Benavidez fight was, a rematch would be a welcome one.

THE EUROPEAN REVOLUTION
Europe used to be far behind the United States, Brazil, and Japan when it came to top level mixed martial artists, but that isn’t the case anymore. Just look at the September 4th UFC Fight Night in Brazil, where Poland’s Piotr Hallmann and Russia’s Ali Bagautinov both picked up finishing wins and Sweden’s Tor Troeng impressed in a Fight of the Night loss to Rafael Natal. This is a continent on the rise, and you can expect to see more and more standouts in the years to come.

MARTINS DOING THE CHUTE BOXE NAME PROUD
When you see the name Chute Boxe associated with a fighter’s name, you expect a certain something. Well, Lucas Martins has delivered that certain something in his last two fights, knocking out Jeremy Larsen and submitting Junior Hernandez. So what is that something, owned by the likes of Chute Boxe alums Wanderlei Silva and “Shogun” Rua? It’s an attitude that this isn’t a sporting event, but a fight, and if you get someone hurt in a fight, you finish. That’s what Martins brings, and watching him develop in his new weight class at 135 pounds should be fun.