“He’s a competitor like myself, I see us having a really great fight, and let the best man win.” - Clifford Starks 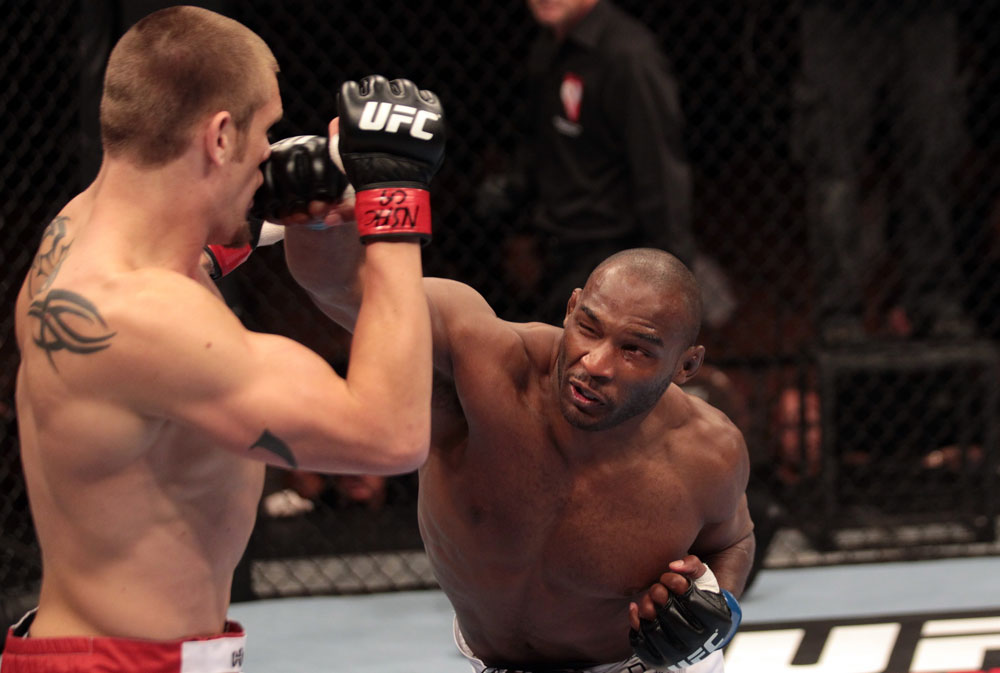 The names are familiar to UFC fans: Cain Velasquez, Ryan Bader, Aaron Simpson, CB Dollaway. So it’s really no surprise that Clifford Starks is the latest Arizona State University wrestling alum to make it to the UFC.

Is it something in the water?

“I think it might be the barbecue,” laughed Starks, a teammate of Velasquez who, despite being the second to graduate (behind Simpson) from the aforementioned group, was the last to turn pro.

“I wasn’t really thinking about it (fighting) at the time,” said Starks, who earned his Kinesiology degree in 2005. “I got into personal training right when I finished wrestling, but I missed being competitive.”

And flag football on the weekend just wasn’t going to cut it, right?

“The funny thing is, that’s what I was doing,” he laughs. “But I always knew that I was gonna compete in something. What I was going to compete in I just didn’t know at the time.”

Eventually though, watching his former teammate and the rest of the ASU crew begin to make their mark in mixed martial arts piqued his interest.

“I started seeing them moving up and making names for themselves, and I was always staying in training shape,” he recalled. “I did a couple bodybuilding shows, but seeing the success that they had definitely made me consider giving it a try. It was a great step towards maintaining something that’s similar to what I already knew.”

In December of 2009, Starks dipped his toe in the MMA pool for the first time, submitting Chad Menneke in the second round. Now hooked on the sport, Tempe’s Starks continued fighting and winning, showing off that ASU pedigree that fans were beginning to get accustomed to from those wearing the maroon and gold.

“I really think it’s the mental toughness aspect and the workouts that we would go through,” said Starks when asked the biggest aspect of ASU training that he brings into MMA with him. “They would really work us to where nine out of 10 guys would be throwing up afterwards. So when you go through something like that, you just kinda think that fighting’s no big deal. It is, and it’s very intense, but to go through the things we went through makes the transition that much easier.”

That’s not to say his October 2011 call to the UFC was an expected one. 7-0 as a pro, Starks had just finished up a three round decision win over Artenas Young on October 15th when his phone rang on October 21st. Did he want to replace the injured Brad Tavares and fight Dustin Jacoby at UFC 137 in eight days?

“You made it to the big show, let’s see what you’ve got,” thought Starks, who admits that the short notice call helped him stay focused on what was important – the fight – and not about the idea of making it to the big show.

“It made it a little bit easier mentally because you really didn’t have time to think about it. You just had to jump on the opportunity and go from there.”

On that fall night in Vegas, Starks took the opportunity and ran with it, winning a shutout three round decision over the previously unbeaten Jacoby to improve to 8-0, and he did so without showing off any first time UFC jitters. Unless he was hiding them well.

“I was hiding it a little bit (Laughs), but once you get into the Octagon and the ref asks if you’re ready to go, you’re into fight mode, and that probably comes from my wrestling background a little bit too. It (winning on short notice) built up my self-esteem in that area, knowing that I can take something like that and make a good situation out of it.”

His reward for the big win? A main card slot on this Saturday’s UFC 143 card against veteran Ed Herman. It’s a big step up in competition for the 30-year old, but that’s nothing he’s concerned about.

“I feel it’s something that I’m ready for and I trained for very diligently, and we’ll just see what happens from there when the bell rings,” said Starks. “He’s a competitor like myself, I see us having a really great fight, and let the best man win.”

Clifford Starks plans on making sure that best man is the one from Arizona State University.

“I’m just gonna go out there and give it my all, fight my gameplan, and then see who comes out on top,” he said. “The way I feel about it, win, lose, or draw, this is such a large opportunity for me that I think I’m gonna learn from this experience regardless. Obviously I want to come away with the victory, and then I’ll revamp my gameplan from there. I always want to improve, I always want to be the best.”