'The Last Stylebender' Adesanya wows in debut on UFC 221 prelims

Heavily hyped middleweight Israel Adesanya didn’t disappoint in his Octagon debut, as he kept his perfect record intact with a second-round stoppage of Rob Wilkinson.

Wilkinson was tenacious in his attempt to ground Adesanya throughout the opening round, and while he put his foe on the mat twice, the Nigeria native jumped right back up. Overall, it was mission accomplished for the Aussie, though, as he was able to nullify the offense of the highly-touted newcomer.

Adesanya began to get into an offensive rhythm in round two, and he mixed his strikes up well before another quick takedown by Wilkinson. But as soon as Adesanya got up, he began to open fire on his bloodied foe, and after a series of unanswered shots, referee Steve Perceval intervened, with the official time of the stoppage 3:37 of the second round.

"The rest of the strikers in this division...you're on notice." -- @jimmysmithmma

The expected fireworks didn’t materialize in the UFC 221 prelim bout between lightweights Dong Hyun Kim and Damien Brown, but in a close three-round battle, it was Kim emerging with the victory at Perth Arena via split decision.

Brown worked his leg kicks well in the opening round, but Kim did land the better and more telling blows upstairs, allowing him to likely take the round. It was more of the same in the second and third frames, with Brown not showing his usual sense of urgency as Kim potshotted his foe and bloodied him with the harder shots. The Aussie veteran was scoring, though, with his low kicks continuing to make their mark on the “Maestro,” making the fight closer and closer down the stretch.

The fourth UFC win from Australian featherweight Alex Volkanovski may have been his most impressive, as he halted previously unbeaten Canadian Jeremy Kennedy in the second round, improving his current winning streak to 14.

Volkanovski had a dominant first round, as he took Kennedy down and kept him there until the final minute of the frame, all the while firing off thudding ground strikes intended to not just score points, but to end the fight.

And while Volkanovski didn’t get the finish in the first, it came in the next round, as his relentless ground-and-pound attack prompted referee Marc Goddard to call the bout at 4:57 of the second stanza.

Windang’s Volkanovski ups his record to 17-1 with the win. Surrey’s Kennedy falls to 11-1. 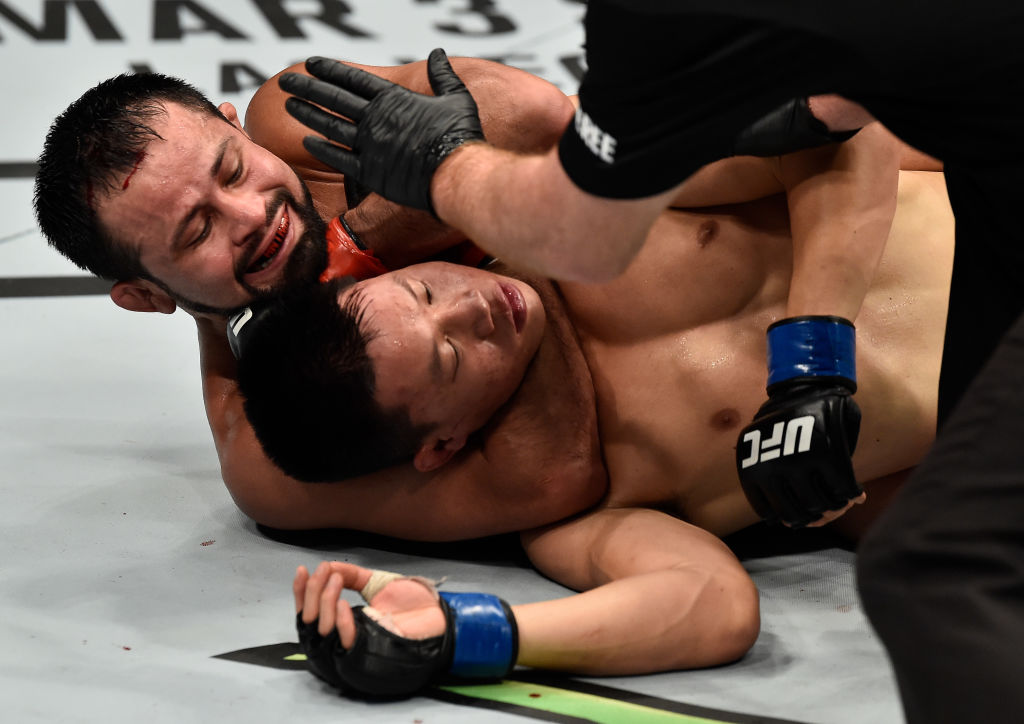 With his second consecutive finish, perennial flyweight contender Jussier Formiga may have finally drawn within striking distance of a title shot, as he submitted Ben Nguyen in the third round.

Nguyen’s ability to keep the fight standing was solid in for much of the opening frame, but with a little over two minutes left, Formiga got his foe to the mat and kept him there until the end of the round.

Formiga did get cut by an elbow to the forehead early in round two, but it didn’t deter him from his quest to get the fight back to the mat, and he did once more, but this time Nguyen was able to get to his feet just before a minute was remaining.  A late round eye poke by Formiga added to Nguyen’s woes, but he made it out of the round and had five minutes to turn things around.

Things would only get worse for Nguyen in the final frame, though, as he was dropped hard by a spinning backfist by Formiga in the second minute, and moments later, a rear naked choke ended matters at the 1:43 mark of round three.

Using a disciplined offensive attack that teamed up perfectly with an improved defensive game, Pearson held off Hirota, and while he ate several leg kicks and was rocked briefly late in round two, “The Real Deal” was a step ahead throughout, making the final call an easy one for the judges.

Quinonez’ grappling kept Ishihara on the defensive throughout the first round, but just before the horn ending the frame, a left hand by “Yashabo” rattled the Mexico native briefly.

The second was close, but it was another left hand late by Ishihara that hit its mark, this time dropping Quinonez just before the horn sounded.

In the third, though, Quinonez secured his win with a busy and accurate striking attack, with Ishihara just not doing enough to get his hand raised.

New Zealand welterweight Luke Jumeau pounded out a hard-fought win in the opener, as he removed Japan’s Daichi Abe from the ranks of the unbeaten via unanimous decision.

Both fighters were throwing bombs in the opening round, with Jumeau staggering Abe with a left hand in the second minute but the Tokyo native coming back stronger with right hands that dropped Jumeau and marked his face up.

Jumeau scored an early takedown in the second to switch things up a bit, and as Abe tired, Jumeau’s measured attack allowed him to even the fight up on the scorecards and then surge ahead in the final frame, with two leg kick-induced knockdowns earning “The Jedi” the win by scores of 29-28, 29-27 and 28-27.