Last Call for "Lights Out"

Chris Lytle to retire after Sunday's bout with Dan Hardy 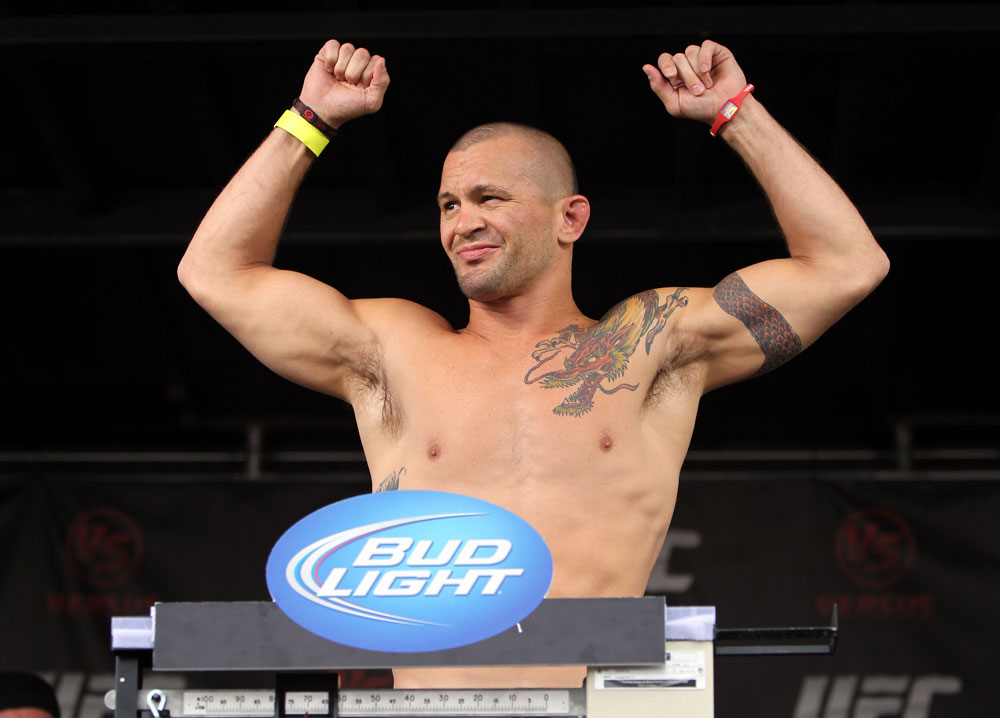 MILWAUKEE, WI – At this moment, fighters around the UFC are breathing a sigh of relief, knowing that now they have a better chance of winning a post-fight bonus. The reason for this reaction was Saturday’s news that longtime welterweight standout Chris “Lights Out” Lytle, the King of the post-fight award, has informed the UFC that his Sunday fight with Dan Hardy in the main event of UFC Live at Bradley Center will be his last.

The decision comes after more than 12 years in a sport that the Indiana native has given his life to. And while there are many who claim to leave it all in the ring every time out, Lytle actually did it, and though some will say there are better records than his 40-18-4, none had more blood, sweat, and tears invested in them than Lytle’s.

But with a wife and four children to spend more quality time with, as well as a possible run for political office in 2012 upcoming, the soon-to-be 37 year old realized that it was the right time to hang up the gloves. You can rest assured that Lytle’s feelings about the fight night and the sport haven’t changed though.

As he told me in the lead-up to the Hardy bout, “That is the fun part for me. That’s really the payoff and the part I enjoy. I can usually do a good job of pretending nobody else is there, I’m not being watched by anybody, and I’m just in there with that one person, and we’re just fighting.”

The rest of it? He could probably do without. A full-time fireman for the Indianapolis Fire Department as well as husband and father, Lytle’s life as a fighter in the formative years of the sport saw him able to get away with one training session a day. But after appearing on (and making it to the finals of) The Ultimate Fighter’s fourth season in 2006, he realized that to keep up with the young guns of the sport, especially in the welterweight division, he would have to change his lifestyle considerably.

“I gotta tell you, it became real hard now,” said Lytle back in 2006. “Just being on the show let me kinda realize how I need to be training. Before, I never really trained more than once a day. I’m incorporating that into my training now, and it’s really, really difficult for me right now to achieve everything. I’m trying to go to work, trying to spend time with my family, and trying to get my training in. I have absolutely zero time for anything else. My friends ask me to do things and I can’t do anything.”

The results were revealing though. Following his razor-thin decision loss to Matt Serra in the TUF4 finale, Lytle ran off an 8-5 record, with eight of those bouts resulting in a Fight of the Night (five times), Submission of the Night (two times) or Knockout of the Night (once) bonus. Only one other fighter has achieved such excellence in the Art of Excitement, and that’s middleweight champion and pound-for-pound boss Anderson Silva.

“I don’t think people can understand the amount of pressure, though I don’t know if that’s the right word,” he said in 2010, recalling the first Serra bout. “I trained for a long time and there was a lot of money on the line and a title shot and I spent six weeks on that show for one reason – to make a lot of money for my family and to get a title shot. A lot was on the line and the same thing goes for Matt. So going into that fight, I never thought anything besides stop the takedown and don’t lose. If you stop the takedown, he can’t beat you. It was all about me not losing the fight, instead of me saying I was gonna try to knock him out or submit him and win. And it was the same thing for him. Neither one of us went out there to win; we went out there to not lose. And it was a close fight, a split decision, and it was hard to score because nobody went out there to win. After that fight, I said not only does the loss really hurt me, but it felt even worse because I didn’t even go out there and fight the way I wanted to fight. I said no matter what, I’m gonna fight the way I like; if I win, if I lose, whatever, at least I can go out and say I fought my way. And since I started fighting that way, I feel like I’m fighting better, it’s been more exciting, people like it, and I don’t feel as if there’s as much pressure on me.”

Winner of four in a row over Kevin Burns, Brian Foster, Matt Brown, and Serra in 2009-10, Lytle was going through a late-career resurgence until a decision loss to Brian Ebersole in February of this year (albeit another Fight of the Night winner) snapped the streak. One streak that has remained untouched over the last 12-plus years is the one of Lytle as good guy of the game. One of the few people that no one has anything bad to say about, “Lights Out” is as genuine as it gets. Even all his opponents like him. And for someone as accessible with the media as Lytle is, I was still able to stump him once when I asked in 2010 if he ever had bad blood with anyone he fought.

“I’m sure there’s had to be,” he laughed.  “I can’t think of anybody I’ve intensely disliked. There have been some who may have rubbed me the wrong way or I didn’t like the way they carried themselves, but I can’t really think of any I really disliked. I don’t necessarily know too much about these people and I think I’ve had a reputation for a long time as being a pretty respectful guy, so everybody usually treats me pretty respectfully. Even a lot of guys who I’ve heard bad things about, they tend to treat me pretty good, so if that’s all I know about them, I try not to judge them on what I hear. So if they treat me good, I have a hard time disliking them.”

And it would be impossible to dislike Lytle, in or out of the Octagon. You could selfishly want him to stick around so that you could see some more instant classics from a man who made that his M.O., but after a career full of giving to the fight community, it’s time for him to take something for himself and his family, and no one deserves it more.

It’s also been forgotten that in addition to everything else Lytle has done over the years, he also went 13-1-1 as a pro boxer from 2002 to 2005, earning a top 30 ranking in the WBC and even a call from another reality show, NBC’s “The Contender.” So while he has never held a UFC championship belt, he is still leaving an enviable legacy in the world of combat sports.

As for tonight’s bout with Hardy, expect the same thing you always did with Lytle – a fight. Win or lose, he will give everything he has from bell to bell. That has never changed and that’s the easy part for him. The tough part will be the first fight card without his name on it. As he said before the second Serra bout, the sport eventually becomes more than just a sport.

“I don’t know if the word is that I’m addicted to it, but I just love to compete, and there’s nothing I’ve ever found to equal the overall feeling you get after you’ve struggled so much and put so much into something and then come out on top and achieve something,” he said. “Most of the goals you have in your life never become tangible at one point, but this does. You put everything into this one fight that you’re training for, and when you win it, it’s like everything you worked for in your whole life has been successful. It’s a great feeling. So I’m kind of addicted to that feeling.”

And fight fans have become addicted to Chris Lytle fights. So enjoy this one. You know he will.