"I’m looking to put the pressure on him, stay away from his big left hand, take him down and beat him up a little bit." - Danny Castillo 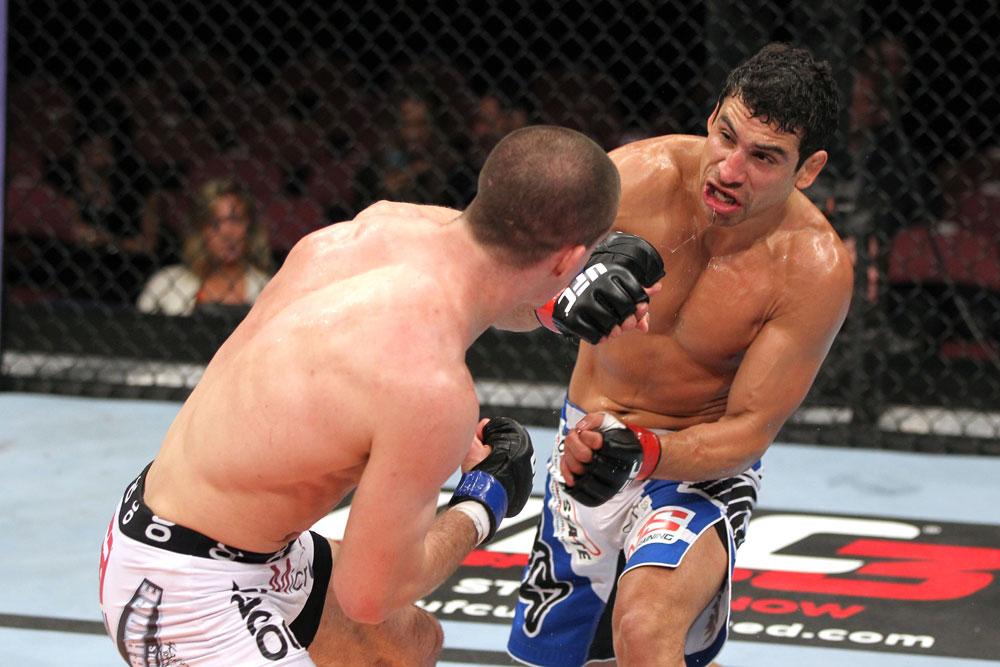 The last time lightweight prospect Danny Castillo (14-4) was inside the Octagon, a New Jersey crowd was booing his effort against John Cholish, a full-time commodities broker and Renzo Gracie-trained fighter who’s fighting style pretty much nullified his own at UFC on FOX 3 in May.

“A part-time fighter who makes it into the UFC, that’s pretty impressive to me,” says Castillo of the All-American wrestler from Cornell. “A lot of people thought that was a boring fight, but that was a technical battle. I prepared well for him and I’m glad I did. John’s a good all-around guy. I try to not like my opponent as much possible, but he and I have a lot in common and it was hard not to like the guy.”

The Team Alpha Male fighter next faces Michael “The Menace” Johnson (12-6) at UFC on FX 5 on October 5th. It's a little later than they expected, as the two were scheduled to meet on the now cancelled UFC 151 card on September 1st, but both guys are coming off victories and looking to creep up the ladder toward title contention in what is perhaps the deepest division in all of mixed martial arts.

“He’s a very athletic guy,” Castillo says of his Team Blackzilian opponent. “He’s fast and he’s got great hands. I see some holes in his game. I think his ground game is questionable.  I’ve been working on my ground game a lot lately. I’ve seen him break in a couple of fights. I’m looking to put the pressure on him, stay away from his big left hand, take him down and beat him up a little bit.”

Taking people down is what defines Castillo. Although he works his striking daily with Master Thong at Ultimate Fitness in Sacramento, California, wrestling is his base and is what got him into MMA in the first place.

“I lost my last wrestling match in college and it didn’t sit well with me,” said Castillo.
Like most smaller guys fighting out of Northern California, Urijah Faber was the catalyst for a career that not only keeps Danny in the gym, but has landed him on national television in commercials and on The Ultimate Fighter Live: Team Cruz vs Team Faber. Faber looked up his old high school buddy on MySpace and invited him to come home to train.

“After college I was working in sales, so I had money, but I was partying a bunch and the competition I had in the wrestling room was competition I took over to the bars, which was not such a good idea. At around that time my high school buddy Urijah Faber was doing big things. The WEC was starting to blow up, it was just getting on TV. He and I wrestled on the same traveling all-star team, and every summer we’d go up and down the west coast in an 18 passenger van wrestling other all-star teams in the area and we developed a friendship. I went out to visit him in Sacramento where he had a gym, three houses, he was on TV and he had money and I was like, ‘man I could live the same life I did in college with training all the time,’ and he said ‘It takes a certain kind of person to be a fighter and I think you have it.’ At the time it was hard to give up a good paying job, but the more and more I went to work the more I wasn’t happy. I was 28 years old and I just figured what the heck, so I quit my job, packed up a U-Haul and moved back to Sacramento and I haven’t looked back since.”

Castillo hasn’t lost since making his UFC debut against Jacob Volkmann a little over a year ago. Volkmann dominated that match and took a unanimous decision by controlling most of the ground game.

“I came home from that match, threw a gi on and worked my ground game with a vengeance,” he said.

Castillo made his WEC debut in 2008 after stepping in for an injured Richard Crunkilton to take on Cowboy Cerrone. He lost that bout, but it set the bar high for his expectations for his career. Now, with the WEC folded into the UFC, Castillo is hoping to have the same impact on the division as Cerrone has of late.

“That was an awesome fight,” Castillo says of Cerrone’s drubbing of former teammate Melvin Guillard at UFC 150. “He got Fight of the Night on a fight that lasted 76 seconds. Cowboy was my first loss in my first fight in the WEC. I lost in the first round by armbar and the rest is history.”

Castillo has fought at least three times a year since then, but he says he’d like to ramp it up to four times per year if he can stay healthy.

“My lifestyle is that I need the money every three months,” he says, laughing. “As long as I’m healthy I like to fight as much as possible. My hobbies revolve around fighting. I like to cycle, I like to run, and as long as those are my hobbies I’m always going to be in shape and always looking to take a fight on short notice. If the matchup is right I will do it. The money,” he says, “is always right.”