Last April, Chad Laprise ran his record to a perfect 10-0 professional record by earning a victory in a “dig deep and gut it out” performance against Bryan Barberena at UFC 186 in Montreal.

The duo won Fight of the Night honors and the effort earned Laprise another gold star for his resume. Combined with an unblemished record, a great team in his corner and his TUF Nations victory under his belt, “The Disciple” was tabbed as the top Canadian prospect on the UFC roster and the next potential title challenger to come out of the Tristar Gym in Montreal.

As such, Laprise was an obvious addition to the UFC’s inaugural event in Saskatoon last summer, and his matchup with Brazilian veteran Francisco Trinaldo was positioned as a litmus test for the promising lightweight. With a victory, the Chatham-Kent, Ontario product would take another positive step forward in one of the deepest, most talent-rich divisions in the UFC and many expected that’s exactly what would happen.

Two minutes into the opening round, Trinaldo connected with a winging overhand left that floored Laprise, and while the Canadian locked up and pulled guard looking for a chance to recover, his plan ultimately backfired. The Brazilian passed to half guard and quickly took Laprise’s back when he tried to get to all fours and get back to his feet. From there, it was academic, as Trinaldo flattened him out and rained down unanswered shots until referee Herb Dean jumped in to wave it off.

Everyone reacts to losses their own way and that first one can definitely shake you, so how have the last seven months sat with Laprise?

“It’s been great,” the 29-year-old said of the time since his first professional setback. “I think it’s the best thing that could have happened in my career.”

Those sentiments are similar to those shared by Chris Weidman during UFC 196 fight week in Las Vegas, when the former middleweight champ was forced to address his title loss to Luke Rockhold at UFC 194.

Like Laprise, Weidman entered the bout undefeated and favored to win, but American Kickboxing Academy product Rockhold played the part of Trinaldo, outpacing the Long Island native and eventually collecting a fourth-round stoppage win to claim the title and banish Weidman from the ranks of the undefeated.

While he couldn’t admit it initially, Weidman is now comfortable calling the loss a positive for his career – something that has forced him to fine tune his game and break away from the routine he followed throughout his unbeaten streak. 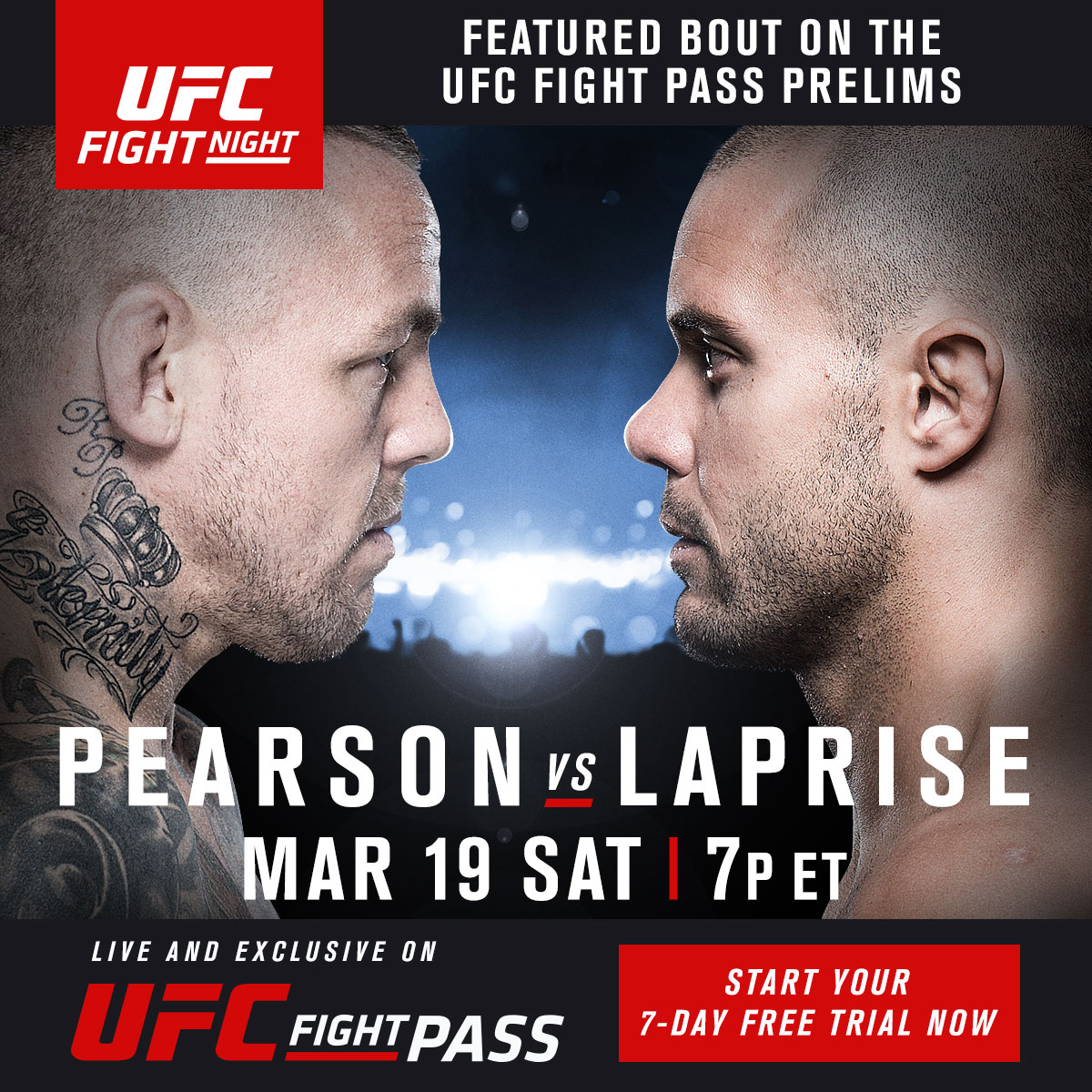 One of the shifts Laprise is making in the wake of his first loss is venturing outside of Canada to compete for the first time.

“I love fighting in Canada and I will fight as much as I can in Canada, but knowing that there were no Canadian cards coming up, I actually asked the UFC to fight on this card in Australia,” Laprise said of his inclusion on Saturday’s UFC Fight Night event in Brisbane, where he replaces Abel Trujillo opposite British veteran Ross Pearson in the featured UFC FIGHT PASS preliminary card fight.

“I’m going to go down there and do my thing and there is definitely less pressure,” continued Laprise, who was originally slated to square off with Brazilian Alan Patrick. “With me winning The Ultimate Fighter Nations, it was against Australia, so I have a lot of fans down there and it’s always been a place that I wanted to go, so I said, ‘I’ll go fight down there.’ It’s more of a hassle with the travel for things like cutting weight, but I think it’s going to be fun.”

As much as he’s excited to get to Australia and catch up with his pals from TUF Nations, including the four Aussies that will also make the trip into the Octagon on Saturday night in Brisbane, the bigger thing for Laprise, obviously, is getting the chance to return to action and start moving in the right direction again.

“Physically, I was fine – I was never knocked out cold or anything – but I definitely had a broken heart for that whole night,” he said, thinking back to that night in the Prairies. “But when the sun came up the next day, I realized it was just a fight and I just got caught. I realized life goes on and I picked myself up from there and it brought me back to this point.

“I’m more motivated than ever now,” he added. “I was so used to winning all the time and that feeling of losing didn’t sit well with me. I can’t wait to get back in there and get back into the win column.”