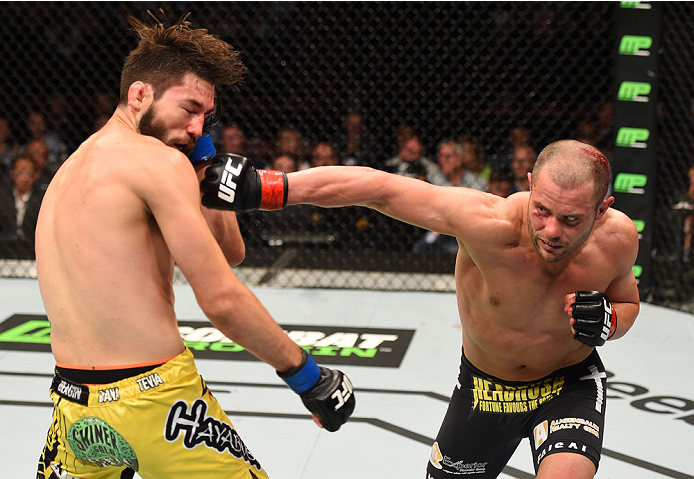 Chad Laprise may only be three fights into his UFC career, but the TUF Nations winner already feels like a seasoned Octagon vet as he heads into bout four against Francisco Trinaldo this Sunday in Saskatoon.

“It feels like I’ve been here a long time,” he laughs. “I started filming The Ultimate Fighter that in October of 2013, so I wasn’t officially in the UFC, but in my mind I’ve been a UFC fighter since then.”

During his time on TUF Nations, Laprise was the quiet competitor who simply showed up and went to work when it was time to fight, and then flew right back under the radar. By the time the show ended, Laprise had wins over Chris Indich and Kajan Johnson, the latter win earning him Fight and Performance of the Season awards, and he was off to the finals and his UFC debut against Olivier Aubin-Mercier in April of 2014. Again, Laprise kept it low-key until fight night, when he upset the previously unbeaten “Quebec Kid” while keeping his own perfect record intact. 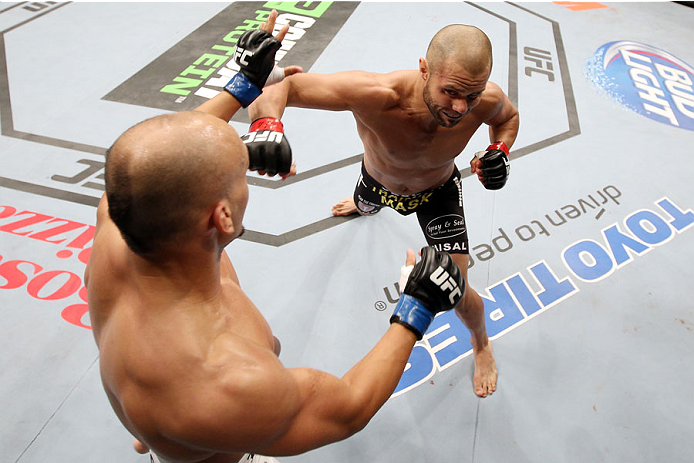 Nothing much has changed since then for “The Disciple.” He’s still winning, still keeping the noise he makes confined to the eight-sided Octagon, and still among the top prospects of Canada’s latest wave of UFC standouts.

For him to keep moving in the right direction though, he will face his toughest test to date in Brazil’s Trinaldo. Not the biggest name, but the biggest test, and one who has quietly snuck up on his fellow lightweights with a steady, yet unspectacular, style that has led him to consecutive wins over Leandro Silva, Akbarh Arreola and Norman Parke.

“I’m undefeated in my career and I’m 3-0 in the UFC, which is no easy task,” Laprise said. “But fighting Francisco Trinaldo, he’s probably the most experienced guy that I’ve ever fought, and I’m really looking for a breakthrough performance in this fight. He’s definitely one of those middle of the pack guys who’s been around. He’s got ten fights in the UFC and if I get a big, impressive win over him, that will definitely set me apart.”

On the other side of the Octagon, Laprise’s “0” is the next target on the hit list of “Massaranduba,” but the Ontario native isn’t going to be caught by surprise this weekend.

“I’ve had my eye on this guy for a while,” Laprise said. “He beat my teammate from London, Ontario, Jesse Ronson, in the UFC, so when he beat him, that was in the back of my mind that I was going to get that fight back and get that win for him.”

Not surprisingly, Laprise and Ronson have been trading notes on the Brazilian. 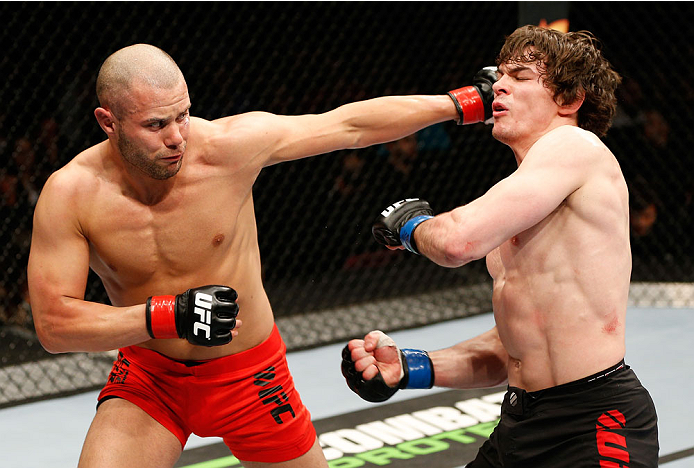 “I’ve talked to him (Ronson) all the time about this fight,” he said. “So I’m picking his brain, and while I obviously fight for myself, an extra win for him won’t hurt.”

Another win certainly won’t hurt the progress of Laprise, who should be closing in on a top 15 ranking in one of the UFC’s toughest divisions by the end of year if he keeps the Ws coming. That’s the plan at least, and it’s hard not to be impressed by the 29-year-old, who showed an evolving game and plenty of grit in his most recent victory, a Fight of the Night decision over Bryan Barberena at UFC 186 in April. It’s the kind of fight Laprise always expects, so when it comes, he’s well prepared, like he will be again on Sunday.

“I’m definitely more of a well-rounded striker and I’m very technical, but you’ve seen in every one of my fights that I bring fireworks all the time,” he said. “Including my fights on The Ultimate Fighter and the UFC, I have five fights and three bonuses. So I’m always setting a high pace and I’m always bringing an entertaining bout to the fans. I fought some very tough guys in my career, and obviously Francisco is not going to be any walk in the park, but I’m gonna bring the fight to him and there’s nothing that’s gonna stop me.”