“Perfect would be if I win by submission in the second round,” Lansberg said with a smile.
By Gavin Porter, on Twitter: @PorterUFCnews • Sep. 26, 2019

It was like a moment out of a movie.

From the second that Lina Lansberg started her walk to the Octagon in June, she was overwhelmed with emotion. She had waited her whole UFC career to fight in Sweden and she took full advantage of it.

Lansberg was brilliant, battering Tonya Evinger with her striking on the way to a unanimous decision victory. It will be a night that Lansberg won’t soon forget.

“It was definitely the greatest moment of my career,” Lansberg said. “Not just because it was a great fight, but also because I got the possibility to create something together with the crowd of Stockholm.”

Just over three months later, Lansberg is ready to get back to work and this time she won’t be too far from familiar turf, as she will be in action this weekend at UFC Copenhagen, which is just a 30-minute drive from the ranked bantamweight’s home.

It will be the UFC’s first event in Denmark and she hopes that she will be able to build on that magic she captured in Stockholm. In order to do that, she’ll need to defeat Macy Chiasson, an undefeated finisher who brings great power and size to the division.

It’s a challenge that Lansberg welcomes with open arms.

“Macy is super tough; she is really strong and big and she finishes her opponents,” Lansberg said. “But she likes to have her way. And I think that when she faces somebody like me that has a lot of experience, I think that it’s going to be tough for her.” 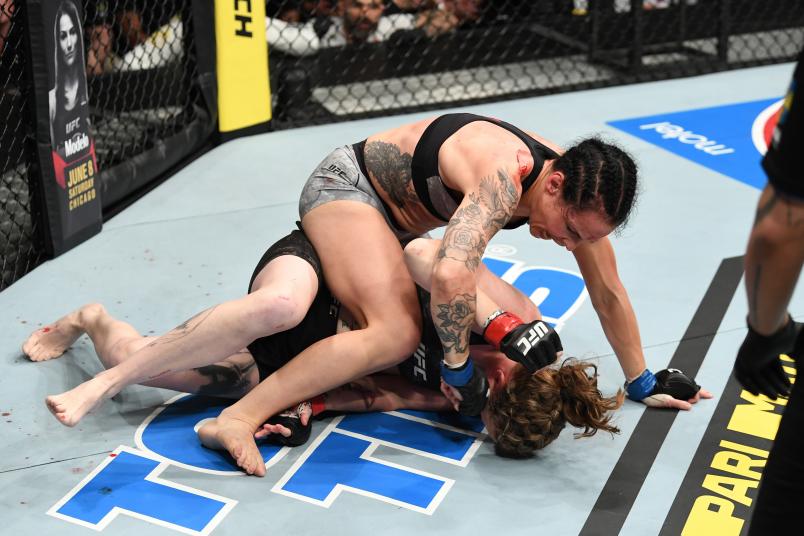 “The Elbow Queen” believes that experience and technique are two of her biggest keys to victory against Chiasson, who is currently 6-0.

“I definitely think this is going to be a really, really tough fight and there’s going to be a lot of blood   and definitely a war,” Lansberg said. “I have to be focused on being tougher than her. Also, she’s really tall, so it’s really important for me to set the tempo and work with the distance on my terms.”

With Amanda Nunes set to defend her bantamweight title against Germaine De Randamie at UFC 245 in December, Lansberg believes that now is the time to make moves in her division.

“She (Chiasson) is higher ranked than me,” Lansberg said. “All fights in this division against somebody ranked higher than me is a fight on the way up. So I think it will definitely do that [help her improve her position in the division].”

Lansberg’s win in June at UFC Stockholm was perfect. So if she could draw it up, what would be her perfect ending to UFC Copenhagen?

“Perfect would be if I win by submission in the second round,” Lansberg said with a smile.

Make sure you tune in to see if Lansberg can keep the ball rolling against Chiasson in what will be an exciting fight on the UFC Copenhagen prelims. The prelims start at 11am/8am ETPT on ESPN+, with the main card kicking off at 2pm/11am ETPT.