"Groovy" Veteran Talks About His Featherweight Debut Saturday At UFC 262
By E. Spencer Kyte, on Twitter @SpencerKyte • May. 10, 2021

“Remember when I fought that Marc Diakiese?” Lando Vannata asks rhetorically in his signature laid back, “give it to you straight” delivery. “That’s what made me want to shift, man.”

After making his first 10 appearances inside the Octagon as a member of the lightweight division, Vannata returns on Saturday night in the first featherweight bout of his career, taking on former Commonwealth Games bronze medalist Mike Grundy in what should be a spirited affair.

“The only fight in the UFC where I was the bigger guy was (John) Makdessi and the only fight where I fought a guy my size was (David) Teymur,” continues Vannata, reflecting on the bouts that solidified his decision to drop down a weight class ahead of his 2021 debut. “Every single guy I’ve fought, I felt like I was the smaller guy and Diakiese was the biggest example of that.

“That guy was huge — I feel like he was massive compared to me; so strong — and then after losing to Bobby (Green) last year, it felt like something needed to happen. When I made the commitment to go to ’45, I said, ‘Burn the ships; there’s no going back now’ and here we are.”

While the move down to featherweight wasn’t planned around anything other than feeling undersized and coming off a disappointing loss to Green in August where the duo took home Fight of the Night honors, the timing of the shift feels right as Vannata has 10 appearances under his belt and is closing in on the anniversary of his explosive debut opposite Tony Ferguson in Sioux Falls, South Dakota. 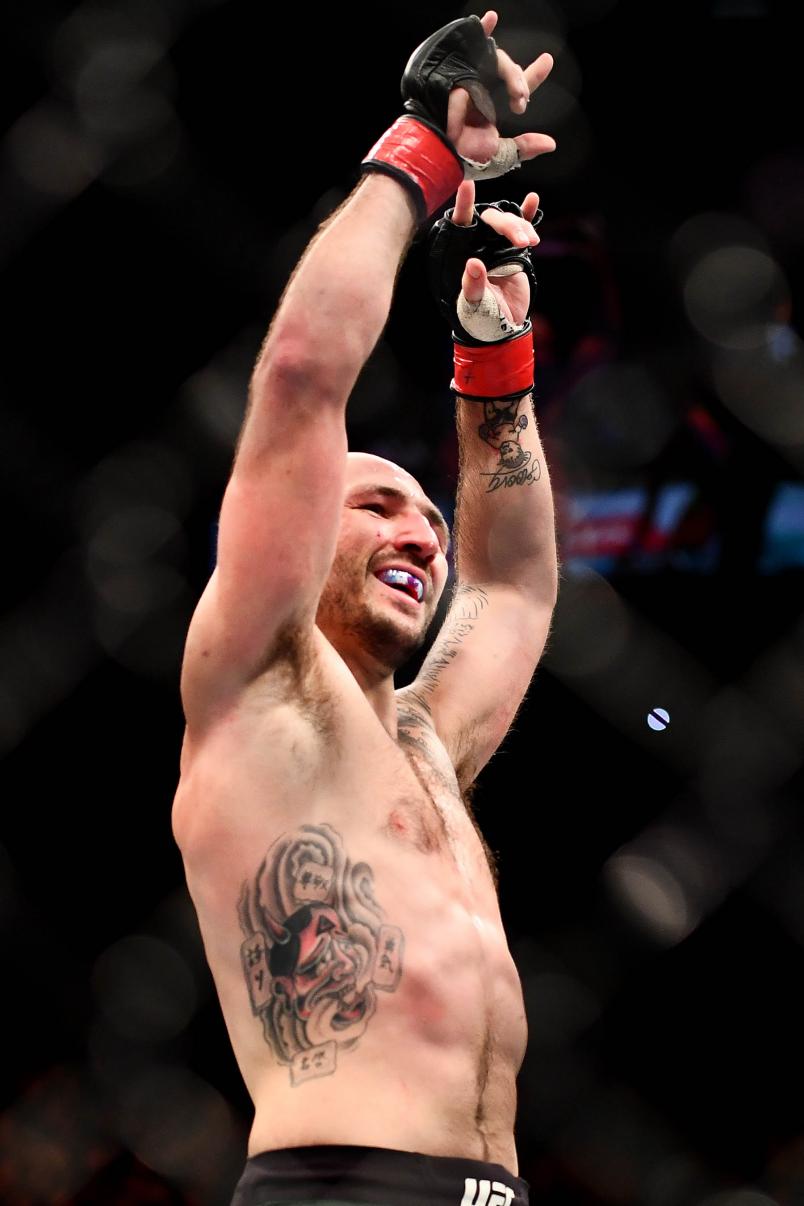 Entering the contest with an undefeated record and standing as one of those regional talents insiders viewed as someone with lofty potential, Vannata made an instant impression over seven minutes and change, coming out of the gates quickly and going shot-for-shot with the streaking contender before ultimately succumbing to a Brabo choke midway through the second round.

He and Ferguson shared Fight of the Night honors, and five months later in Toronto, Vannata picked up a Performance of the Night bonus when he knocked out Makdessi with a spinning wheel kick to register his first UFC victory. Six months and two fights into his time on the biggest stage in the sport, the then 24-year-old New Mexico resident was being heralded as a dark horse contender in the 155-pound weight class.

Five years later and sporting a one-of-a-kind 3-5-2 mark inside the Octagon, the now 29-year-old Vannata is brutally honest about that first appearance and the impact of his first two fights under the UFC banner.

“It is very difficult as an athlete to be on the outside of your own self, looking in, and not buy into your own hype when you haven’t had it before, and I was a victim of it,” he says. “I bought into my own hype.

I look back at (the Tony Ferguson) fight now, I look at my skill set then, and I hate watching that fight because I feel like my skill set was trash. From a skill point, from a physicality point, I feel like I was lazy in my preparation and too confident in my skills in spots where I shouldn’t have been confident. I’m not happy with that performance at all.

“I think it’s trash, but at the time, because so many people said, ‘That was wonderful. You’re the future champ; the dark horse of the division’ and all these awesome accolades and compliments people rained down upon me, I bought into it.” 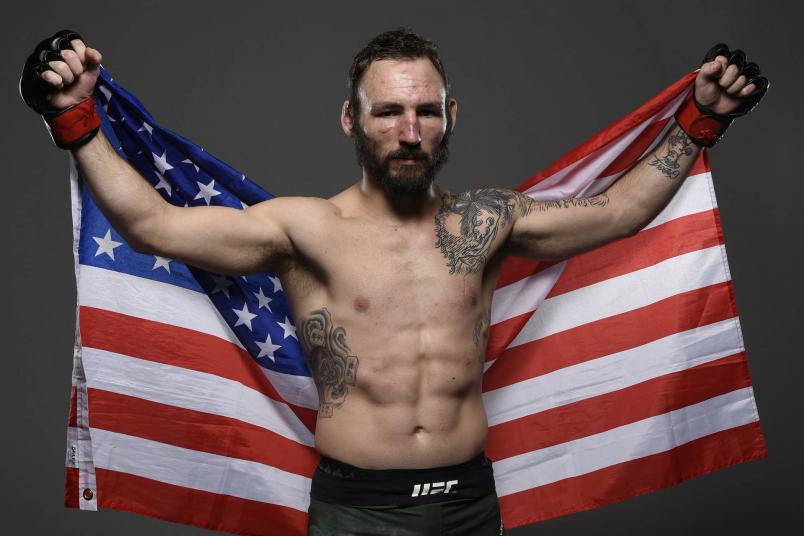 While the results haven’t always been there, Vannata’s free-flowing style and allergy to being in a boring fight have allowed him to remain a fixture on the UFC roster for the last five years. Despite his unique record, he’s also never lost consecutive contests either, which certainly helps things as well.

As we discuss the ups and downs of his career and the process of deciding to transition to featherweight, I mention a recent conversation I had with middleweight contender Uriah Hall that centered around fans and media wanting athletes to arrive in the UFC as finished products and fully formed versions of themselves when the reality is that it takes most competitors several years to get acclimated to life in the UFC and become the best version of themselves, if they’re fortunate enough to get there.

“I’m glad you mentioned Uriah Hall, man, because I gather a lot of inspiration from that guy,” says Vannata, who trains at Jackson’s MMA Acoma in Albuquerque, preparing for this camp with the likes of Ray Borg, Kevin Aguilar, and Yair Rodriguez, as well as a host of other high level training partners and coaches.

“He (Hall) is a great role model to have in this sport because he’s been through the ups and downs, thick and thin — gone through the mental uncertainties, he’s talked about depression, and he’s a real down to Earth dude that has all the potential in the world and has let it slip in the past. But now we’re seeing the fruits of his labor and letting it shine, and I take a lot of inspiration from that because I see a lot of that in myself.”

“So does this feel like an opportunity to show people the full complement of what you can do, rather than being the flashy, quick guy fighting these bigger guys at lightweight?” I ask. 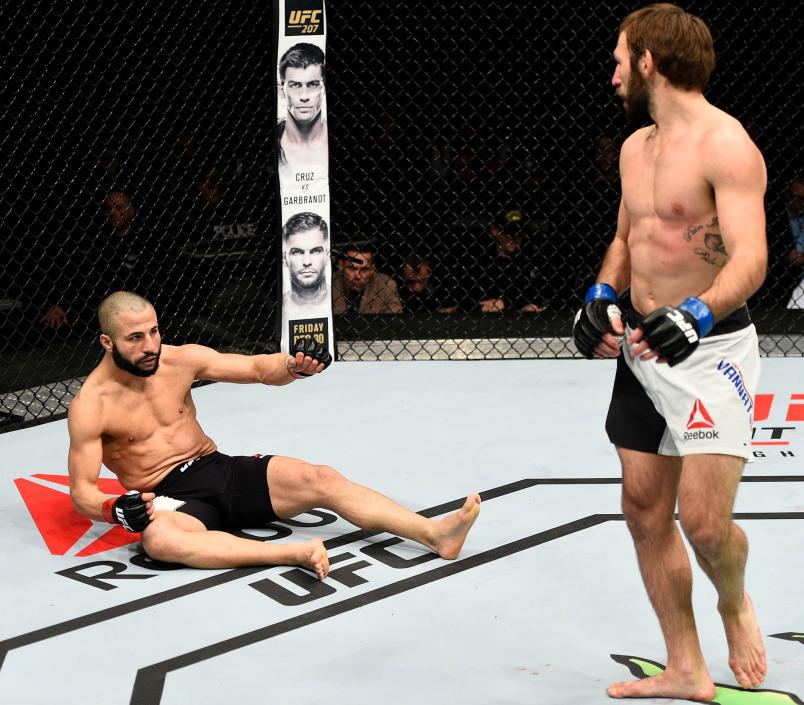 Lando Vannata knocks down John Makdessi with a kick in their lightweight bout during the UFC 206 event inside the Air Canada Centre on December 10, 2016 in Toronto, Ontario, Canada. (Photo by Jeff Bottari/Zuffa LLC)

“It’s like f***ing Hov said, man, ‘Allow me to re-introduce myself,’” he responds, dropping the opening lyric from Jay-Z’s “Public Service Announcement” interlude on The Black Album.

“Dropping weight classes is not the only change I’ve made,” he adds. “There has been an entire overhaul, but I’ll play it coy with the other changes; keep it on the DL.”

Just as the aforementioned Hall had peaks and valleys in his career before connecting with Coach Sayif Saud and the team at Fortis MMA in Dallas, which has helped him unlock a different level of consistency and success inside the Octagon, Vannata needed to learn the lessons the past five years have imparted on him and do some serious self-reflection in order to reach the point where he could make the changes needed to become the best version of himself as a fighter.

“I would say I wish I took it more seriously from the start,” he says, reflecting on his first five years in the UFC. “I wish that I would have been less lazy in my preparation — more committed, more consistent — but I’m also very thankful for what I’ve learned, where I’m at, and the fact that now I’m the most consistent person I know and the most committed person I know.

“I wish I learned to be less emotional at an earlier stage, but I think that comes with age and life experience. There are a lot of things I could say I wish I did differently, but the fact of the matter is that where I’m at now, I’m happy, I’m healthy, I feel like a stud every day in practice, even when I’m going with guys that are way better than me, and I’m ready to rock this division.

As we wrap, I ask Vannata what it’s going to feel like to go out there on Saturday night, compete in a new weight class, feeling as good as he does, and get his hand raised.

I thank him for his time and tell him I can’t wait to see him compete at UFC 262 and he quickly interjects.