"They probably forgot about me, but I look forward to making them all remember." - Lance Benoist 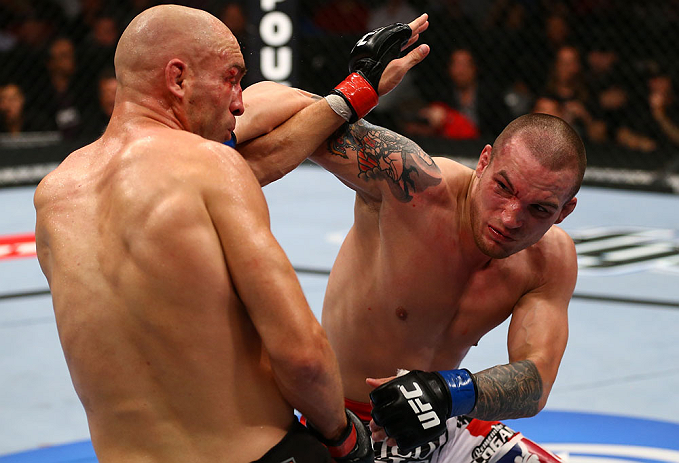 Lance Benoist has seen more than most 25-year-olds, and when you say that, what usually follows is a tale of hard times. The St. Louis native has certainly had his share, but as he prepares for his return to the Octagon this Saturday after a layoff of nearly 21 months, he holds no grudges against his past.

“I learned what’s really valuable in this life cannot be purchased, that’s for sure,” he said. “But I’ve got a good life for a 25-year-old.”

Sidelined by a broken leg following two consecutive UFC losses to Seth Baczynski and Sean Pierson, defeats that followed the tragic April 2012 death of his twin brother Logan – a U.S. Marine who served in Iraq - in an automobile accident, Benoist had plenty of time to think about life and his career, especially when the injury took longer to heal than he expected.

“I was on crutches for damn near six months, and the pain that I had, I couldn’t even throw a kick without feeling a shooting pain in my leg,” he said. “So I knew if I can’t kick anything, much less walk around on it properly, there’s no way I’m going to be fighting.”

Soon, as the months dragged on, he wondered if he would ever fight again.

“Everyone goes through that phase when you question things, and this is my only job, so it’s tough,” he admits. “I really had to manage my funds and thankfully I won a bonus in my first fight (A win over Matthew Riddle in September of 2011. “It was really stressful and for a while I couldn’t even stand to watch the sport of MMA or the UFC. It brought so much anxiety and stress for me, but that’s all changed now. I’ve started enjoying it again. I got back to it and the things that originally attracted me to this sport, and I’m enjoying it and thus improving.”

Still had his bonus from 2011? Now that’s a mature young man.

“I tried to be smart and I planned ahead.”

And when he was cleared to train again, he did so with his original goals to be the best welterweight in the world still intact, but with a new strategy and team to get him there.

“I had so much going on amidst my injury, just trying to get certain negative things and people and influences out of my life, and as much as fighting is not a team sport, it certainly is and I just got better members on my team altogether and it’s amazing,” said Benoist. “If you’re not in control of things going on upstairs, you’re not going to be able to really put that into play on the outside. I have no doubts that this is best version of myself yet and I look forward to bringing that to the Octagon.”

Looking to add a third straight defeat to Benoist’s 6-2 record is veteran banger Bobby Voelker, a former Strikeforce standout in need of a win himself after three consecutive losses.

“Bobby’s an experienced vet, there’s no doubt about it, and he’s as tough as they come,” Said Benoist. “But there’s more to this game than just being tough. There’s no secret how Bobby’s probably gonna fight me, and I’ve prepared for that. So you don’t go in there trying to match Bobby’s toughness; you’ve got to be smart in this game, and I just think that all around I have more tools to win the fight.”

If his head’s on straight, he’s probably right. Despite his lack of pro experience, Benoist went into double digits on the amateur circuit, and when he’s on, he’s got all the tools to one day soar to the top of the welterweight ranks. Of course, nearly two years off can hurt a fighter, but at 25, he’s got plenty of time to catch up, and this time, it’s without the emotional baggage he carried into his fights with Baczynski and Pierson. In other words, he’s been able to put the losses – in and out of the Octagon – of 2012 in the rearview mirror.

“It’s like being reborn in a sense,” he said. “It took me a long time to figure things out and refocus. Naturally I had to have a moment there to really get my feet under me and I was doing anything I could to try and feel good about something and bring some positivity to my life. And taking fights on short notice and taking fights when I probably shouldn’t have even been fighting wasn’t the right move. But I’ve had time to sit back and reflect on these things and I’ve had more time to spend around the proper people and learn how to properly train. This whole sport and training for a fight does not come with some sort of manual that tells you the right things to do, but with a little bit of age comes wisdom and knowledge, and I’ve certainly gained better knowledge of how to properly train for a fight and the things I need to do, and I’m just all around in a better place and a positive position to do it.”

Now it’s time to remind the world just how good he can be.

“They probably forgot about me, but I look forward to making them all remember,” he said. “I totally believe in my ability and I know I have a lot of untapped talent that I’ve not got to show the UFC or the world yet, for that matter. I’m only 25 years old and I’m getting better all the time, so anybody that doubts me or is trying to go off my last two fights, that was not me and it’s going to be a different story this time.”