Lamas Is Sanchez's Worst Nightmare in Monterrey, Wins by UD 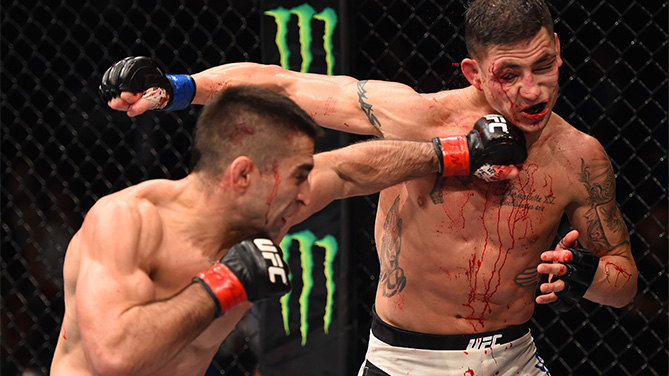 Diego Sanchez’ fourth weight class may ultimately be a good place for him, but not on Saturday night at Arena Monterrey in Monterrey, Mexico, as Ricardo Lamas spoiled the featherweight debut of “The Dream” and put on a disciplined and impressive performance en route to a shutout three-round unanimous decision win in their UFC Fight Night co-main event.

The judges saw the bout 30-27 across the board.

Lamas’ stick and move strategy worked well for him as the bout opened, with Sanchez stalking but not landing anything of note. Midway through the round, Sanchez flurried and got Lamas’ attention, but it was “The Bully” who returned fire with a wheel kick that rattled the Ultimate Fighter season one winner. With less than two minutes left, Lamas scored his first takedown of the bout, and though Sanchez bounced back up, the Chicago product kept him locked up until he could get another takedown.

After falling short on a takedown attempt to kick off round two, Lamas kicked Sanchez just above the ankle and hurt him. Some follow-up strikes scored on the bloodied Sanchez as well before Lamas went for another takedown. Lamas would get the bout to the mat, but Sanchez’s ground work was effective in staying out of trouble, allowing him to get back to his feet with under a minute left.

In the second minute of the final round, that kick to the lower part of Sanchez’ leg landed flush again, forcing Sanchez to limp back to the fence, where he waved Lamas in. Lamas agreed, but instead of brawling, he locked his foe up and then fired off a spinning backfist that reopened Sanchez’ cut over his right eye. And while Sanchez continued to press forward, he never came close to getting Lamas in trouble. 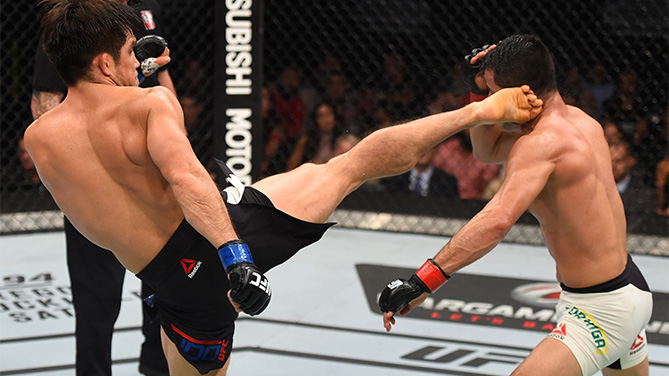 Unbeaten Henry Cejudo may have secured himself a shot at Demetrious Johnson’s UFC flyweight title in 2016, but the 2008 Olympic Gold medalist didn’t put on the dominant and spectacular effort many hoped to see by beating Jussier Formiga via split decision.

A competitive first round was edged by Phoenix’ Cejudo, thanks to a busy striking attack and a well-timed takedown with seconds left in the frame. Natal’s Formiga closed the gap a bit with his counters in the second frame, but it was still Cejudo leading and controlling the fight.

There was little sense of urgency from either man in the final round, just more of the same, with the exception of a slam from Cejudo in the third minute that was the only notable highlight of the stanza before the final horn sounded.

With the win, the number five-ranked Cejudo ups his record to 10-0; the number three-ranked Formiga falls to 18-4. 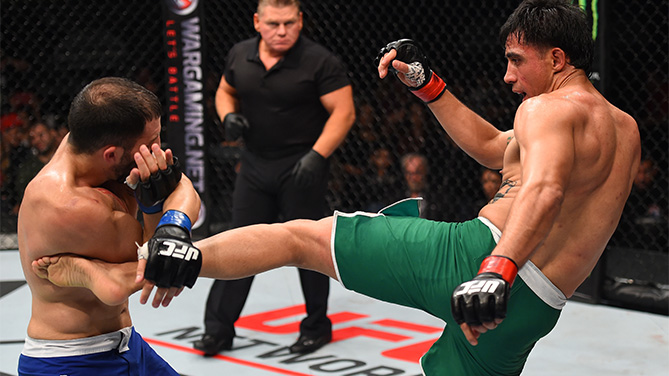 Mexico’s Erick Montano dug deep in the third round of his Ultimate Fighter Latin America 2 welterweight final against Spain’s Enrique Marin, winning the third and final round to take the season title and join his brother Augusto on the UFC roster.

There was some good back-and-forth striking exchanges in the early stages of the opening round, the smoother Marin holding a slight edge. With under two minutes left, Montano scored a takedown, only to have Marin reverse position and then get back to his feet, where the two continued to trade the advantage back and forth.

Marin didn’t take long to get the takedown to start round two, and the combatants switched positions before Marin resettled on top for a spell. With under three minutes to go, the fighters stood, Montano looking winded but still throwing. Marin became more measured in his pace, possibly allowing the Mexico City native to make a case for winning the round.

The pace slowed even more in the final round, but Montano remained busy with his strikes and even with a late takedown, wrapping up the round and the fight. 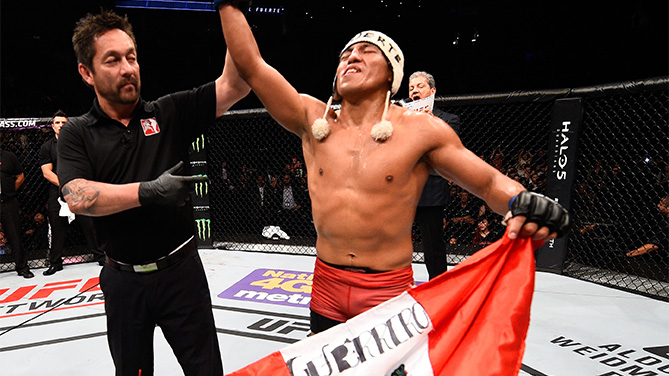 Enrique Barzola became the first fighter from Peru to win The Ultimate Fighter Latin America, as he upset highly-touted Horacio Gutierrez via unanimous decision to take the series’ lightweight crown.

After eating a few kicks to the leg as he found his range, Barzola got close midway through the opening round and put Gutierrez on the mat twice. With a minute left, Gutierrez swept his way out of trouble and got back to his feet, only to be taken down a third time moments later, and that’s where he stayed until the round’s end.

The second and third rounds were all Barzola, as he took Gutierrez down and fired off strikes for the remained of the frame, cutting the Mexican in the process. 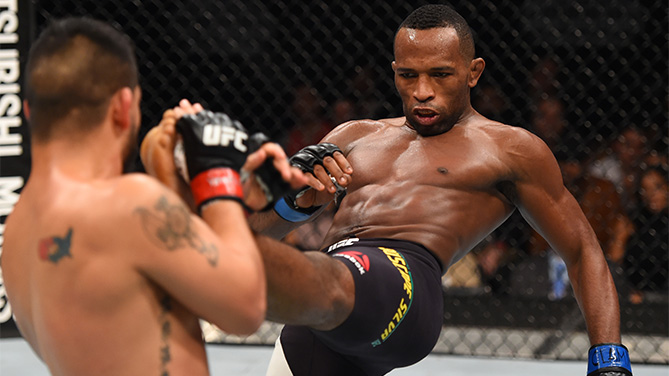 Brazilian lightweight Leandro Silva kept his hot streak going in the main card opener, moving to 3-0 with 1 NC in his last four with a close, but unanimous, decision win over Efrain Escudero.

Both Escudero and Silva showed a healthy respect for each other in the opening round, Escudero pressing but not letting his hands go. Grappling for both was a stalemate, but late in the round, Silva appeared to be getting in a rhythm with his striking.

Escudero switched things up with a takedown early in the second round, and even though Silva got right back up, the former Ultimate Fighter winner grounded the Brazilian again seconds later and started to take control of the match.

Rebuffing three takedown attempts by Escudero in the final frame, Silva fired off some effective strikes and then took the Mexico native’s back after the third attempt with under two minutes left. Escudero avoided a submission, but clearly lost the round and, ultimately, the fight.