Ricardo Lamas was a little over a month into training camp when he got the call saying that the man he was preparing to face – former featherweight champion Jose Aldo – had been removed from the matchup and shuffled in to a new vacancy opposite current titleholder Max Holloway at UFC 218.

Unfortunately, it’s a situation “The Bully” has been forced to deal with in the past.

Four years ago, the Chicago veteran was gearing up for a showdown with Chan Sung Jung, but when Anthony Pettis was forced out of his championship bout with Aldo, the UFC selected “The Korean Zombie” to replace him, leaving Lamas without a dance partner before he was eventually pulled from the card.

“I’ve been here before and it sucks every time,” said Lamas, venting about the familiar late change in plans that impacted his preparations for this weekend’s UFC on FOX event in Winnipeg, Manitoba, Canada.

If there is one silver lining to this second occurrence of losing an opponent to a title fight it’s that the 35-year-old contender will still step into the Octagon on Saturday evening at the Bell MTS Centre after Team Alpha Male representative Josh Emmett jumped at the chance to share the cage with the third-ranked fighter in the 145-pound weight division.

While the unexpected shift in opponents was a curveball in the middle of training camp, Lamas didn’t allow losing Aldo and the uncertain times before Emmett was announced as his replacement to shake his focus and commitment in the gym; he was going to be ready to fight on December 16, no matter what.

“I never lost focus,” said Lamas. “I was training hard the whole time as if I had an opponent, so there was no shift. I just kept doing what I was doing.”

In a way, the approach he applied to preparing for this fight carries over to the way the perennial contender has approached his career as a whole over the last couple years.

After coming up short in his bid to claim the featherweight title at UFC 169, Lamas has spent nearly four years stationed in the Top 5, but was still on the outside looking in when it comes to the title picture as he struggled to put together enough wins to secure a second kick at the championship can.

The problem is that when you’re already one of the top contenders in the division, there are only a finite number of matchups that can bring you closer to earning a title opportunity, leaving Lamas in the unenviable position of having to take high risk, low reward bouts against the likes of Charles Oliveira and Jason Knight. 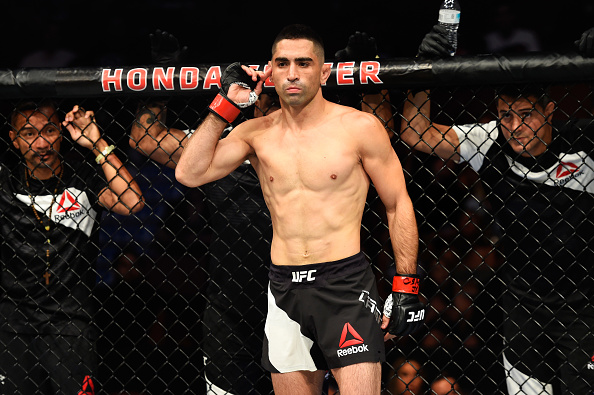 To his credit, the Elmhurst College grad has affirmed his elite status over his last two outings, earning stoppage victories over both Oliveira and Knight to once again put him on the fringes of title consideration, which is why losing the chance to face Aldo this weekend was such a tough pill to swallow.

“The position that I’m in, there are only a couple of fights that will move me up or give me an immediate title shot,” said Lamas, who has shared the cage with the absolute best of the featherweight division during his 12-fight run in the UFC. “If those guys are already booked up or they’re not fighting yet, I’m kind of stuck and I’m forced to take these risky fights that don’t have a big payoff with a victory.

“The past couple years have been kind of up and down – win one, lose one, win one, lose one – and it took me a little to get back on a winning streak and put a couple wins together,” he added. “But I managed to do that and I’m looking to turn two into three on Saturday.”

It has been a challenging couple of months for Lamas, but with the holidays on the horizon and a new baby coming to turn his family of three into a family of four in the not too distant future, the hard-nosed veteran is ready to funnel the frustrations that fuel his training camp into his performance this weekend in Winnipeg.

“Emmett is going out there with nothing to lose,” he said of Saturday’s matchup. “He’s in a good position right now – a loss isn’t going to move him any further down from where he’s at, so he can only really gain from this fight. That’s how I thought about it this camp and I used that to push myself in the gym and train my ass off.

“I’ve got to go out there and put on the same performance that I put on my last fight; there is no other choice for me,” he added. “I’ve put in the time, I did all the work and all I’ve got to do is go out there and perform the way I know I can and I will leave victorious for sure."