Lamas Begins the Road to Revenge 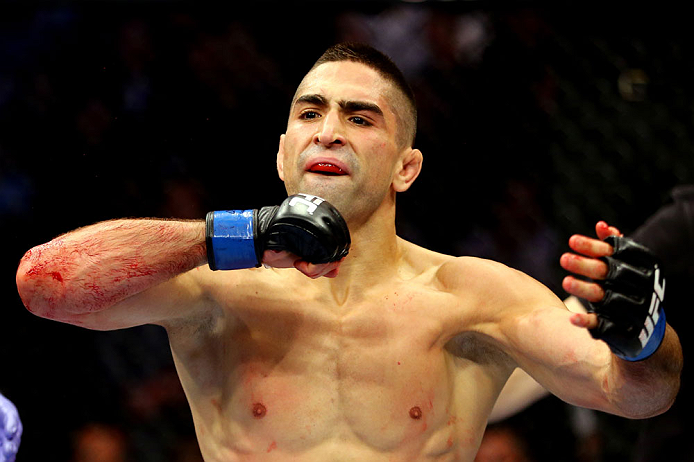 Ricardo Lamas hasn’t taped photos of Jose Aldo to his refrigerator and mirror yet, but he hasn’t forgotten the UFC featherweight champion either as he begins the road back to a shot at the man who handed him a five-round unanimous decision defeat at UFC 169 in February.

“I think every loss sticks with you for a while,” said Lamas, who faces Aldo’s teammate Hacran Dias this Saturday in San Antonio. “I’ve had losses from years ago that I still think about and I think those things just stay with you. They’re always in the back of your mind and I don’t think you ever get over it. It’s just one of those things.”

It can almost make a Chicago native drown his sorrows in deep dish pizza. Lamas laughs.

“I’m not the type of person that’s going to sit around and feel sorry for myself,” he said. “I’m going to make the change to make myself better. I’m going to remember those losses forever, but I’m not going to let them drag me down.”

Some defeats do hang around longer than others. Knockout losses to Danny Castillo and Iuri Alcantara can be explained away by simply admitting that you got caught. The Aldo fight though, that was not just a title fight, but one Lamas feels was winnable.

“I feel like I beat myself in the Aldo fight,” he said. “I don’t feel like Jose Aldo beat me. I was too tentative, being too cautious and too careful, and it cost me the fight. I just didn’t fight like myself. That’s the biggest thing I took away from it and that’s something that isn’t going to happen again.”

In other words, “The Bully” will be back this weekend in Texas, and who better for him to fight and make a statement against than someone who trains with Aldo in Nova Uniao’s Dias, a seasoned vet who has won nine of his last ten.

“I think this is a good start on my road to revenge, fighting one of his teammates,” said Lamas. “I’m not looking at it just that; I have a lot of respect for Hacran. I know he’s a tough fighter and he has a win over a guy that beat me in the past (Alcantara), so I know he’s no slouch. I’m coming ready and I’m going to get back to the path of victory.”

Once back on that path, the 32-year-old Lamas can begin plotting the road to another title shot. In a recent chat with former and future title challenger Chad Mendes, he assumed that after a couple big wins, he was going to be knocking on Aldo’s door again. Instead it took two years. Does Lamas foresee a similarly arduous journey?

“In this sport I’m just going to take it one fight at a time and just concentrate on my performance,” he said. “If I perform to the level where I can do my best at, I know that the UFC will see it and eventually they’ll give me a rematch.”

But what if it isn’t Aldo on the throne when and if he gets back there?

That statement alone should tell you how deep the Aldo defeat cut, because it’s almost as if the title would take a back seat to beating the Brazilian bomber, with or without the belt on the line. And that’s not surprising, given a strong fifth round finish by Lamas that could have turned the tide on the fight had he done it a couple rounds earlier.

“Now that I know what he has, I’ve taken his hardest shots and there wasn’t one time in the fight where he hurt me or where I felt like he was about to finish me or that I was in danger,” he said. “I know what I’d be up against a second time and that’s what I’m gonna be gunning for. I’m going to prove to whoever I need to prove it to that I deserve another shot, and it will take time, but I’m gonna get myself back there.”

That task begins on Saturday, and the soft-spoken Lamas is in a statement-making mood. Not with his mouth, but his fists.

“Especially coming off a loss, you have to prove to the UFC that you’re still worthy, and you have to prove that to the fans,” he said. “The fans in this sport are very harsh sometimes. They can be with you while you’re riding a win streak, then once you get one loss, people will turn on you and say ‘well, maybe he wasn’t that good.’ So this is another opportunity to prove to them that I am that good. This is the fresh start. I’m coming back and getting back in the win column.”