LAMAS vs KNIGHTTop five featherweight contender Ricardo Lamas snapped the four-fight winning streak of Jason Knight in UFC 214 prelim action at Honda Center in Anaheim on Saturday night, halting the Mississippi native in the first round.

A takedown attempt by Lamas in the opening minute nearly resulted in a guillotine choke for Knight, but “The Bully” got loose and got his takedown. Knight was very busy off his back, though, and eventually he got to his feet with 90 seconds left. But as he did, Lamas hurt his with a right hand. A slugfest ensued, with Knight taking huge shots but refusing to go away. But as the fight went back to the canvas, Lamas wouldn’t be denied, and a few unanswered shots brought in referee Mike Beltran to stop the bout at 4:34 of round one.

Aljamain Sterling won the biggest fight of his career, as he scored a three-round unanimous decision over former world champion Renan Barao.

Sterling (14-2) moved well to kick off the bout, with his kicks helping him find his range early. In a scramble to the mat in the second minute, Sterling tried to lock up a leg, but Barao got loose and landed in the top position. Sterling tried to secure a submission from his back, but Barao again eluded trouble while landing a series of ground strikes, allowing him to keep his foe grounded.

The New Yorker got Barao (36-5 with 1 NC) to the mat in the second minute and he immediately took his back. There, Sterling patiently worked, eventually moving to the top position where he landed several hard elbows and knees.

Keeping the pressure on in the final round, Sterling jarred Barao with a front kick to the head and while he wasn’t able to pull off anything that telling again in terms of scoring, he did control the frame until a Barao takedown in the final seconds.

Unbeaten featherweight contenders Brian Ortega and Renato Moicano put on a show for two-plus rounds until Ortega ended the bout in the third via submission to keep his “0” intact.

Moicano and Ortega wasted no time getting acquainted, and they remained in the pocket exchanging strikes for much of the opening frame. Moicano emerged with a bloody nose at the end of the stanza, which may have been the only thing to differentiate the two, as both landed hard shots.

Moicano kept his work rate high and he mixed things up nicely as Ortega slowed down. Ortega scored with a hard right with 90 seconds left, which slowed his foe down briefly, and the body shots the Californian followed with worked well too, prompting Moicano to seek – and get – a takedown late.

The heated action continued in round three, but in ended abruptly when Moicano went for another takedown, because as soon as he did, Ortega showed off his Brazilian Jiu-Jitsu black belt as he locked in a guillotine choke that prompted a tap out at 2:59 of the final frame.

Fili showed his experience early in of the first round, as he easily moved around the Octagon and stayed busy with his strikes, but as the frame progressed, Kattar was able to tag his foe, and late in the round he got him to the mat, where he finished strong with ground strikes.

The Team Alpha Male vet continued to be busy in the second, but Kattar kept landing flush shots that saw the New Englander gaining momentum in a hurry, and in the final minute, he drilled Fili with a straight right hand that wobbled the Californian’s legs.

Fili remained the more active fighter in round three, but ultimately, the heavier blows were landed by Kattar, who marked Fili up and again dominated when the fight went to the mat briefly. 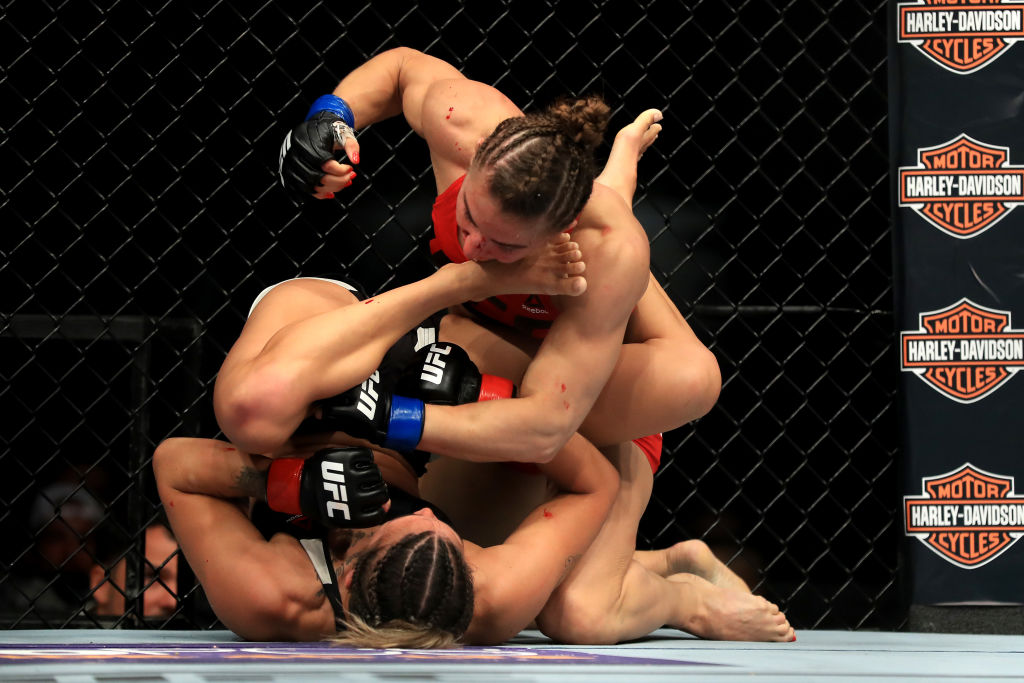 In her first fight since April 2015, Russia’s Alexandra Albu won a hard-fought three-round split decision over Kailin Curran in an exciting strawweight scrap.

Albu landed several hard punches and knees in the early going, yet she surprisingly pulled guard to get Curran to the mat. There, Curran was able to get off some hard shots while Albu looked for a submission that didn’t come. Once standing, Curran was able to bloody her foe and she seemed to be the calmer of the two. But in the final minute, Albu surged into the lead once more with a throw to the mat followed by thudding elbows before the two rose and ended the round in a clinch against the fence.

Albu’s aggressive style continued to pay dividends in the second round, even though Curran took advantage of the Russian’s spotty defense to get in some hard shots that kept her in the fight heading into the final frame.

Looking to make a statement, Curran came out fast for the final round and she again exploited the holes in Albu’s defense. From there, a brawl broke out, with both strawweights trading as they emptied their gas tanks. With three minutes left, Curran got a takedown and kept Albu grounded until the final minute, and while Albu got a takedown late, Curran ended the bout in the top position as the crowd saluted the gritty 115-pounders. 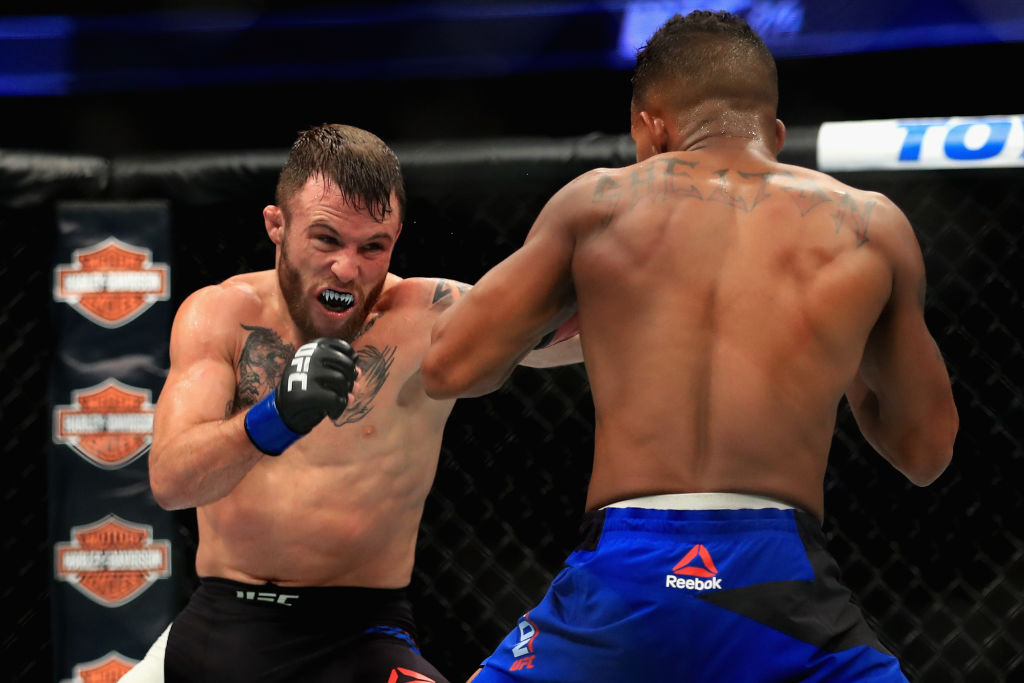 The first round was an interesting one, as Shelton was mainly on the receiving end as Brooks (13-0) sought a takedown, but he landed several hard shots in response as he outworked his foe. A late guillotine choke attempt by Brooks may have been the deciding factor in the frame, though.

The fight continued to be close in the second, with the pair trading takedowns and solid shots on the feet, but a Brooks uppercut that briefly staggered Shelton again could have been the one move that allowed him to take a lead.

Shelton (10-4) made sure he took the advantage in the second minute of the final round, as he scored a flash knockdown of Brooks. But the Iowan didn’t press his advantage, which allowed the newcomer to get his legs back. A flying knee at the end of the round did add to the tally of “Showtime,” but it was Brooks who came away with the win by scores of 29-28 twice and 28-29. 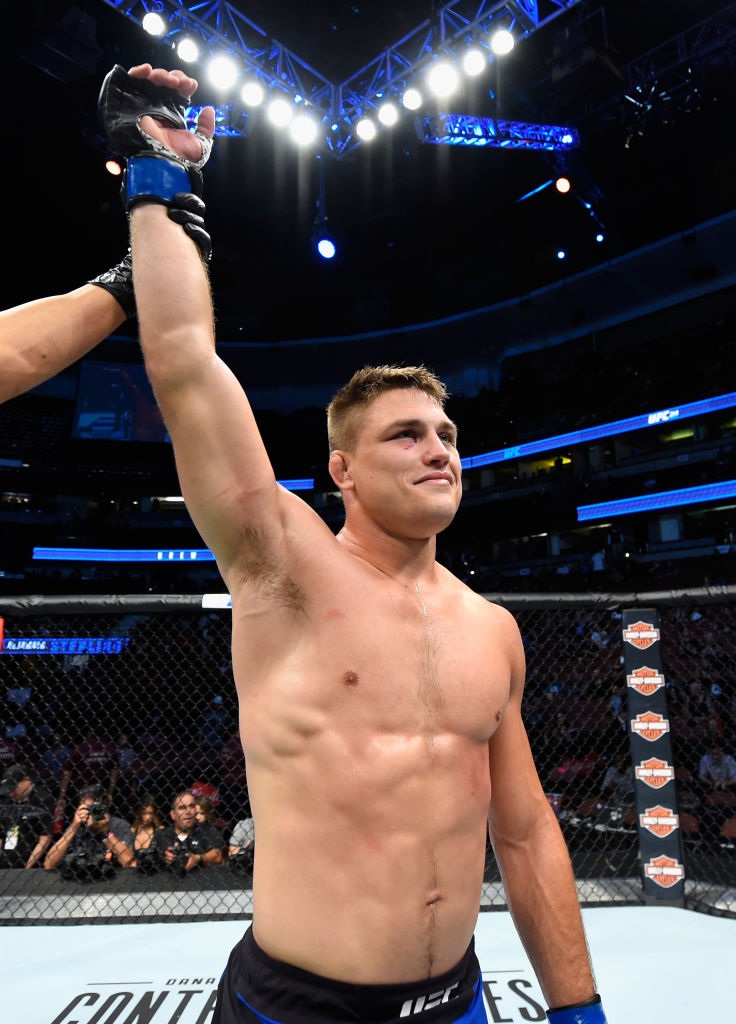 In the lightweight opener, Drew Dober won his clash of veterans against Joshua Burkman, knocking out the Ultimate Fighter season two alum in the first round.

The action was competitive before the end, as both fighters traded hard punches and kicks, but as soon as Dober got a perfect left hand through, it was game over for Burkman, who hit the deck hard. Referee Jason Herzog jumped in immediately, with the end coming at 3:04 of the opening frame.