Lahat looking to keep his winning ways going in Vegas 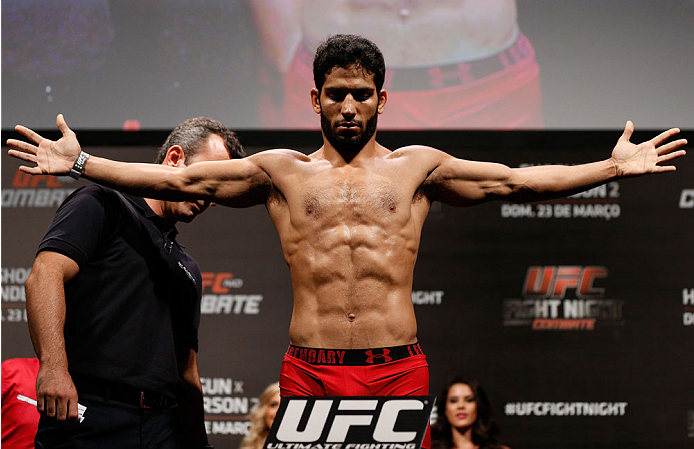 Father knows best. When UFC featherweight Noad Lahat called his dad last May to let him know of the birth of his son Ezra, the new grandpa knew just what to say to his son to mix joy and wisdom in the same sentence.

“He was like, ‘Congratulations. From now on, it’s only going to get harder.’”

Lahat laughs, but it’s true. And those words could also apply to the fighting career of the 31-year-old prospect, whose back-to-back wins over Steven Siler and Niklas Backstrom put him in an important – but positive – position heading into Saturday’s UFC Fight Night bout against Diego Rivas. Win, and it’s three in a row and a good start to 2016. Lose, and…well, that’s not something that enters the mind of “Neo.”

“I hope to fight way more times and finish the fights,” he said of his 2016 forecast. “If you look at my record before, I was finishing the fights. So I want to do that and I just want to keep enjoying it.”

Lahat, 9-1 as a pro, has come a long way since the days when he was fighting in events titled “Dog Fight 4” in his native Israel.

“It wasn’t an easy way,” he laughs. “I just have to say I didn’t pick the name of the event. I think the small shows always try to show how tough they are, but I think the idea behind it was to describe airplane fights.”

How does one explain that to his mother though?

“You just don’t say the name of the show.”

Since those early bouts, Lahat has made a name for himself with a stellar ground game and a fighter’s spirit. The only hiccup so far was a knockout loss to Godofredo Pepey in his UFC debut in 2014, but he’s bounced back impressively since then, beating the veteran Siler and then hot prospect Backstrom. The win over Sweden’s Backstrom was especially important, given the emotions surrounding him fighting in Berlin, Germany. But for the 15 minutes in the Octagon, he was able to simply focus on the task in front of him.

“All the emotions are before and after,” Lahat said. “When I’m in the cage, there’s no emotion. There’s no excitement, everything is calm and the mind is empty. I don’t think about anything but the fight. In Germany, leading to that, it was very emotional walking around, but in the cage, it’s the same cage, the same size and, to me, the same opponent. They’re all the same to me. What’s important is me and how I get ready for that fight. I don’t care about who’s in front of me. I’m ready to go.”

Following the majority decision win, Lahat finally got some down time to enjoy with Ezra, and when asked the biggest change that has come with fatherhood, he says “It’s harder to get eight hours sleep every night.”

Yet other than that, Lahat admits that long spells away from home for training are a thing of the past. He still has obligations with the Israeli Defense Forces until he’s 45, but other than that, life remains as stable as it’s ever been, and if you think he’s been sitting around since last June, think again, as he’s been staying sharp in the AKA gym in San Jose.

“We’ve been working a lot more on technique, and coming from a big gym, that means people are getting ready for their fights every week and every month,” he said. “So someone new is in a fight camp all the time and you better get sharp or you’re gonna get punched in the face.”

That’s not an option on Saturday, as Lahat wants to be the one doing the face punching. As for what’s next, he’s not too picky.