"We’re both different. Everything has changed," she says of first career rematch.
By Damon Martin • May. 14, 2019

Aspen Ladd might be the most promising prospect to join the UFC women’s bantamweight division since Ronda Rousey helped launch the division, but she will never be the one to say it.

Instead, the 24-year-old California native prefers to just let her performances do the talking for her while she continues to climb up the rankings with an undefeated record and a string of broken opponents left in her wake.

Through her first two fights in the UFC, Ladd has picked up back-to-back TKO victories, including a Performance of the Night after finishing former Invicta FC champion Tonya Evinger in her last outing.

She was initially matched up with former women’s bantamweight champion Holly Holm earlier this year, but the fight fell apart before it was ever made official. Now two months later, Ladd is just days away from facing former Ultimate Fighter finalist Sijara Eubanks, who she defeated in their first meeting back in 2017. 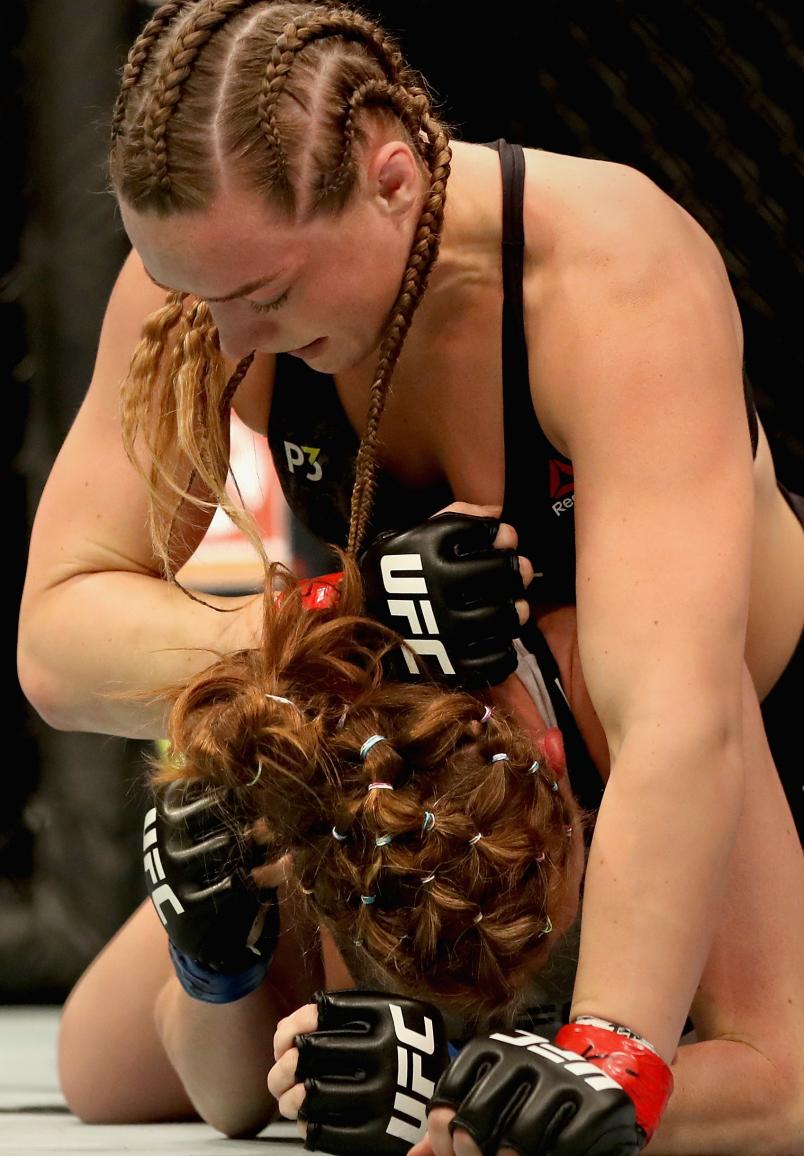 A win over Holm could have earned Ladd a title shot, but she didn’t blink when her opponents changed. In fact, Ladd isn’t even ready to say she’s actually chasing the championship quite yet.

As the old saying goes, Ladd understands that her career is a marathon rather than a sprint, which is why she’s taking the time right now to grow and evolve as a fighter rather than spouting off about what she’s after, much less what she believes is deserved.

“I just want the most opponents, the most fights. I want to build my name, build my experience,” Ladd said ahead of her return at UFC Fight Night in Rochester this weekend.

“My biggest motivation is just building my name and continuing to improve upon what I already have. I’m so new to this. I want to be the best I can possibly be at it. So the motivation is to just keep getting fights and to continue to get better. Continue to build my name and get it out there.”

If Ladd had one complaint about her career right now it would be that she wants to be a very active competitor who fights as often as possible.

She never really takes time off from training, but nothing can replace the kind of valuable experience she gains each and every time she steps inside that Octagon.

“I always train, regardless. It’s my habit, it’s my daily routine,” Ladd explained. “Every fighter in the UFC should be doing that if that’s their 9 to 5 job. So I’m training, but it’s just more of a mental thing when you keep getting fights and they keep falling out.

“You just get that itch to get back in there.”

Now as she prepares for her first rematch, Ladd has found a new kind of motivation to push her even further when getting ready for her upcoming fight.

Two years have passed since she last faced Eubanks, who is the only fighter during her professional fighting career who managed to take her to a decision.

That presents a whole new opportunity in the rematch, as Ladd believes she’s a completely different fighter than the person Eubanks faced back in 2017, and she’s anxious to prove it.

“I’m excited to do it,” Ladd said. “It’s a little weird just because I’ve never had a rematch. I never had a rematch as an amateur and this is my first rematch as a pro. Right before I got the fight, I was talking to my family about how these boxers have these insane trilogies where they keep fighting each other over and over and over. I wonder how that feels? And then I get the call for this one. Now I can find out.

“I feel like it’s a completely different fight. I know I’ve improved very, very much and watching her, I know she’s done the same thing. We’re not the same fighters we were two years ago. It’s a much different fight. We’re both different. Everything has changed.”

The most important part of any fight is getting the win, so Ladd isn’t losing sight of that in her quest to show off the improvements she’s made since facing Eubanks the first time around.

Rather than attempting to show how she reinvented the wheel over the past two years, Ladd prefers to think of her growth as getting better by one-percent each and every day.

A win over Eubanks would put her at 3-0 in the UFC with a slim list of potential opponents ahead of her in the top 10 rankings in the women’s bantamweight division.

Still, Ladd won’t be calling out any big names or saying that she should be fighting for the title even if that’s what everybody else might be thinking.

“The word I use a lot is ‘excitable’. I’m not very excitable as far as things like that go,” Ladd said. “I don’t pay much attention to it. I’m doing my own thing. I’m preparing my own way. I don’t dwell on other people’s thoughts, whether positive or negative; that’s an outside thing. That doesn’t affect what I’m doing now or what I’m trying to achieve.”

Then again, Ladd didn’t shy away from a fight against a former champion when it was offered, so even if her instinct says slow and steady wins the race, she’s never going to back down from a golden opportunity if it’s presented to her.

“We’re all here, we’re all very tough, we’re all good. We’re all signed by the UFC. I’ll fight anybody.”