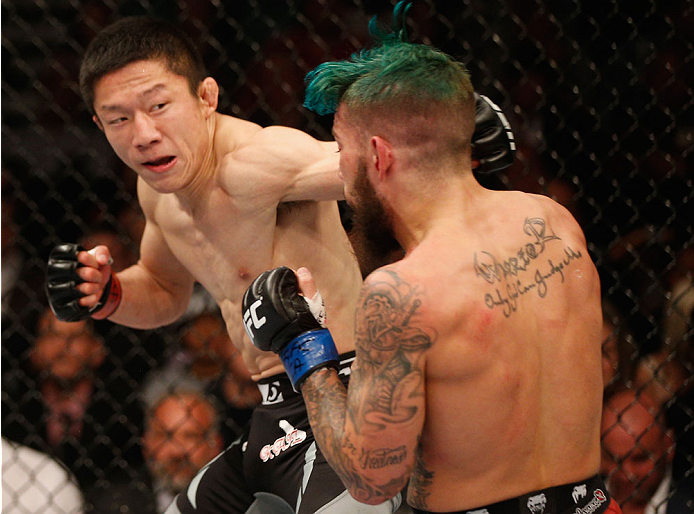 What he hits, he hurts.

A flyweight knockout artist sounds anachronistic until one sees Kyoji Horiguchi in action. He doesn’t jab, he doesn’t paw, he doesn’t slap. Japan’s 125-pound wunderkind attacks in explosions with both fists and feet, which drop and stop those unfortunate enough to receive them.

“I believe the key is throwing the punch from the body and not using the muscle,” Horiguchi said. “As a fighter, I should finish the fight.”

And the 24-year-old Gunma native has finished his fights time and time again, owning nine of his career 15 wins by knockout, including two striking stoppages inside the Octagon. Specifically, eight of those finishes are by punches, but, as mentioned earlier, what Horiguchi hits, Horiguchi hurts. There’s the left round kick to the body that doubled Jon Delos Reyes over in September or the knee to the face from the clinch that sent Darrell Montague to the mat last May.

This devastating power Horiguchi possesses and that he has wielded with authority is a result of recognizing an opportunity and blasting that target with a speedy and precise strike, which are all hallmarks of Horiguchi’s first martial art: karate.

“I started karate when I was five years old,” he said. “Whatever I do in the Octagon is coming from karate, such as technique and foot movement. I would like to validate karate as the most powerful martial art to the fans. I am using my karate technique in MMA ‘as is’ since I believe in my karate.”

What Horiguchi has done in the Octagon is win - win each and every time he’s stepped into it. Currently, Horiguchi is on a four-fight UFC win streak, which is slightly less than half of the overall nine-fight win streak Horiguchi has been enjoying since March 2012. Add to that, Horiguchi’s one and only career loss came at bantamweight in a controversial decision loss to famed Japanese grappler Masakatsu Ueda.

Stellar as a 15-1 pro, Horiguchi has been perfect as a 3-0 UFC flyweight. Horiguchi battered Montague, finished Reyes and, most recently, outclassed The Ultimate Fighter 14’s Louis Gaudinot. At UFC 182, Horiguchi was a sniper attacking Gaudinot at distance, landing more than double the number of significant strikes at range. “Overall, I was satisfied with the fight since I was able to control the fight and manage my pace, but I always expect to finish,” Horiguchi said.

With his impressive list of defeated foes behind and seemingly limitless potential ahead, Horiguchi is gearing up for the biggest and toughest test of his young career as he takes on UFC flyweight champion Demetrious “Mighty Mouse” Johnson in the main event of UFC 186. Some believe this challenge is too much, too soon for Horiguchi, but the challenger is confident and excited for his shot at gold.

“The only thing I could say is, I thank the UFC for giving me this great opportunity,” he said. “Of course, I am ready to face one of the greatest champions in UFC history and get that belt. I cannot afford to lose the fight.”

On April 25 in Montreal, Horiguchi will tangle with the first, only and, now, five-time defending UFC flyweight champion Johnson. In a word, Mighty Mouse is magnificent. Undefeated at 125 pounds, Johnson has been nearly infallible with the UFC belt around his waist, showing off knockout power, submission skills and an unbelievable gas tank. People love to talk about Johnson’s incredible speed inside the Octagon, but what could be Horiguchi’s undoing is the champion’s suffocating clinch game and his relentless takedowns.

“I respect him a lot,” Horiguchi said. “No question, he is the best of the best, a complete MMA fighter who has all which modern MMA requires. I would like to keep the fight in the stand-up game and avoid going to the ground, where he may have an advantage. And I want to show an exciting fight for the fans. I believe it will be a good matchup for fans to watch. We both move fast and look for the finish. Please look at my power and speed in terms of ‘response time’, which is different from DJ’s speed. Do not close your eyes once we get into the Octagon.”

In preparation for this title fight, Horiguchi is busy training alongside his friend, mentor and fellow UFC fighter Norifumi “Kid” Yamamoto. Right out of high school, Horiguchi passed on college to join the one team and gym he had hoped to - Yamamoto’s KRAZY BEE. For the first half of the 2000s, Kid was easily one of the best and most beloved MMA fighters in Japan, with an ever-expanding list of highlight reel finishes. The comparison is obvious, but Horiguchi has the same quick movement and one-shot power that made Yamamoto a feared titan during the height of Japan’s MMA boom.

“Kid Yamamoto is my MMA head coach,” Horiguchi said. “Kid is a very respected coach and great fighter. We work to the top together as teammates. His aggressive attack, fighting spirit and desire to always look for the finish influences me.”

At UFC 186, Horiguchi aims to become Japan’s first UFC champion and the flyweight division’s second as he collides with Mighty Mouse. In the battle for the belt, speed will be a factor, but Horiguchi’s power could be the deciding factor.