"I must win the fight. That's the only thing I think of." - Kyoji Horiguchi 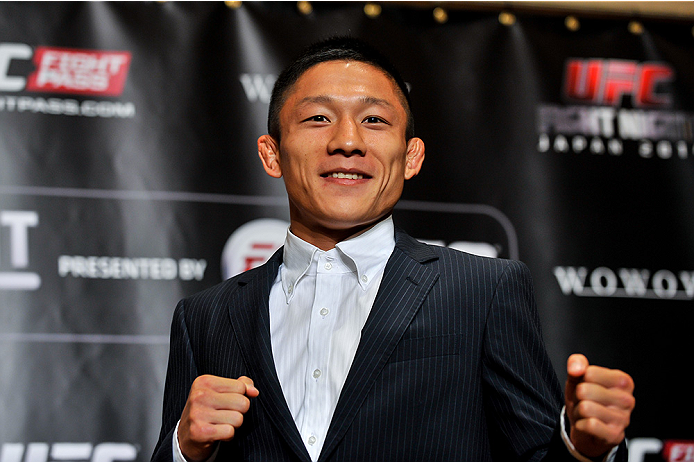 TOKYO, September 19 – The laugh gets you first. It’s real, it’s infectious, and it reminds you that Kyoji Horiguchi is still only 23 years old. That doesn’t make him a kid and it doesn’t mean that only the young can laugh that freely, but it does let you know that despite being in the hurt business, this flyweight from Tokyo is able to enjoy things in a way most wouldn’t be able to.

And that’s what may make him Japan’s next big MMA star.

In a country that has produced so many greats that usually a single name will suffice to identify them - Saku, Sato, Mach, and Kid, just to name four – the ability for the MMA scene to rise again and become a powerhouse of the sport once more relies on having fighters that aren’t just good, but that people want to see.

Horiguchi has that potential, with a mix of power in the Octagon and charisma outside of it making him a prospect who stands out from the rest of the crowd. But being that fighter and being able to handle that role are two different things. Horiguchi, a Gunma native, seems well equipped for the job, answering in English when asked what kind of pressure is on him to perhaps carry the sport for his country in the UFC someday.

Then came the laugh, one of several during a sitdown with him and his manager, Fumihiko Ishii. Horiguchi is comfortable in the spotlight, but don’t let his sense of humor make you think he’s not taking this all seriously. Consider that he has been competing in martial arts since the age of five, first with karate, and then MMA, and once he graduated from high school, he turned down college to move to Tokyo to train with Norifumi “Kid” Yamamoto. That decision didn’t initially sit well with his parents.

“Kid Yamamoto was my hero,” he said. “The first time I mentioned that I wanted to be a professional fighter, my parents were against it. However, after I decided, they became really supportive.”

Seeing their son’s dedication to his craft likely aided in that acceptance, and watching his success had to help as well. Shooto’s Rookie of the Year and MVP in 2010, Horiguchi has had a fairly smooth run in the sport thus far, his only loss coming via majority decision to Masakatsu Ueda in 2012. In October of last year, he arrived in the UFC with a second round TKO of Dustin Pague, and then came what some saw as an odd move, as he jumped down to flyweight in May with a decision win over Darrell Montague.

“Many people suggested it and seemed to be for it, including the UFC,” Horiguchi said of his decision to switch to the flyweight division, and even though he was having a lot of success at 135, a couple more wins at 125 could net him a title shot a lot sooner, and he smiles when asked if that was the plan all along.

“I believe so, and I'm counting on the UFC to make it happen,” he said.

To keep that ball rolling, Horiguchi must make a statement against Jon Delos Reyes at Saitama Super Arena this Saturday. Knowing that keeps him grounded and focused, even with the reality that he will be fighting in the same place so many of his heroes have fought in.

“Of course I'm very honored to fight in Saitama Super Arena, which was home for PRIDE,” he said. “However, I'm not paying attention to this because I must win the fight. That's the only thing I think of.”

With that, the smile faded and the laughs stopped, reminding you that at his core, Horiguchi is still a fighter, and that there’s still plenty of work to be done.