"I like to fight tough guys and I’d love to fight the big fights, but if they give me a fight, I’ll take it. I’ve never said no to a fight and I’ve never turned a fight down.” 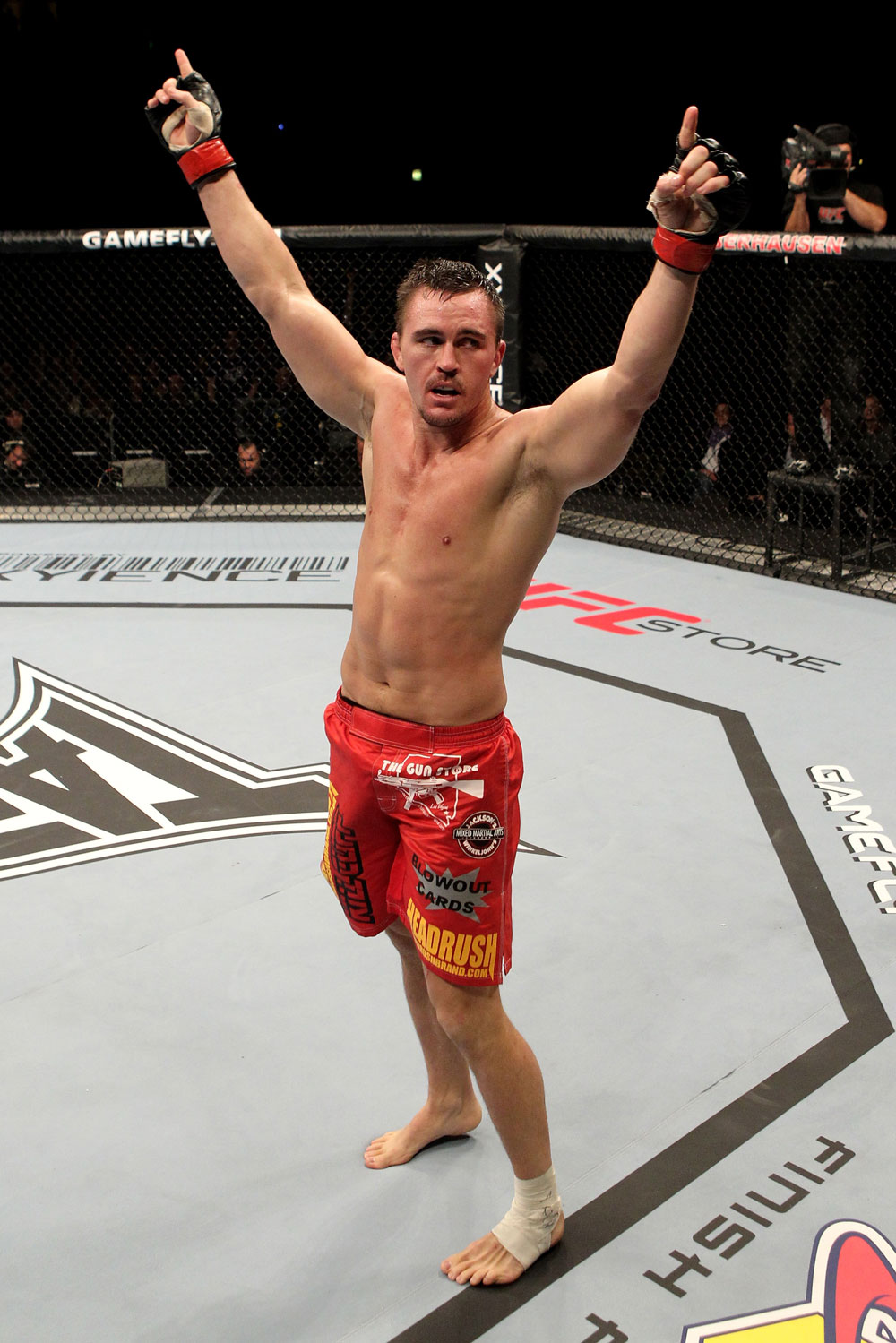 In Australia, the return of Dubbo native Kyle Noke this weekend for UFC 127 is a big deal. You can assume that it’s equally, if not more as, important to the fighter himself, but you won’t hear that from his mouth.

“It’s just business as usual,” said Noke, who faces his Ultimate Fighter season 11 castmate Chris Camozzi. “I’m not trying to make this fight anything more than just a fight and I’m not putting any extra pressure on myself. A lot of people talk about the hype of it all, but I try not to buy into it. I’ve been fighting for a while now and over time I’ve learned to make each fight just a fight. I don’t try to hype it up too much or hype it at all – I just consider every fight to be another step in my career.”

Noke calls it his tunnel vision, the ability to shut out all outside distractions and whatever happened in the past in order to just deal with the task at hand, which in this case is his bout with Camozzi. You can even ask him about his last fight on home shores, a first round submission win over Yohan Gouaida in 2008, and he chuckles because it’s already out of his life and his memory banks.

So where did such single-minded determination emanate from?

“I’ve been fighting for a while, I guess it’s something I’ve developed myself,” said the eight year vet. “No one really told me that’s what I should do, but it’s just something I’ve been doing that works well for me and it helps keep me focused.”

It also keeps him winning. After a solid run through the middleweight ranks in Australia and a 1-1 stint in the now defunct Elite XC organization, Noke began to hit his stride in 2008, and in 2009 he got his shot to elevate his public profile and his game through The Ultimate Fighter 11. He won his first two bouts on the show, but in the quarterfinals he was decisioned by eventual finalist Kris McCray.

“I feel like on the show I really didn’t get a chance to show everyone who I was as a fighter, just being out of my element of not being in my home camp, it wasn’t really me and it wasn’t the way I fight,” he said. “I think a lot of people judged me from my fights on the show and they think I’ve got no wrestling because Kris McCray took me down a lot, but I’ve worked on these things for a long time now and if people judge me from the show, that’s good because they’ll think I’m a one-dimensional fighter.”

Noke quickly dispelled such notions in his two post-TUF bouts, as he scored impressive finishes of Josh Bryant (TKO2) and Rob Kimmons (Wsub2). If anything, the 30-year old vet showed himself to be far advanced from the fighter he was on the show, and frankly, he already looks to be ready for the bigger names at 185 pounds. He says being in his adopted home of Albuquerque with Greg Jackson’s MMA squad is a big reason why.

“To come from that show and get back to my home camp was a wake-up call,” he said. “It was a chance for me to show how good I really am. Just being comfortable with my camp again gave me an opportunity to really prove myself. I grew up playing rugby and I love a team sport, and it really feels like a team and a family being at Jackson’s and I like that aspect of it. I know it’s an individual sport, and at other gyms it feels like it really is, but at Jackson’s it feels like a team sport and it feels like a family. Everyone supports each other there and it’s great because it helps us all grow and develop together. I don’t think I’d be anywhere near where I am now if it wasn’t for all the guys I train with and being at Jackson’s.”

And being out of a house with a bunch of other fighters competing for the same prize over the course of six weeks doesn’t hurt either.

“Nothing can help you living in a house with guys you have to fight and a bunch of crazy guys wanting to fight each other,” said Noke of the TUF experience. “Nothing can prepare you for that. But come fight time, having a little bit of (previous) experience helps.”

Can’t be any crazier than working for security for his friend, the late “Crocodile Hunter”, Steve Irwin, right?

“That was a different type of craziness,” he laughs. “I enjoyed the house and I’d do it in a heartbeat if (UFC President) Dana (White) said they were doing it again and they want me to do it again. It’s a great show and I loved being in there. It was fun, but it was crazy.”

Things have calmed down considerably since then for Noke, but only outside the Octagon. In it, the Aussie has the opportunity to make another major statement with a win over the tough and scrappy Camozzi, and if he succeeds, some bigger names will likely be next. Not that he’s thinking about such matters.

“I just wait for the call to fight and I’ll fight anyone they want me to,” he said. “Obviously, I like to fight tough guys and I’d love to fight the big fights, but if they give me a fight, I’ll take it. I’ve never said no to a fight and I’ve never turned a fight down.”

He’ll get a fight this weekend. But it doesn’t matter whether it’s in Sydney, Albuquerque, or in a Vegas gym filled with less than 50 people, it’s still just another day at the office for Kyle Noke.

“I know it’s gonna be loud,” he said of the atmosphere in the Acer Arena. “But I don’t really hear the crowd until after the fight, when my tunnel vision goes and I realize that I was fighting in front of people. Hopefully I can keep that tunnel vision for this fight.”