Kyle Noke - Ready to Take Care of Business in Toronto

"I've been working hard on all aspects, especially my fitness because he's got a really good gas tank and I want to be able to fight
non-stop for the full 15 minutes as hard as I can." - Kyle Noke 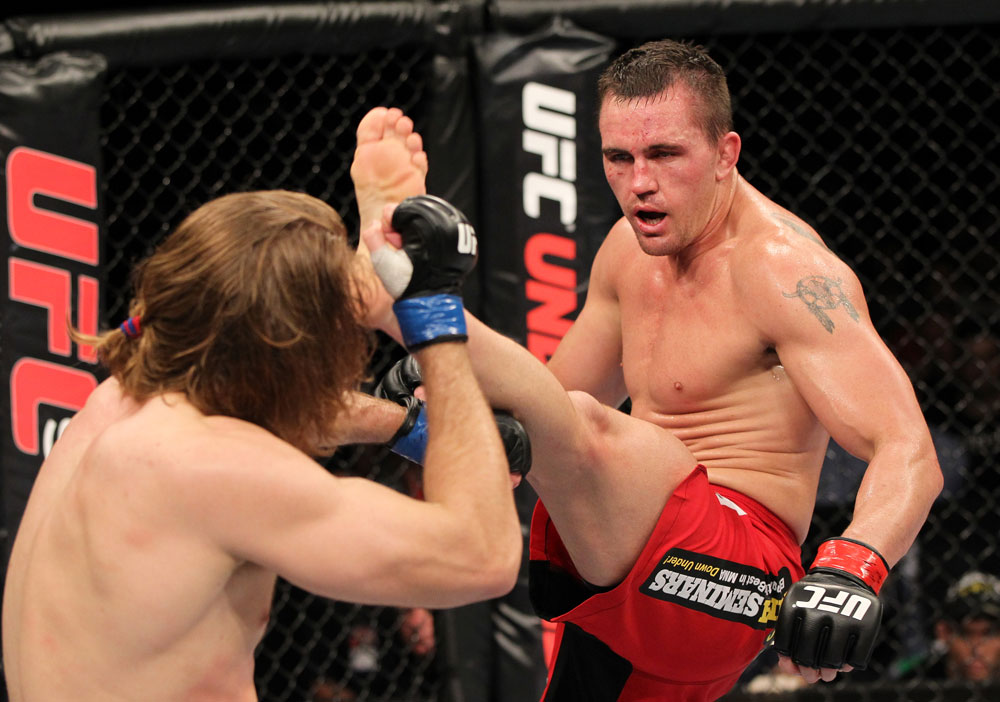 Kyle Noke knew there was a problem with his knee in the lead up to his March fight against Andrew Craig, but as fighters often do with injuries, he kept it secret.

"It was actually sore a couple of weeks leading up to the fight and I didn't want to turn the fight down back home in Australia so I just dealt with it and pushed it to the back of my mind and I thought it'd be ok; I thought it'd be sore but nothing would happen."

But when the fight happened, it was clear that something went wrong.  After dominating early, the Australian appeared listless.

"In the first round I had his back and I went for a submission - a rear naked choke - and when I put my hooks in and squeezed I felt my knee pop out of place, so I damaged it."

Craig came on strong in the second and third rounds to claim a unanimous decision victory. But Noke is not the type to discredit Craig's victory or dwell on the injury. And he doesn't regret taking the fight.

"No, absolutely (no regrets), we're fighters and that's what we do; every fight we go into there's some little injury, something niggling and during the fight once the injury happens you're already in the fight there's no point in quitting just because you've got a sore knee."

It was the second loss in a row for Noke, after an August 2011 loss to Ed Herman that ended a five fight win streak.  Noke is now set to fight Charlie Brenneman at UFC 152 on September 22. Brenneman, 4-3 in the UFC, poses interesting challenges for the Dubbo, Australia born fighter.

"I've seen all his (Brenneman's) fights in the UFC so far.  He's a very tenacious fighter, I think he's going to try and take me down and put me on my back all day long and he's got the gas tank to do it too.  I think he's a tremendous fighter, a tremendous wrestler and it should be a good fight."
Noke, 32, has factored Brenneman's wrestling background and cardio into his preparation.

"I've been working on everything. I'm picking my wrestling up, I've been working really hard with Izzy (Israel Martinez), our wrestling coach, but I've been working hard on all aspects, especially my fitness because as I said he's got a really good gas tank and I want to be able to fight non-stop for the full 15 minutes as hard as I can."

This fight marks Noke's debut in the UFC welterweight division after competing as a middleweight.  But 170 pounds is a familiar fighting weight for the Aussie.

"I've been thinking about it (dropping weight classes) for a while.  I wasn't really cutting to make 185 and the reason I went up to 185 in the first place is cause I was fighting at 170 in Australia and ran out of opponents to fight so went up to 185 and just got comfortable at this weight," said Noke.

"Even before the last two fights I was considering dropping down, then before this fight spoke to coach Greg Jackson about it and he was all on board."

After two tough losses, it would be easy to slip into defeatist thinking.  Noke, however, maintains his all-important confidence.  His team at Jackson's MMA plays a role in keeping him upbeat.

"It is a positive vibe (at Jackson's MMA). I train with all these great guys in the gym and I'm able to hold my own, which gives me a lot of confidence.    I think you have to be confident in the fight game - if you get negative about stuff then it's not good for your career."

There's not much ritual when Noke returns to the Albuquerque gym after a tough loss, just a return to the grind.

"Everything's great (after a loss).  We don't really say anything to each other, it's just back to the grind, back to training. The coaches will say ‘let's work on this where you lost this fight’ or ‘let's work on that’ but generally as soon as you walk in the gym everyone's like ‘you had a great fight, sorry about this or that,’ and then it's straight back to business."

And taking care of business in Toronto on the 22nd is Noke's sole focus.  He's in a high pressure situation - three straight losses can jeopardize a fighter's spot in the UFC.  But for Noke, those thoughts are just a distraction.