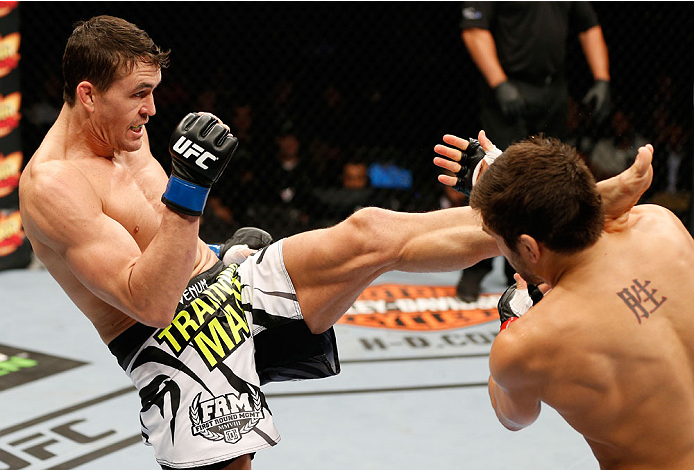 The frustration Kyle Noke has experienced over the last few years is evident in his voice as we discuss his return to the Octagon.

It’s not that he’s combative or uncooperative – he’s articulate and thoughtful with his answers, as always – it’s just that everything is a little sharper; like he’s gritting his teeth as he counts down the day until he can finally cross the threshold into the UFC cage again.

He hasn’t fought since last year’s TUF: Nations Finale in Quebec City against Patrick Cote, where he suffered a unanimous decision loss and shattered his knuckle in the opening round. It was the first time he’d competed since knocking out Charlie Brenneman at UFC 152, a combination of injuries and coaching Team Australia opposite Cote and Team Canada having kept him out of action for the duration of 2013.

“It’s been torturous,” Noke says of the last two-plus years. “Between fighting once last year and not fighting at all in 2013, it’s been bad on me. But I’m lucky I’ve got friends like Cowboy that say, ‘I know you’re struggling; come out and stay at the ranch and we’ll trade out there, do everything out there.’ I’ve been very fortunate to have guys like him (by my side).”

“Cowboy” is, of course, UFC lightweight contender Donald Cerrone and “the ranch” is his BMF Ranch. Cerrone has spent years building up his all-in-one getaway that sits about 45 minutes outside of Albuquerque, and while he still makes the trek into the Team Jackson-Winkeljohn facility on Acoma Street on the regular, he’s also got a gym of his own on the ranch and plenty of room for visiting fighters and friends like Noke to stay when they’re preparing for fights.

“I’m living at Cowboy’s ranch now and it’s a different vibe out there,” Noke, who has gone 4-3 in the Octagon since emerging from Season 11 of The Ultimate Fighter, admits. “It’s beneficial for me to be there and be there to help him get ready as well, so it works good for both of us. There are some tough sons of bitches out there working their asses off to get better, so it’s really a great atmosphere and Cowboy is bringing the best guys to help us get ready like (Muay Thai coach) Henry (Smith) and Jafari (Vanier) for wrestling.”

Up until recently, another of the residents at the BMF Ranch was the man Noke will face on Saturday evening, UFC newcomer Jonavin Webb.

“The day he left Cowboy’s ranch is the day Joe Silva called me and said, ‘We can’t find anyone, but I found a guy Jonavin Webb,” Noke, who was originally scheduled to face Andreas Stahl before the Swedish welterweight was forced to withdraw due to an undisclosed injury, recalls. “I said, ‘Cool, I’ll take the fight.’ Jonavin called me and said, ‘I don’t want to be disrespectful, but this is my opportunity.’ We both said let’s get out there and throw down and then afterward go have a beer.

“We were hanging out for a month together, training, but it’s just the way it worked out. There are no hard feelings. We’re both professional athletes, we talked about it and said, ‘Let’s go out there, do our best and make one hell of a fight.’”

“That kind of attitude rubs off on you when you’re staying out at the ranch, I guess.”

While he’s champing at the bit to get back into action and return to fighting regularly in 2015, the 35-year-old veteran says there were definitely moments early in his return to the sidelines where he considered whether the time had come for him to hang up his four-ounce gloves and move on to something else.

“Right when you get into it – you’re laying back, recovering from having surgery or whatever – that thought does cross your mind, but I can’t do anything else,” he offers frankly. “I’m stuck with this. I don’t have an option but to fight. I dropped out of school early. I wasn’t fortunate enough to get an apprenticeship at any job or anything like that – I’ve basically got fighting and that’s it. I think I’m pretty good at it, so I’m going to keep plugging away.”

In a strange way, missing an extended stretch of time prior to his fight with Cote has prepared Noke for this weekend’s return. It gave him a chance to get answers to the questions most fighters have when they’re competing for the first time after a long layoff, allowing him to focus on his preparation and look forward to hearing the partisan Australia crowd erupt as he makes the walk to the Octagon in Adelaide on Saturday.

“Going into the Cote fight, I remember I was thinking, ‘I haven’t fought in a long time – I wonder if I’m going to get ring rust or anything like that,’” Noke, who was out of action for 19 months before stepping into the cage with the Canadian veteran, says. “The second the fight started, I was like, ‘This is where I’m meant to be. This is what I love doing’ and all those concerns went out the window after that.

“(Being out this time), it’s made me hungry again, given me that drive again. After being somewhat high in the sport to come back down to a low has made me realize how bad I want it. I want it more than ever now.

“And it’s always special to go home and fight on home soil; I’m really looking forward to it,” he adds. “There is always something different about that home crowd, wrapping that Australian flag around yourself as you walk out. It’s going to be nuts.”

Hopefully it’s also the end of the Australian veteran’s frustrations.