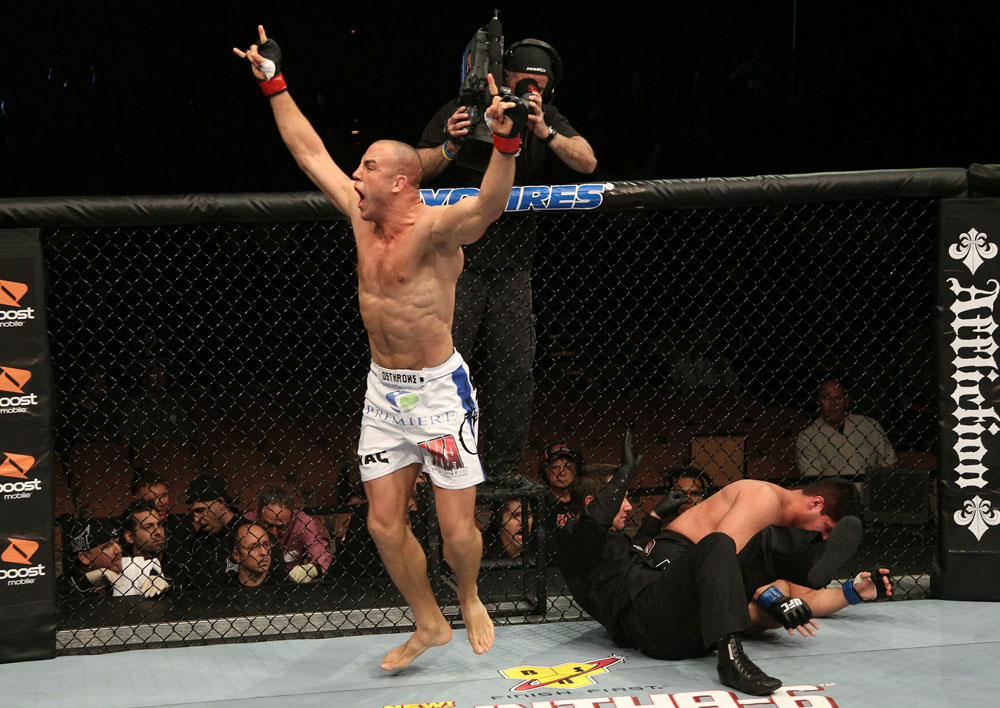 Kyle Kingsbury has some explaining to do. The former Arizona State defensive lineman turned UFC fighter has been a fan favorite ever since his stint on the eighth season of The Ultimate Fighter. The Californian’s mix of a Will Ferrell-like wit and a Randy Couture-like physique has continually kept “KingsBu” entertaining, both in and out of the cage. But, nowadays, there’s a murky mystery surrounding the 29 year old concerning three controversial items of interest and fans the world over are demanding these answers before Kingsbury steps into the Octagon on June 4th.

The first question, what’s with the fanny pack?

“I keep everything in my fanny pack. That's the beauty of it; there is kind of no limit of what you can store in there. I put some things in there for a rainy day, some first aid options like hand sanitizer, band aids, fingernail clippers. Basic items: cell phone, wallet, passport. The one I have now has a key chain holder clip, so there is a nice carabiner I can throw my keys on. Inside I have my coin pocket, which is easily accessible. There are many inner compartments that make everything quite convenient.”

The 10-2, 1 no contest light heavyweight is serious about his fanny packs. Besides choosing hilarious 80’s entrance music like Duran Duran and Kenny Loggins, he is fond of showing off his favorite flamboyant waistline accessory to the UFC faithful at weigh-ins. For his training camp preparing for the Brazilian bomber Fabio Maldonado, Kingsbury has been rocking a “cool pastel pink fanny pack”. But when it comes times to hit the scales for The Ultimate Fighter 13 Finale, Kingsbury says he is taking the fanny pack to a whole new level, “Think Elton John meets Ric Flair as a fanny pack - it sparkles.”

The “Fight of the Night” winner’s recent obsession with fanny packs can be attributed to two wholly different topics, but equally as enigmatic: the wars in the Middle East and UFC middleweight Chris Leben. On a UFC tour of American military bases in the Middle East, Kingsbury was joined with Mike Swick, Ed Herman and the aforementioned Leben, who sported a fanny pack on the trip. Naturally, Kingsbury ragged on the heavy-handed Leben for the unusual fashion choice, but fate would soon strike him back tenfold.

“One of the bases we went to about three days in, we didn't have time to change, so I just got on the mat and rolled in my cargo shorts, which had my wallet, passport and phone in there. Sure enough, I ripped my shorts in half. Now, every base we went to and every country we went to I was holding everything in my hands. I had too much pride to ask Ed Herman to put the stuff in his backpack. I couldn't ask Leben for any real estate in the fanny pack because I had been clowning on him about it the whole time. After a few more days, I thoroughly broke down and realized the convenience of the fanny pack outweighs how bad it looks.”

Now, a humble man in terms of the fanny pack and riding a successful three fight win streak in the UFC, Kingsbury even has ideas for his own custom fanny pack line. “I was watching that Alaskan taxidermy show and I had an idea of having animal heads on your fanny pack,” explains Kingsbury about the possible future of high-end premium fanny packs. “I could wear a ram skull around my waist. The head could screw off and I could store my stuff in there. I could have a different animal head clasped around my junk before each fight.”

As both joking and sincere as he is on this topic, Kingsbury is no fun and games when the cage door shuts. All 6 foot 4 inches and 205 pounds of him came roaring across the Octagon and demolished the previously unbeaten Ricardo Romero at UFC 126. It took only 21 seconds for Kingsbury to land several punishing knees that were followed up by fight ending punches.

The quick TKO victory comes off the heels of the three round war Kingsbury won over Jared Hamman last September. It’s a supremely focused fighter who appears to be getting better with every fight camp. Kingsbury splits his time training with Ryan Bader and CB Dollaway at Power MMA in Arizona as well as the renowned American Kickboxing Academy in San Jose with Cain Velazquez and Jon Fitch. The other person Kingsbury has been training with leads to the next question fans want to know the answer to.

The second question, Why Victor Conte?

Anyone who has followed sports in the past decade knows of Conte and the BALCO scandal. Conte and his former clients like Barry Bonds became the face of performance enhancing drugs in sports. But for Conte and his current list of clients like Kingsbury, that is simply the past. Conte only served four months in a “club fed” prison, but what he did learn was that he can never stray again if he wants to continue to provide for his children. Conte is back to being the cutting-edge nutritionist/trainer, something which he started doing almost 20 years ago.

“I really focus on building myself up as a whole and getting better in every aspect of the game, which includes being a better athlete. Plyometrics, working on my explosiveness, pushing myself cardiovascularly. That doesn't mean going out and pounding the pavement like some 1920's boxer. That means busting my ass with a machine with a mask covering my face hooked up to a $4000 generator pushing out half the oxygen it should be. Things like that are what help me stay ahead of the curve. That's why I got together with Victor because he is always looking for these new technologies to enhance physical performance.”

Whether it is rolling in the gym with BJJ ace Dave Camarillo, wrestling with a TUF winner (Bader), sparring with the UFC heavyweight champion (Velasquez) or running through Conte’s next wave of circuit training, Kingsbury is pushing himself to be the best. Heading into a possible slugfest with Team Nogueira knockout artist Maldonaldo, “KingsBu” has surrounded himself with the winning team to come out on top.

Lastly, the third and the most pertinent question going into this June 4th showdown, is Kyle Kingsbury for real?

At the TUF 13 Finale in Las Vegas, Nevada, Kingsbury squares off with his toughest test to date in Maldonaldo, and he will have the chance to answer his critics not as a guy with a funny tweet, but as a deadly serious rising star in the Octagon.