Regardless Of His Opponent, Kyle Daukaus Looks To Make A Statement In Every Fight, And Plans To Do So This Weekend Against Kevin Holland At UFC Fight Night Santos vs Walker
By McKenzie Pavacich, on Twitter @mpavacich_ • Sep. 30, 2021

Kyle Daukaus feels a little overlooked heading into his fight against Kevin Holland this weekend at UFC Fight Night: Santos vs Walker, but to be honest, he seems pretty okay with it.

“I know the hard work that I’m putting in every single day,” he said, shrugging off the fact that a lot of the conversation pieces coming from “Big Mouth” lately have involved almost every name but his.

As far as the biggest mistake Holland could make inside the Octagon with Daukaus, the answer came almost instinctively: “Taking me lightly.”

“I don’t know if he’s totally looking past me, but a lot of his talking has been about Luke Rockhold and other guys in the division, but it’s going to be a wakeup call for him on October 2nd.”

Standing on the mats at his gym in Philadelphia and preparing to teach a Muay Thai class before heading into a second workout of his own for the day, the middleweight prospect made it clear that he won’t let the time and effort he’s put into the sport be glossed over.

“I know that the hard work is going to pay off, and that it has to pay off. This is all I have; this is all I do — I train 24/7. I’m in the gym twice a day every single day, and I think my record shows for it.”

Holding a 10-2 record with two Cage Fury FC middleweight title defenses under his belt, the portion of Daukaus’ fighting career under the UFC banner has been short but not without challenges or lessons of its own. 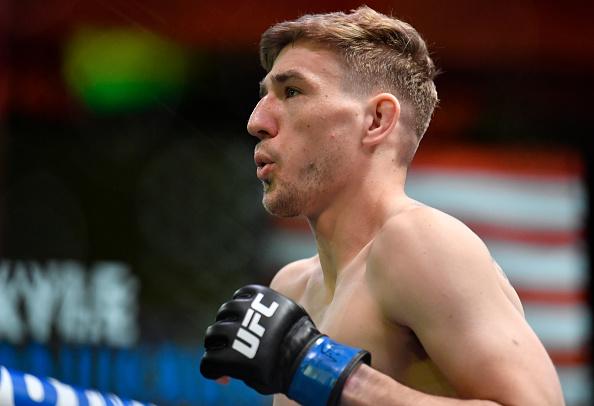 Kyle Daukaus prepares to fight Phil Hawes in a middleweight fight during the UFC Fight Night event at UFC APEX on May 08, 2021 in Las Vegas, Nevada. (Photo by Chris Unger/Zuffa LLC)

Facing the only two losses in his career to Brendan Allen and Phil Hawes inside the Octagon, the 28-year-old said the biggest lessons have come to him in the past year or so.

The execution this time is a little more clear, thanks to Holland's previous two opponents exposing a glaring weakness in his wrestling. But a decision win simply won’t be good enough for Daukaus, who has his eyes on much more.

“It’s important for me to make a statement in every single fight that I have, but especially this one, because he has a number next to his name,” the Philadelphia native said. “I’m coming off of a loss. He’s coming off of two losses, and personally, I’m looking at the fight as if they’re kind of giving him a welcome back party, in a way. It’s definitely not the UFC’s intention, but that’s my mindset going into the fight.” 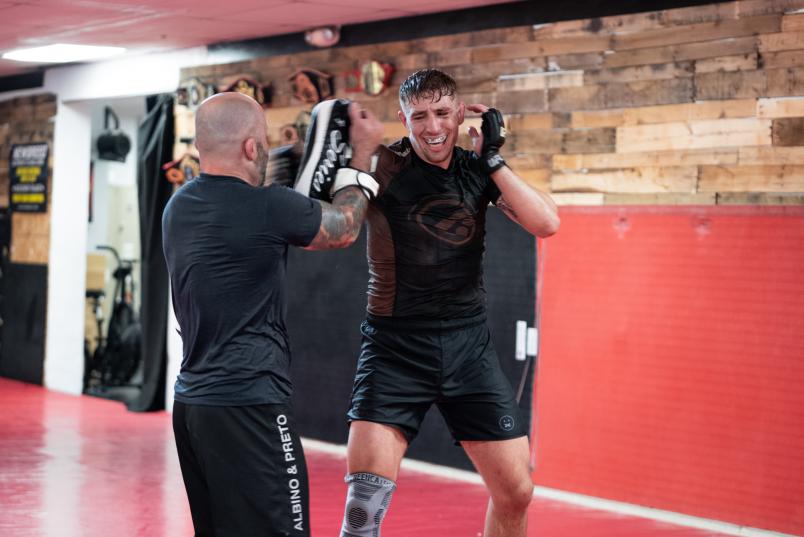 Kyle Daukaus prepares for his middleweight bout against Kevin Holland at UFC Fight Night: Santos vs Walker at Martinez BJJ in Philadelphia, Pennsylvania on September 13, 2021.  (Photo by McKenzie Pavacich/Zuffa LLC)

It makes sense for Holland, whose loss to Derek Brunson in March snapped a five-fight win streak, followed by a second loss in a short-notice bout against Marvin Vettori just three weeks later. But for Daukaus, the opportunity to rise to the challenge of a ranked veteran is as much of a compliment as it is a test.

“I think the UFC knows I’m a good investment, that I’ll be a good investment in the long run,” Daukaus said, adding that he has a new four-fight contract signed and sealed, just waiting to be delivered after he exits the Octagon Saturday. “That just shows that they believe in me and that they think I can compete with anybody in the division, I just have to go out there and execute.”

And while the assumed game plan for many on the outside looking in might be clear, don’t expect this fight to turn into another 15-minute wrestling clinic.

“(His losses) exposed him, but it’s been a while since he last fought, so I’m sure he’s been working on his takedown defense and things like that,” Daukaus said. “This camp is no different than any other camp I've had. My gameplan’s not going to change for anything. I’m not going to go out there and be a striker or anything crazy, I’m just going to try to mix everything together that I can.” 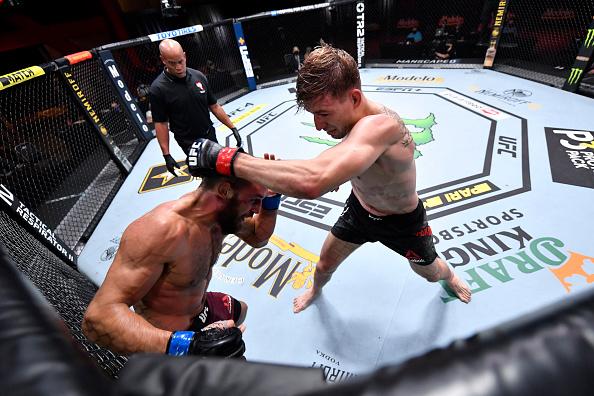 At the end of the day, the road to contention passes through all sorts of challenges, whether it’s bouncing back from a loss or taking on a veteran with a reputation that precedes him in the Octagon; for Daukaus, the key is to focus on what’s directly in front of him.

“He’s a good opponent, he’s a game opponent. He comes to fight every single time,” Daukaus said with a smile starting to spread across his face. “He likes to talk when he’s in there, so I look forward to seeing what he has to say.”