Middleweight Determined To Be A Fighter The Division Needs To Worry About In 2022
By Gavin Porter, on Twitter: @PorterUFCnews • Feb. 17, 2022

At this point, Kyle Daukaus is just trying to fight whoever he can.

The Philly raised middleweight hasn’t had much luck locking down an opponent since his controversial no contest bout with Kevin Holland last year. Injured opponents and COVID-19 cancellations have prevented him from making the walk to the Octagon against Holland for a second time, Roman Dolidze and Julian Marquez.

And while many would be frustrated, Daukaus can’t help but shrug it off and be happy that Jamie Pickett stepped into the fray for UFC Fight Night: Walker vs Hill. To say that he’s ready to fight would be an understatement.

“When I’m in there I’m emotionless. I know I have a task at hand, and I have to run through the person in front of me,” Daukaus told UFC.com. “That’s what I plan on doing.”

Avoiding the “what ifs” has been easy for Daukaus. He’s focused his attention on other things like improving his craft and being there for big brother Chris Daukaus as he’s climbed the UFC heavyweight rankings.

Those distractions helped quench his thirst for competition and have him in the best spot possible heading into this bout with Pickett. Even though Daukaus is a focused guy, he’s quick to admit that he has missed his time in the Octagon.

“I’m excited to get back in. It’s been a while and the last time I was in, there was a little bit of controversy,” Daukaus said. “I’m ready to flush that out and get a good victory.”

A statement victory would set the stage for Daukaus to begin his ascent in the middleweight division, something that the 28-year-old has had his sights set on since joining the UFC in 2020. Although he would gladly welcome another fight with Holland, he’s convinced that there are plenty other opportunities that will present themselves and that he’ll make moves up the rankings without that fight.

“I know there are plenty of other guys in the division that I could fight and beat,” Daukaus said. “I’m not too worried about getting that fight with Kevin back. I’m not fixated on that.” 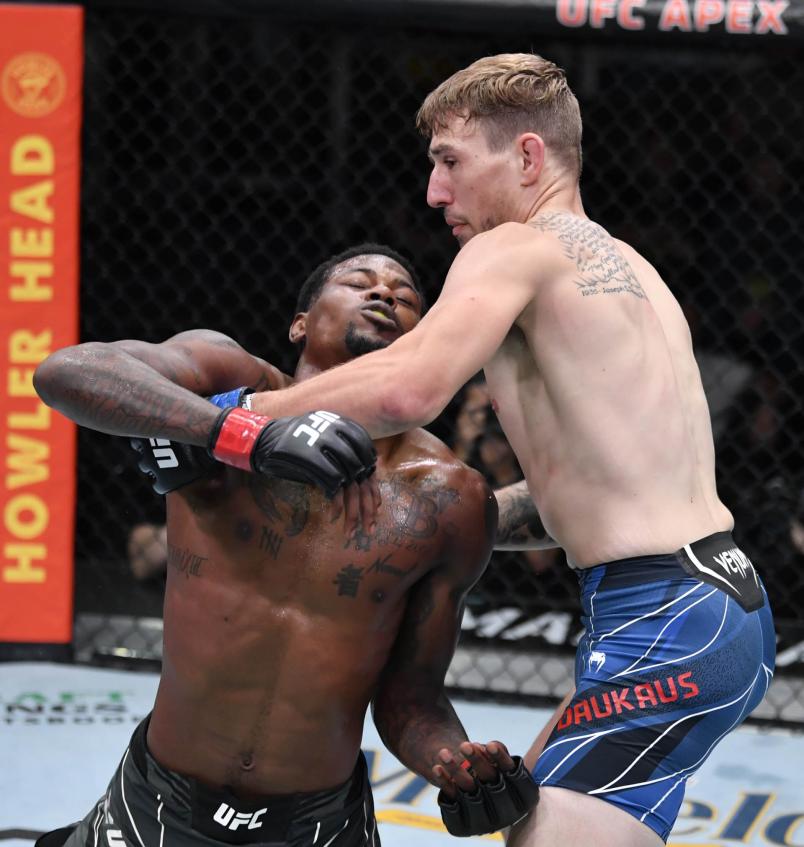 Kevin Holland is knocked down after an accidental headbutt from Kyle Daukaus in their middleweight bout during the UFC Fight Night event at UFC APEX on October 02, 2021 in Las Vegas, Nevada. (Photo by Jeff Bottari/Zuffa LLC)

What Daukaus is fixated on is defeating Pickett inside the UFC APEX on February 19. Even though Pickett’s name came to him on short notice, he is excited to face a game opponent who is more than happy to step up to the challenge.

“He’s a durable guy. I’ve seen a lot of his fights; he was on Dana White’s Contender Series and I was too. He had two fights on DWCS a good finish as well,” Daukaus said. “The fight excites me just because he’s a guy that comes to fight and he’s not really a person who holds back and tries to survive. For the three rounds he’s going to come and bring the fight to me.”

Daukaus believes that Pickett is the perfect opponent for him to put on an eye-opening performance against and put his name more prominently on the map.

“I just want people to start recognizing that I’m somebody that they need to worry about,” Daukaus said. “My goal in 2022 is just to keep winning, and that starts on Saturday.”