Kyle Daukaus Returned To His Roots

Kyle Daukaus has no shortage of motivation heading into his main card assignment opposite Aliaskhab Khizriev Saturday on ABC, as videos and images of the efforts being put in by the competitors he’s chasing in the UFC middleweight division stream across his social media timelines on the regular.

“I see these guys that are at the top level, in the Top 15 and how good they are, how hard they’re working, and it should make you work that much harder,” said the Philadelphia native, who secured his first UFC victory last time out against Dustin Stoltzfus in November. “Back on the regional scene, I didn’t see a lot of things these other guys I was fighting were doing in terms of training, but now, the cameras are on these guys all the time — it’s popping up on all my feeds — so I’m seeing what these guys are doing, and the hard work they’re putting in is making me try to work even harder than they do.”

If watching those he’s chasing — and those attempting to run parallel with him in the climb up the 185-pound ranks — weren’t enough to fuel his efforts in the gym, Daukaus gets an added push from his big brother Chris, an ascendant UFC heavyweight who registered a pair of first-round finishes in the final half of 2020 to establish himself as one to watch heading into this year before stopping Russian veteran Aleksei Oleinik in less than two minutes towards the end of February to push his overall winning streak to four and claim a spot in the heavyweight Top 10.

Like a lot of brother tandems born in close proximity to one another — Chris is 31, Kyle is 28 — there were plenty of childhood battles in the basement of the Daukaus household that forged the competitive bond between the two, with furniture and other household items getting the worst of the damage. 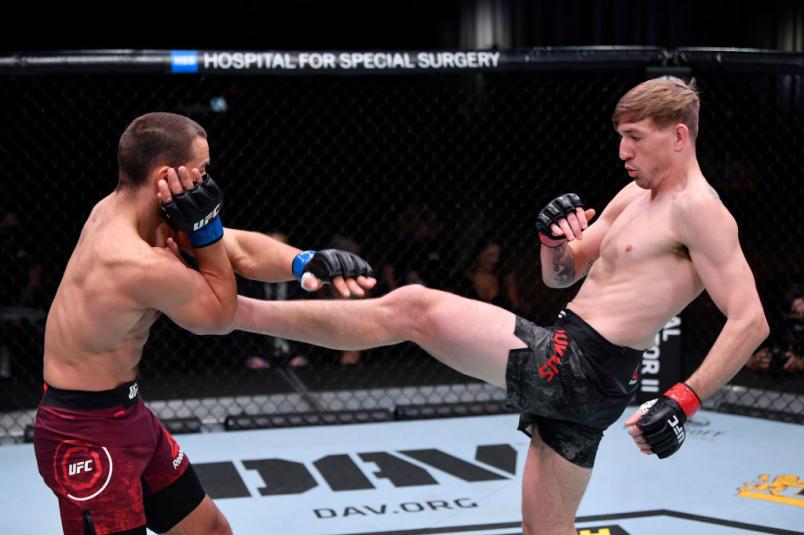 These days, they push each other, the success of one fueling the other. They take turns being the one that prompts the other to get out of bed on those days when hitting the gym is less appealing than usual, and are literally and figuratively in each other’s corner as they embark on this journey together.

“My brother and his friends were bullies when I was younger; my brother used to beat me up all the time, but I got my fair share of licks in as I got older,” offered the younger Daukaus with a laugh. “A lot of mirrors, a lot of tables and chairs and stuff got broken, so it was a little hectic for my mom when we were younger, but it was good.

“Now we get our licks in every weekend — one weekend he beats me up, and the following weekend, I beat him up, so it’s still a good back-and-forth that we have between each other.

“I don’t think there are any words for it,” he said of chasing down his UFC dreams alongside his brother, who is doing the same.

As he tried to continue the thought, Daukaus paused, unable to find the words to accurately sum up what it means to him. 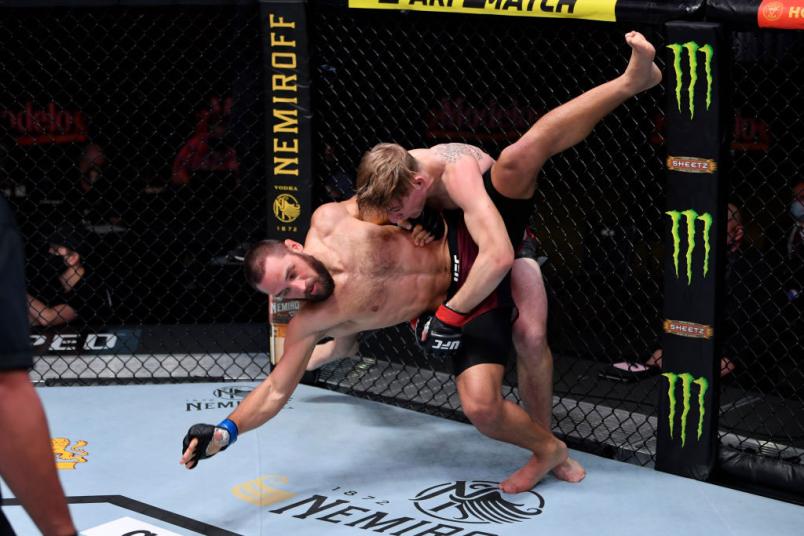 Kyle Daukaus takes down Dustin Stoltzfus in their middleweight bout during the UFC 255 event at UFC APEX on November 21, 2020 in Las Vegas, Nevada. (Photo by Jeff Bottari/Zuffa LLC)

Kyle Daukaus takes down Dustin Stoltzfus in their middleweight bout during the UFC 255 event at UFC APEX on November 21, 2020 in Las Vegas, Nevada. (Photo by Jeff Bottari/Zuffa LLC)

In addition to seeing the efforts put in by the athletes at the top of the middleweight division and having his brother’s success spur him on, the emerging prospect wants to prove he’s the best middleweight to pass through Dana White’s Contender Series, despite the fact that he came away from his win over Michael Lombardo in the second week of the third season without a UFC contract.

Saturday will mark his third straight meeting with a graduate of the show.

“I talked to Dana (White) in the back after everybody got picked and we had a three-minute conversation,” recalled Daukaus, who returned to the regional circuit and collected two more submission wins and two more successful defenses of his Cage Fury Fighting Championships (CFFC) middleweight title before getting the call to face Brendan Allen last June. “He was like, ‘I think you’re ready, I just don’t think you’re ready at this moment in time.’

“The performance that I had was good, but it obviously could have been better, according to Dana,” he added. “I thought I did the best out of all the guys that night.”

The fight with Allen was a competitive affair, with Daukaus hanging tough with the highly regarded former LFA champ and getting the better of things in the third round before ultimately losing on the scorecards.

It was the first setback of his career and a major teachable moment for the introspective fighter. 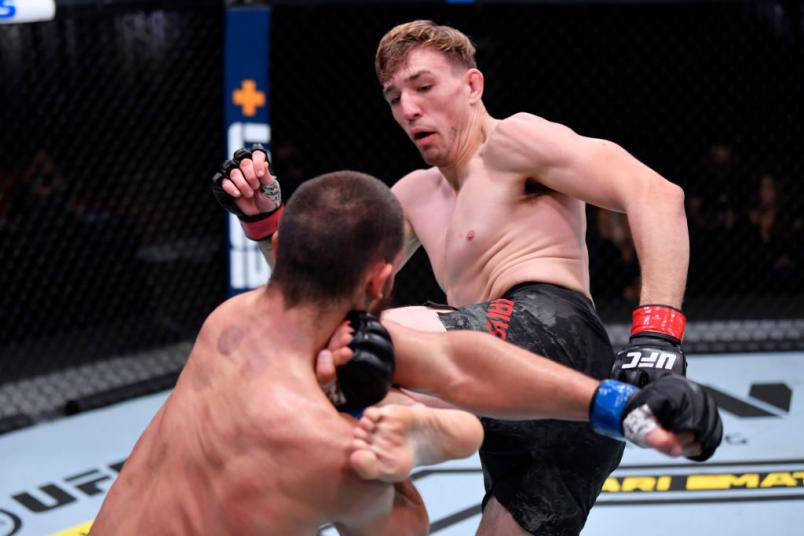 “Before I turned pro, I started doing a lot of mental repetition and mental training — I read a lot of mental performance books and stuff like that,” said Daukaus, who began his professional career with nine straight wins on the highly competitive East Coast regional circuit. “Being as successful as I was when I turned pro, I kind of got away from all that, and I think that made me kind of lazy in a way. Being undefeated, I had all the confidence in the world.

“After I lost, it humbles you a little bit, and I got back to my roots again,” continued Daukaus, who began detailing his daily goals and intentions in a notebook following his loss to Allen. “I got back to what got me there.

“I do the mental repetitions every single fight. Every morning, I have a little five-minute thing that I do in my notebook — I write down my goals for the day, my AM and PM sessions, just so I have it written down and it keep me on top of myself and makes sure that I’ve done everything that I need to be doing.”

He also writes down what is going to happen when he next steps into the Octagon.

Should things work out as detailed in his notebook, Daukaus envisions an active year inside the Octagon and following the path his brother has taken, graduating from facing newcomers and unheralded talents to sharing the Octagon with established names in hopes of ending the year within striking range of the Top 5.

“After I win this fight, after I beat this guy, I’m not going to be asking to fight guys that are making their debuts or fighting guys off of the Contender Series again — I want guys with numbers next to their names and I don’t want to take anything less,” he said emphatically. “I want to climb the ranks and be a potential title contender within the next year or so.

“Maybe at the end of this year I can fight one of the Top 10 guys, and maybe next year I can start cracking that Top 10 and getting my name in the Top 5.”