Kyle Bochniak Ready To Go On A Tear

This Friday, Kyle Bochniak returns from an injury-induced layoff to face Sean Woodson in a UFC Boston bout at TD Garden. But even without that fight under his belt, “Crash” has 2020 already planned out.

It’s the power of positive thinking applied to prizefighting, and maybe that’s what the Boston native learned in the ten months since his last appearance against Hakeem Dawodu in December 2018. 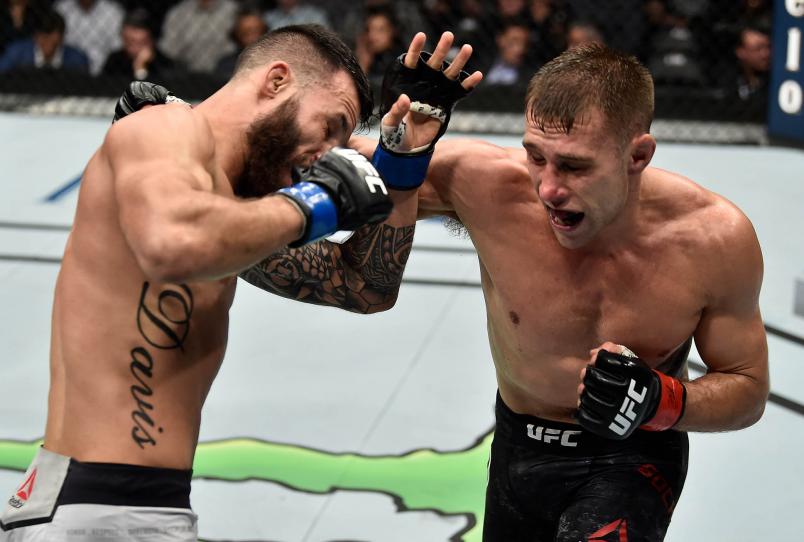 Kyle Bochniak punches Brandon Davis in their featherweight bout during the UFC 220 event at TD Garden on January 20, 2018 in Boston, Massachusetts. (Photo by Jeff Bottari/Zuffa LLC)

“No, not at all,” laughs Bochniak when asked if there were any positives to take from his long layoff. “I had a Fight of the Night performance with Zabit (Magomedsharipov in April 2018) and I wanted to ride that gravy train. Then I had a subpar performance with Hakeem (Dawodu).”

Add in the injury and that’s a long time to dwell on what might have been. But along the way, the 32-year-old did start to get his mojo back.

“I got in touch with why I started doing this in the first place,” he said. “So that fire has been rekindled. I got through it, I’m a hundred percent and it’s time to get back in there.”

To sum it up, Bochniak pulls out an oldie but goodie that many of us heard from our elders when we were about to go through something unpleasant in life.

“It builds character,” he said.

I remind him that he’s shown plenty of character thus far in life and in a six-fight UFC career. He doesn’t deny it, but also believes there’s always room for more.

“When things go south and don’t work out, I try to use it in a way to build strength instead of dwelling on it and saying, ‘Oh crap, why me?’ So I said I’m gonna get as healthy as I possibly can, the fight will come around, and now I’m ready and I’m fighting in my hometown.”

Ah, the hometown fight. Bochniak has a couple of them under his belt as a UFC fighter, losing a hard-fought decision to Charles Rosa on short notice in 2016, and then defeating Brandon Davis in January 2018. You might think someone in Bochniak’s position is a little jaded about competing in TD Garden by now, but you would be wrong.

“This is my third time fighting in the Garden, and every time I drive by it on the Zakim Bridge, I slow down and look at it and it fuels my fire to push hard that day so I’m one hundred percent prepared for October 18th,” he said. “I embrace every fight, but fighting in Boston, man, I train right down the street. Everyone from the suburbs, like Gloucester, my hometown, is gonna be in the Garden, and all my training partners who go to school in Boston or work there are gonna be there. So it’s really cool to represent Boston and I’m excited to fight hard.”

It’s the only way Bochniak knows how to fight, and being an honest fighter has endeared him to fans not just at home, but wherever he’s strapped on the gloves. He appreciates that support.

“It’s very cool for people to say that and it also inspires me to keep pushing the envelope, train harder and fight harder,” he said.

As for that honesty?

“I think it’s helped me a lot,” Bochniak said. “Every time I look at my performances, if it’s not what I wanted, I kinda grieve for a little bit, but then I look at it and look what I did wrong in the fight and what I might have done wrong leading up to the fight. I admit it to myself, admit it to my coaches and we address it and make sure it doesn’t happen again. And I have no problem talking about it, either. I think honesty keeps you humble and, at the same time, I know I’m capable of very extraordinary things and that’s why I’m excited for the future.”