“I never want to be told that I can’t do something.” - Kurt Pellegrino 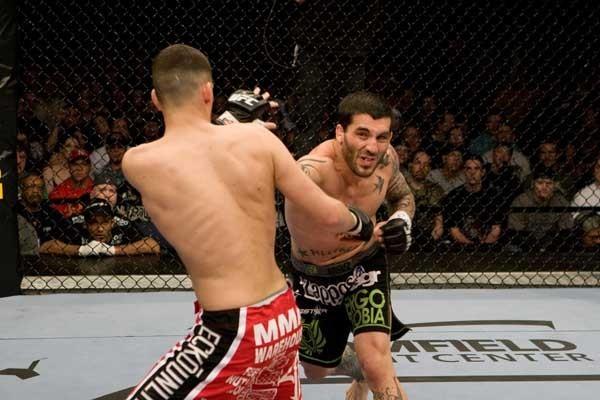 For decades the mantra “Yes we can!” and its Spanish equivalent “Si se puede!” have served as rallying cries for union workers, civil rights organizations and rabid Mexican soccer fans and players. Those three empowering words even became a theme for President Barack Obama’s 2008 campaign for the White House.

It so happens, a slight tinkering of the popular phrase has also anchored the defiant psyche and lofty overachievements of New Jersey’s Kurt Pellegrino. “Yes I can” conviction has been a staple of the UFC veteran’s internal dialogue dating back to childhood. “Yes I can” was not something Pellegrino stumbled across in a self-help book, but a natural instinct, his soul’s response to the ruthless stigma and ensuing hurt that accompanied being placed in special education classes from the 5th grade until graduation.

“I had teachers, principals and adults tell me I would never make it in life. I was treated like a (reject) and a loser,” said the 31-year-old, who fights Brazilian bulldozer Gleison Tibau on March 19 at UFC 128 in Newark, New Jersey. “I remember a kid who I was friends with -- his mother called my mom and said ‘We don’t want our child hanging out with your child because we don’t want him to catch his disease.’ Here I was a young kid and nobody knew what I had. I had to live with that my whole life and deal with people telling me, ‘No you can’t.’

Pellegrino relied heavily on those affirmations after being diagnosed with severe forms of ADHD (Attention Deficit Hyperactivity Disorder) and dyslexia. As a result of the learning disabilities, he said, he only learned to spell his last name in the 7th grade and has long been functionally illiterate.

“I was bullied,” Pellegrino continued, hearkening back to his childhood. “The kids that picked on me and called me (reject) would come to wrestling practice. I used to hear them say, ‘Oh I’m going to go wrestle with The (Reject).’ But that (reject) beat them up. That’s how I became popular.”

Pellegrino wasn’t just any wrestler. He and his elder inspiration, Dan O’Cone, represented the two finest grapplers ever produced in Point Pleasant Beach, NJ. Driven by dogged determination, Pellegrino twice placed second at the New Jersey State Wrestling Championships, an unprecedented and never duplicated feat for a Point Pleasant Beach High School wrestler. It is a truly remarkable accomplishment, especially considering that the tiny town included less than 5,000 residents and that New Jersey – routinely one of the premier producers of wrestling talent in the nation – only crowns one state titlist per weight class. The system puts smaller schools at a considerable disadvantage compared to more populated ones, who obviously reap the benefits of drawing from deeper talent pools.

Dominance on the wrestling mat altered many people’s perceptions of Pellegrino, catapulting him from ridiculed misfit to town hero status. Signs began cropping up on area billboards with his picture on them and the words “Go Get ‘Em Kurt!” Young Kurt proudly dined with the town’s mayor. So high rose his stock that the teenage Pellegrino sometimes parked his car at remote locations and ran to avoid a swell of well-wishers.

“As unbelievable as it sounds, that really happened,” Pellegrino said. “I mean, who am I? I’m a wrestler and I’m having lunch with the mayor of Point Pleasant!? It was very surreal. I was so fortunate to grow up with all of that support in my hometown.”

Pellegrino became a champion off the mat as well, to both his bullied peers and those who tormented them. Armed with this new found clout, young Pellegrino took a stand.

“Kurt, why are you in those classes?” high school classmates sometimes inquired.

“Because I can’t read. I have a learning disability just like these kids that you’re calling a (reject). Am I a (reject)?”

In time, Pellegrino noticed a change in the climate in his school. He was not the only one who had become bully-proof.

“The kids in my classes stopped being beat up and called scumbags and (rejects),” he said.

More than a decade later, Pellegrino continues to uplift children with learning disabilities in his hometown and beyond. One of MMA’s most comical and outlandish characters, Pellegrino is a frequent visitor to high school classrooms and gymnasiums packed with kids who might be either the potential victims or perpetrators of name-calling and bullying. He has teamed up with a national anti-bullying organization called “Kickin’ It,” which is spearheaded by Rocky Marciano Jr., son of the late, great boxer of the same name.

“I’ve always had to deal with negative people. That’s why I always reach out to kids and tell them, ‘Yes You Can,’” he said. “If you have the will to do something, you can do it. People close to my family told me I would never make it in fighting. I had jiu-jitsu teachers and instructors telling me I would never fight in the UFC or Abu Dhabi (Submission Wrestling World Championships). I competed in Abu Dhabi and I’m an 11-time UFC veteran.”

Winner of four of his past five UFC fights, Pellegrino (21-5) is coming off a loss to highly-touted lightweight George Sotiropolous, a gutsy performance that featured Pellegrino tearing an anterior cruciate ligament in the first round yet gamely going the distance on one good leg. That was eight months ago.

“I thought I would never fight again,” Pellegrino said.

Naturally, there are questions about the soundness of that repaired knee and whether it will compromise Pellegrino against arguably the most gigantic lightweight in the world (I once interviewed Gleison Tibau immediately after his victory over Jeremy Stephens in 2009 and he claimed to weigh 194 pounds, and looked every bit of it). Like Pellegrino, Tibau (31-7) is a Brazilian jiu-jitsu black belt. He excels at taking opponents down and smothering them on top like a boa constrictor.

Pellegrino conceded that, deep down in his heart, he did not want to fight Tibau.
By his own admission, Pellegrino is a fighter prone to slacking in training if he doesn’t fear the threat of a future foe.

“I need to wake up and say, ‘I have to train today,’” he explained.

So when Joe Silva called him a few months back, Pellegrino said he made a bold request: “Give me someone you think can beat me.”

Silva served up the suffocation machine that is Tibau. Pellegrino has been complimentary of his muscle-bound opponent, but his initial doubts have eroded.

“He shouldn’t have taken the fight against me,” Pellegrino said with palpable intensity. “He should never have signed the paper to fight me. Because the fight is in my state and I’m coming off a loss, and I’m pissed off.”

Despite skepticism from outsiders, Pellegrino hailed his injury and subsequent recuperation as an “awesome experience” and praised the knee as freakishly stronger than ever. Kenny Florian, his close friend and regular training partner, agrees.

“This is the best Kurt there has ever been by far. All fighters say that, it’s cliché, but it’s truly the case with Kurt,” said Florian, who will be cornering Pellegrino for the bout. “We changed a lot of things for this training camp and he’s followed it.”

At first glance, Florian and Pellegrino appear to be MMA’s odd couple. An on-air commentator for both the UFC and ESPN’s “MMA Live”, Florian typically projects an earnest public aura. But a growing trail of videotape evidence revealed a wackier KenFlo. The Boston College graduate and son of a thoracic surgeon has appeared in several YouTube videos with his trusted sidekick, and low-brow humor is unabashedly unleashed.

“We’re both goofballs and have a passion for training,” Florian said of the connection. “We both like to joke around. We both act like idiots. We’re constantly doing dumb stuff.”

Florian’s favorite Pellegrino skit shows the New Jerseyian spontaneously rapping to Michael Jackson’s ‘Beat It.’ And Pellegrino’s antics are not simply him playing to the cameras. It is him being himself.

“Kurt is a guy who thinks differently. What you see in the videos is really him,” said Eric Samson, sports marketing director for ECKO, a Pellegrino sponsor. “Kurt is nuts and he’s funny. In my opinion Kurt and Rampage (Quinton Jackson) are the two funniest guys in MMA. Forrest Griffin would be right up there with them. Kurt hides behind his joking but he’s a serious competitor. He is an incredibly driven competitor and he hates to lose.”

You will be hard-pressed to find another fighter who raves about his hometown more than Pellegrino, who can euphorically break into a filibuster on the subject. Point Pleasant Beach is a 25 minutes or so car drive from the part of the Jersey Shore where the popular MTV sitcom is filmed (Pellegrino professes to be a huge fan of “Jersey Shore,” by the way, and said he has met JWoww). In his mind, however, his own town is ‘the real Jersey Shore.’

“I grew up surfing, I grew up tan and good-looking, and I’m Italian, so life in the Jersey Shore is awesome,” he said. “I have cops in my town that pull me over just to talk with me. When they drive by my house I feel so protected. This town is my strength, my roots, it’s everything.”

Nearly 14 years after graduating high school, Pellegrino is married and the couple has one child and another on the way. He said he still keeps in contact with the 12 other students who were in his special education classes. He credits them for changing his life and hopes the defiant spirit that guided his incredible journey will be contagious to others.

He is living proof of the upside of stubbornness.

Said Pellegrino: “I never want to be told that I can’t do something.”