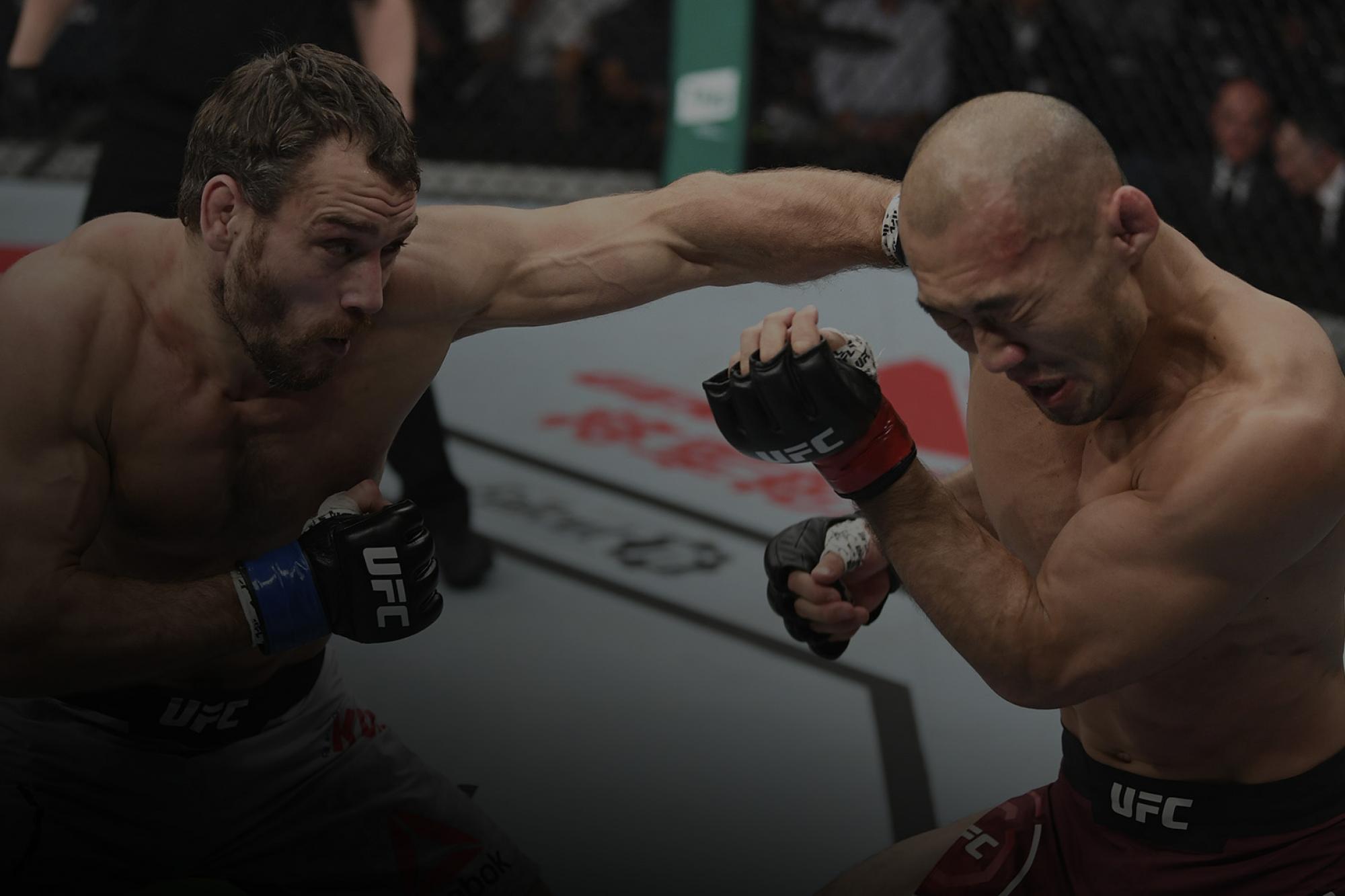 Russian welterweight Aleksei Kunchenko made it 20-0 as a pro in UFC Fight Night prelim action from the Adelaide Entertainment Centre, as he delivered a one-sided three-round unanimous decision win over Yushin Okami.

Kunchenko put in a workmanlike effort in the opening frame, beating Okami to the punch throughout while outworking the Japanese veteran, and he added to his lead in the second round as he continually stuffed Okami’s takedown attempts, making “Thunder” pay for each miss.

A right hand early in round three stunned Okami, but the Kanagawa product was able to clinch and clear his head. He still wasn’t able to get Kunchenko down, though, and he ate a bunch of hard elbows for his trouble. That frustrating sequence told the tale of the fight for Okami, who wasn’t able to do anything with Kunchenko, who turned in a dominant effort in victory.

Flyweight contender Wilson Reis got a much needed victory, as he snapped a three-fight losing streak with a unanimous decision over Ben Nguyen.

Reis got the bout to the mat in the second minute of the first round, but Nguyen worked his way upright and separated from the Brazilian jiu-jitsu black belt. At range, Nguyen was able to work his striking game, only to be put back on the mat with a minute left. Nguyen continued to defend well as he got back to his feet, but Reis stayed locked on, and that was a good description of the rest of the bout, as Reis wouldn’t stop moving, whether on the feet or the mat. Nguyen was competitive throughout, but he wasn’t able to put together a consistent offensive attack to deter the Brazilian veteran.

Keita Nakamura bounced back from an April loss to Anthony Rocco Martin with a three-round split decision victory over Poland’s Salim Touahri.

The first round was fairly slow in terms of action, with Touahri’s forward motion likely earning him the frame. Nakamura (34-9-2, 1 NC) scored a flash knockdown early in round two, and his follow-up work at close range began to put Touahri (10-3) on the defensive for a spell. And while the bout kept to this close, back-and-forth pace, when it was all said and done, the Japanese veteran did enough to take the bout via scores of 30-27, 29-28 and 28-29.

Former Ultimate Fighter competitor Kai Kara-France got his long-awaited UFC debut under his belt and it was an impressive one as he defeated fellow flyweight prospect Elias Garcia via unanimous decision.

Garcia went in for the takedown immediately and looked to lock up a leg as the two hit the deck. Kara-France scrambled out of trouble and into his foe’s guard. With a little over two minutes left, the two rose and Kara-France began firing off strikes, but it was Garcia’s left hand that put the New Zealander on the deck midway through the round. Kara-France recovered quickly and his strikes set up another trip to the mat, which was fine with Garcia, who looked for submissions from his back. Kara-France’s ground strikes did their job though, allowing the Auckland favorite to take his foe’s back in the final minute before he went back to unleashing strikes on the grounded Californian.

The furious pace didn’t let up in the second round, with both fighters trading punches until they hit the deck and Garcia nearly finished the bout with triangle and armbar attempts. Once Kara-France got free, he worked his ground-and-pound attack, piling on the punishment for the rest of the round.

Garcia, who was a short-notice replacement for the injured Askan Mokhtarian, falls to 6-2.

Christos Giagos earned his first UFC victory since 2015 in lightweight action, as he scored a three-round unanimous decision over Japan’s Mizuto Hirota.

Giagos had a strong first round, rocking Hirota with several hard shots on the feet while adding in a couple takedowns that added to his point total on the scorecards. Hirota was far from out of the fight, but he wasn’t able to edge his foe in the opening frame.

Controlling matters on the mat for much of the second frame, Giagos has another solid round, but Hirota did rally with his strikes later, giving him some momentum as the final round approached.

Hirota got his own takedown in the opening minute of round three, but Giagos got up and turned the tables with another trip to the mat. When the two rose, Giagos was visibly tired, but he kept relying on his grappling to keep Hirota at bay. “Pugnus” had one last charge in him as he got into the mount in the final 20 seconds, but it wasn’t enough to turn the fight around.

In a meeting of UFC lightweight newcomers, Russia’s Damir Ismagulov moved to 17-2 as a pro with a shutout three-round unanimous decision over Australia’s Alex Gorgees.

The pattern of the fight was established early and continued for 15 minutes, with Ismagulov using his striking to set up takedowns that were followed by long periods of ground control. Gorgees (7-1), who took the fight on short notice, was never able to get on track offensively, leading to his first pro defeat.