"As long as I’m going out there, putting on a great performance,
impressing the fans, impressing the UFC, then I’m going to be very happy
and I’ll continue on fighting in the UFC for a long time." - Krzysztof Soszynski 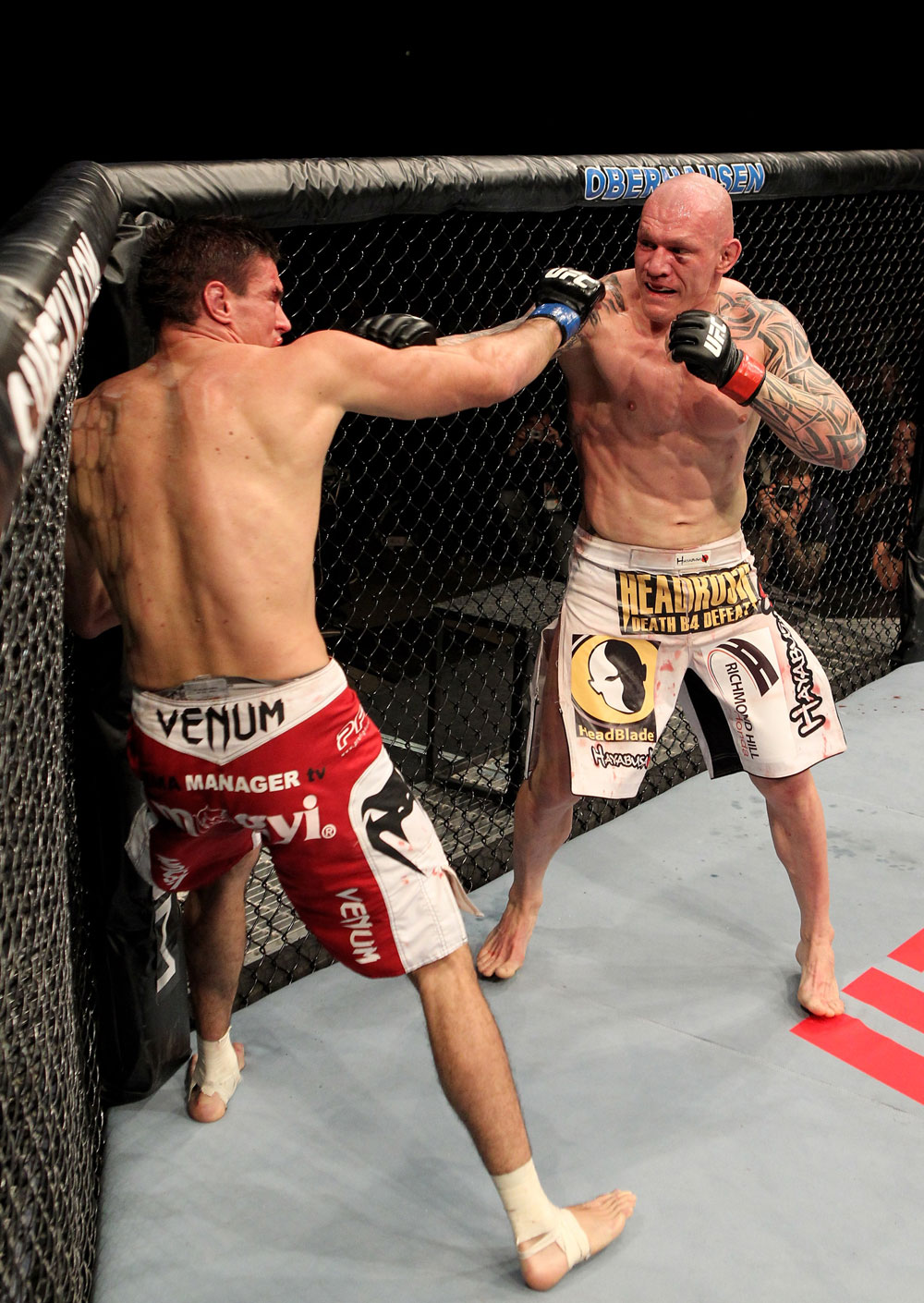 Heading into his meeting with Igor Pokrajac at UFC 140, Krzysztof Soszynski is focused on one thing: entertaining the fans.

Riding a two-fight winning streak into his second fight on home soil this year, the Winnipeg, Manitoba product doesn’t offer any of the standard clichés about stringing together victories, making a run at the title, or this being his time. Instead, he’s refreshingly candid and honest about where he stands and what he sets out to do when he steps into the cage.

“I don’t have the greatest talent when it comes to mixed martial arts. I’m not a great striker, great wrestler, a good jiu-jitsu guy — I feel like I’m decently well rounded, but the one thing I like to go do is put exciting fights on.

“As long as I’m going out there, putting on a great performance, impressing the fans, impressing the UFC, then I’m going to be very happy and I’ll continue on fighting in the UFC for a long time. That’s my goal.”

Since graduating to the UFC from Season 8 of The Ultimate Fighter, Soszynski has amassed a 6-2 record, a mark that indicates he might be selling himself short in his self-assessment.

After collecting a trio of victories to start his UFC career, the 34-year-old one-time professional wrestler was bested by Brandon Vera at UFC 102. A pair of entertaining and violent battles with Stephan Bonnar followed, first at UFC 110, and then again five months later at UFC 116.

He lost the second meeting with Bonnar, but has since earned a pair of unanimous decision victories, most recently defeating Mike Massenzio at UFC 131 in Vancouver, British Columbia.

Though he’s happy to earn the victories, Soszynski wasn’t overly pleased with his performance in either of his most recent wins. The bouts lacked the excitement Soszynski prides himself on bringing to the cage, the kind of excitement he created with Bonnar.

“My last two were a little dullish — I was fighting guys that wanted to take me down rather than stand and strike with me, so I’ve been wanting to best those fights. The two previous ones that were with Stephan Bonnar were absolute wars.

Originally scheduled to meet in June, Soszynski hopes that he and Pokrajac can deliver the kind of back-and-forth slugfest that gets fans out of their seats now that they are finally going to stand opposite each other in the Octagon.

“I’m definitely looking forward to it. I was a little disappointed when he had to pull out of the last fight in Vancouver because of an injury,” he said. “I really like his style — he’s a good kickboxer, likes to stand-and-bang, likes to go toe-to-toe, which I’m really excited about.

“Those are the kind of fights that I want. He might maybe look to take me down, but I’m going to be ready for everything, like I always am. I’m hoping he wants to stand-and-bang, have a fun fight with me, but if it goes to the ground, it goes to the ground; I’m pretty good there too.”

The hulking light heavyweight with the disarming smile is also pretty good in front of a camera and on film.

With a role in the upcoming Kevin James MMA vehicle Here Comes the Boom and fresh off serving as Mickey Rourke’s stunt double in Immortals, Soszynski has enjoyed the challenges that have come his way outside the cage. But make no mistake about it — his new adventures remain secondary to his career inside the Octagon.

“For right now, I’m having a lot of opportunities outside of fighting coming my way, and I’m exploring those opportunities as well; they’re great. They’re fun because it’s something completely different from what I’m used to doing, so it’s nice to have those opportunities. But first and foremost, I’m a fighter; that’s how I make my living, and I’m really looking forward to continuing that.”

While the prospect of hanging up the four-ounce gloves is something many fighters struggle with, Soszynski knows that time is coming for him.

“It’s kind of see what happens and take it as it comes. I spoke with my family — I spoke with my wife — and we’ve kind of discussed that I don’t have much time left. I’ll be one of the first guys to admit to you that my body was never meant for this sport. I’ve known that from the start, and I know that now for sure.

Next up, he’ll be on location at the Air Canada Centre in Toronto, standing under the bright lights inside the Octagon, working without a script, unsure of the outcome, but hopeful that he’ll entertain.

“I’m not very good at predictions; I’m not a big fan,” he laughs. “What I can tell you is that I’m 100-percent ready, physically and mentally. I’m looking to go in there, throw a lot of punches, a lot of kicks, and go toe-to-toe with Igor.

“Whatever situation comes to me, I’ll be ready. I’m just looking forward to putting on a great fight for all the fans in Toronto and all the fans that will be watching on Ion TV.”