The Middleweight Is Ready To Take Another Step In The Right Direction At UFC Fight Night: Reyes Vs Prochazka
By E. Spencer Kyte, on Twitter @SpencerKyte • Apr. 27, 2021

Krzysztof Jotko made his UFC debut on December 7, 2013, posting a unanimous decision win over Bruno Santos on the preliminary card of a Fight Night event headlined by the classic heavyweight battle between Mark Hunt and Antonio “Bigfoot” Silva in Brisbane, Australia.

Since then, the Polish middleweight has logged a dozen more trips into the Octagon, competing on three continents, spanning eight different countries, and 12 cities, but the one place he’s never fought is Las Vegas… until now.

“This was always my big dream: to fight in Las Vegas,” said Jotko, who makes his 2021 debut this weekend in a main card showdown with fellow streaking middleweight Sean Strickland. “Las Vegas or MSG in New York — they’re the biggest places for mixed martial arts fights and I’ve always wanted to compete in one of those places.

“It would be better if we fought in Las Vegas with a crowd, but we know how the world works now, so a fight with no people will be good for me too.”

When you realise that it's a third win in a row! 🤣 #UFCFL pic.twitter.com/g9vV3m5zgb

Fans or no fans, the 31-year-old Jotko is just happy to finally be competing again, as the last couple years of his career have been slowed by injuries, making it difficult for him to maintain any real momentum despite having won three straight.

“It’s very, very bad for me because I have three straight wins, but now it’s another year I need to rest because I broke my shoulder, but this is part of being a fighter,” he said, arriving at the same “what can you do about it?” conclusion any fighter that has been slowed by extended stays on the sidelines eventually reaches.

“This was super-frustrating, though,” he continued. “I was getting ready to fight with Makhmud Muradov and I threw out my shoulder. I still wanted to fight with my injured shoulder, but one week before the fight, I broke something in my foot and that showed me that I needed to pull out of the fight.”

While it took a second injury cropping up to force Jotko to make the decision to withdraw from the contest, the fact that he ultimately arrived at that conclusion is actually a sign of growth for the Polish kickboxer.

Like many of his contemporaries, Jotko has made the walk to the Octagon on more than a few occasions carrying an injury that was serious enough to merit pulling out of the fight, but a mix of stubbornness, creative thinking, and a desire to step into the cage and compete often propelled him into battle, nonetheless. 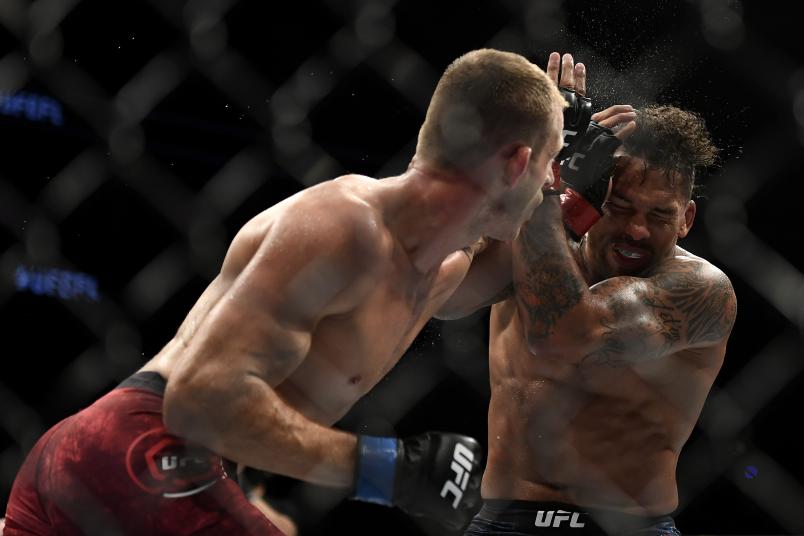 Though he makes no excuses for the setbacks he’s incurred over the course of his UFC career, including the three-pack of defeats that preceded his current run of success, Jotko has learned from those instances where he competed at less than full health and is working to be a little smarter about his decisions as he aims to extend his winning streak and work his way back into the middleweight rankings.

“Before with my three losses, I’d have a broken hand and go in with a broken hand, and I wouldn’t care about it; I just wanted to fight,” admitted Jotko, who has also began working with a mental coach as part of his training at American Top Team in South Florida. “I was younger and hungry to fight, so if there was a little injury, I would say, ‘I don’t feel it.’

“It was stupid, thinking that I wouldn’t feel it in the fight because of adrenaline and you can fight through it, but it’s not like this,” he added with a laugh. “Now, I’m a little smarter about this. I know I need to be healthy to take a fight.”

Back to full health and eager to kick off his 2021 campaign, Jotko is excited to share the Octagon with Strickland on Saturday night in Las Vegas, as it represents a clear opportunity to put himself back in the Top 15. 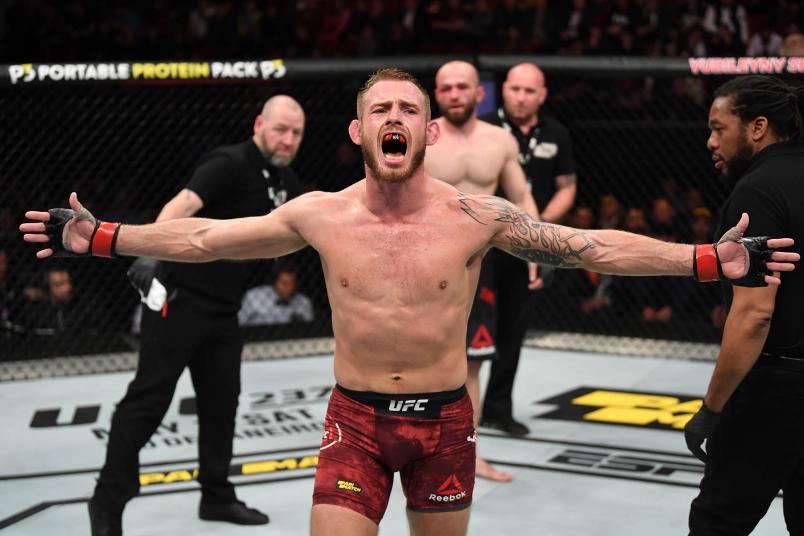 Krzysztof Jotko reacts after the conclusion of his middleweight bout against Alen Amedovski of Macedonia during the UFC Fight Night event at Yubileyny Sports Palace on April 20, 2019 in Saint Petersburg, Russia. (Photo by Jeff Bottari/Zuffa LLC)

Like Jotko, Strickland enters this weekend’s contest on a three-fight winning streak, but a lot changed for the now 30-year-old middleweight.

Shortly after his October 2018 win over Nordine Taleb, Strickland was in a gnarly motorcycle accident that left him with numerous injuries and sidelined him for more than two years. Last fall, he returned to the Octagon and the middleweight division, registering impressive victories over Jack Marshman and Brendan Allen two weeks apart to remain unbeaten in the 185-pound weight class and push his overall record to 22-3.

“I expect it will be the toughest fight in my career — Sean is a very tough guy, very tall, very good technical boxing, and he has good cardio and he’s never tired,” offered Jotko. “This is a new thing for me because always in my fights, I was never tired and people that were fighting me would be getting slower and I would win the fight.

In addition to the challenges Strickland brings to the table, Jotko is also feeling energized by the recent successes of his compatriots, light heavyweight champion Jan Blachowicz and lightweight Mateusz Gamrot, as well as former strawweight queen Joanna Jedrzejczyk.

“This is eight years in the UFC for me and we can see the Polish power: Joanna Jedrzejczyk, Jan Blachowicz, last month, Mateusz Gamrot, and now it’s my time — Krzysztof Jotko,” began the confident middleweight, who trains alongside Gamrot and Jedrzejczyk at American Top Team. “The Polish people, we have big confidence. I can see Jan grow his confidence and he is a champion. The same with Mateusz Gamrot — he came to UFC, lost his first fight, but then wins a big fight by knockout.

“If Mateusz Gamrot, a wrestler guy, can knock out people, then I should be able to knock out people easily because I am a striker,” he added with a laugh, though he’s only half-joking.

After another longer than expected layoff, Jotko has been champing at the bit to get back into the Octagon and resume his quest to reclaim a spot in the rankings and work his way into title contention, beginning this weekend, when he finally gets to cross “Fight in Las Vegas” off his professional bucket list.