Poland isn’t exactly known for its tropical climate, yet despite this reality, Orneta’s Krzysztof Jotko is doing just fine in his new digs in Florida.

“I love the heat,” said Jotko. “Before, I lived a little bit in Thailand and I was born in August, so I love the hot months and the heat in Florida. Sometimes it's too hot in the summer, like now, but I still love it.”

Everything is clicking at the moment for the middleweight standout, who faces Marc-Andre Barriault this Saturday in a UFC 240 main card bout. He bought a house in the “Sunshine State,” and he’s ready to make his run to the top like another Poland native turned Floridian, former strawweight champion Joanna Jedrzejczyk.

Nearly six years into his run on the UFC roster, Jotko has gone through the ups and downs of life in the Octagon and is still standing. From five-fight winning streaks to three-fight losing skids, Jotko has seen it all, and following an April victory over Alen Amedovski, he’s feeling like the best is yet to come.

“A hundred percent,” he said. “I feel I've grown up now. I'm stronger and smarter, and after my three losses and a lot of injuries, I feel like I'm a different fighter and a different person.”

It’s amazing what one win can do, but after losing three straight in 2017-18, Jotko needed to get the job done against Amedovski and he did just that. Yet he admits that he went into the bout in Saint Petersburg, Russia with his mind clear.

“I didn't feel a lot of pressure,” Jotko said. “Maybe a little bit. But I had a very, very good camp, and Amedovski was not on my level, so I was not worried about it. But of course, in the back of my head, I was thinking that if I lose the fight, I could lose the UFC contract, but I thought very positive and I just went there and did my job.“ 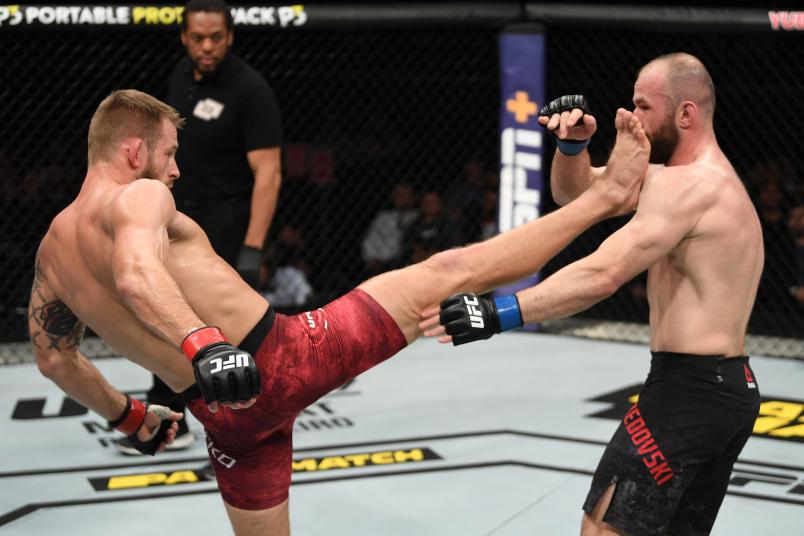 When it comes to experience, especially on the UFC level, Jotko holds a huge edge on Canada’s Barriault, as well. So while he expects a tough fight, he also expects to leave Edmonton with a victory.

“I think this guy is a little different than Amedovski. He's much better on the ground, has much better wrestling but, like you say, I've seen everything,” Jotko said. “I was at the top, I was down, and now I'm going to the top again and this will be a very, very good night and a good win for me.”

It’s also another stamp on the passport for a fighter who has been to Germany, Australia, Sweden, Ireland, England and Brazil over the course of his career. That’s impressive in its own right, and Jotko doesn’t take it for granted.

“UFC is like my home,” he said. “I changed my life for UFC. I moved to Florida to have very good training and be in the UFC and, for me, it's a very nice adventure and a very nice story. I've been to many countries and if I wasn't fighting in the UFC, I don't know if I'd see a lot of places like I have. So I'm so happy that UFC still wants me. They gave me another contract, so I'm very appreciative for that.”

What could be better? Jotko has an idea.

“You know what my dream is? Everybody talks about Las Vegas and I want to fight there next. I want to fight in Vegas. I'll just finish my job in Edmonton and then I'm ready for Vegas.”