Read on for UFC 201 prelim results 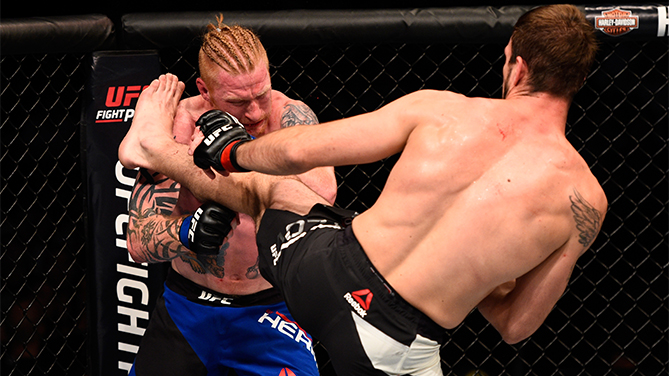 Nikita Krylov’s fifth consecutive win may have been his most impressive to date in the UFC, as the No. 11-ranked light heavyweight from Ukraine scored a walk-off second-round knockout of veteran Ed Herman in UFC 201 preliminary action at Philips Arena in Atlanta.

True to form, Krylov started fast, with his kicks and long punches keeping Herman at bay. “Short Fuse” had some positive moments in the clinch and on the mat, but by the end of the first round, the frustration and effects of Krylov’s blows were evident on his face, with a left kick to the head kust past the midway point of the frame being particularly damaging.

In the second, Herman appeared to be getting into a rhythm when he responded to a spinning backfist with some hard counters, but then Krylov unleashed a left kick to the head that sent Herman down and out at the :40 mark of round two. 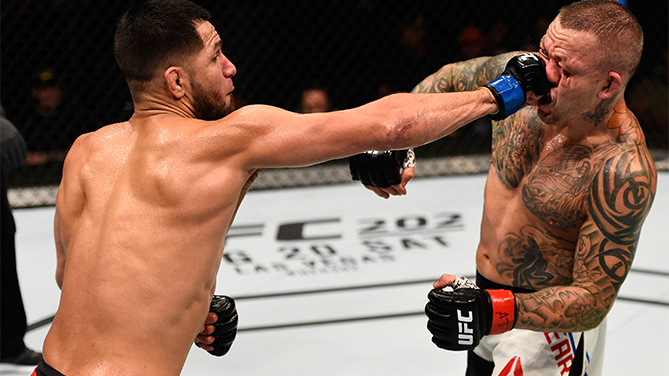 For two fighters used to being in close fights, it was no surprise that the first round between Pearson and Masvidal was a competitive one, with Pearson employing a busy striking attack and Masvidal scoring with some flush counters as well as some hard knees to the body in the clinch.

A short left hook opened things up for Masvidal in the second minute of round two, as he dropped the Brit and nearly finished him. Pearson survived the ensuing onslaught, but Masvidal was now in control as he looked to pick his shots and get his foe out of there. Pearson recovered well, scoring a takedown with a little over a minute remaining, but Masvidal got up immediately, resumed control and maintained it throughout the third round, capping off a big victory. 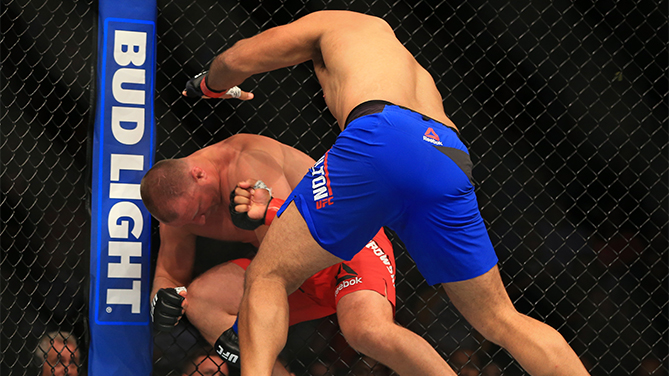 Anthony Hamilton had no intention of sticking around for too long in his heavyweight bout with Damian Grabowski, and he got his wish, halting his foe via first-round knockout.

Hamilton blitzed Grabowoski at the opening of the bout and never let up. After winning the exchanges at close range and hurting the Poland native, a series of uppercuts against the fence ended the bout emphatically, with referee George Allen stepping in at the 14-second mark.

Albuquerque’s Hamilton moves to 15-5 with the win; Opole’s Grabowski falls to 20-4. Hamilton’s win is the second fastest in UFC heavyweight history. 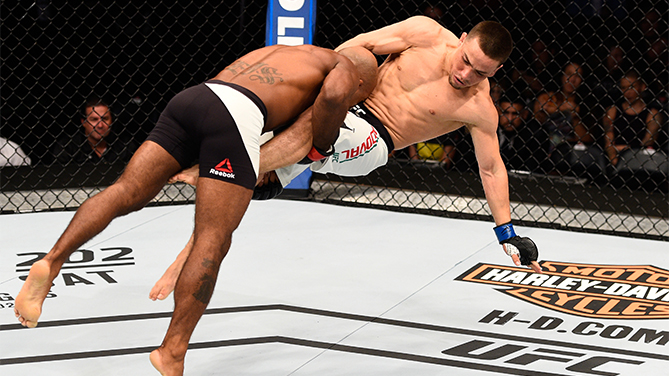 Originally scheduled to face Demetrious Johnson for the UFC flyweight title Saturday night, No. 7-ranked Wilson Reis adjusted to the opponent switch and put in a professional and impressive effort against newcomer Hector Sandoval, ending the bout via first-round submission.

Sandoval looked sharp offensively and defensively as the bout opened, not intimidated by the moment, but in the second minute, Reis showed his veteran experience in emphatic fashion, taking Sandoval down and flattening him out as he took his back. The rear naked choke that followed forced Sandoval to tap out at the 1:49 mark put Reis in the record books, as he scored the fastest submission in UFC flyweight history.