The Heart Of Kris Moutinho

Kris Moutinho would have kept fighting. That’s just the way he’s built. You can’t teach it, you can’t read about it or watch a YouTube video on it; the type of heart the Milford, Massachusetts native displayed against Sean O’Malley last July is something you have or you don’t.

Moutinho has it. But he’s got a lot more that he wants to show this Saturday against Guido Cannetti.

“I want to be known as the guy who goes out there and beats people's ass and not the guy who gets an ass whupping and can just take a punch,” he said. “I always knew I could take a punch; I'm from an area where you're taking punches every day. This is the way it is. Whether it's cold, whether it's just angry Ma**holes, this is where I am. This is what I grew up in and what I'm used to. I'm used to being the little guy getting beat up, getting bullied, getting picked on. It didn't change anything. I already knew I was tough; now I gotta show everybody I'm skilled also.” 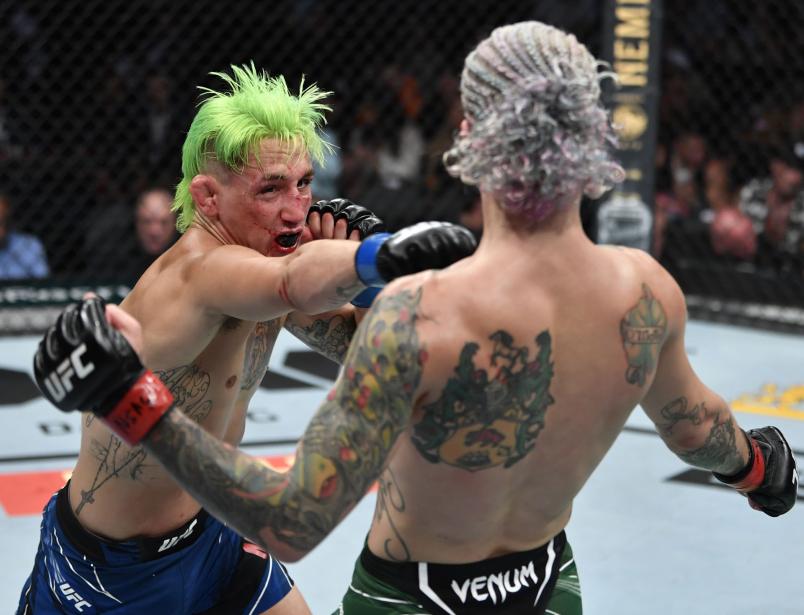 As far as introductions go, Moutinho’s UFC debut against “Sugar Sean” was both good and bad. The bad is that it was a short notice call on a high-profile pay-per-view card against a high-profile opponent in O’Malley that ended up in a third-round TKO loss. But the good is that Moutinho was in there slugging away until the bitter end, determined to silence any doubters. Mission accomplished there, because when it was over, all anyone wanted to talk about was the gritty New Englander. He’s happy with that part of it - and the Fight of the Night bonus - but the rest, let’s just say he wants a different overall experience on Saturday.

“I didn't think it was gonna be such a fast rise up in people's eyes from taking a beating, to be honest about it,” he said. “I took a little bit of a beating, and I didn't follow the game plan that my coaches set out for me. I understand we had ten days, but I didn't really do what I was supposed to do. I just went out there and got into a pissing contest and I lost. It is what it is. I'm happy to the extent that it's gone because it's allowing me to do this full-time and allowing me to make a little money on the side of just being able to train and do what I love to do, so I'm happy it went that way, but I'm not satisfied.”

You wouldn’t expect any fighter worth his salt to be satisfied, and the 29-year-old bantamweight is all fighter, and has been ever since he first strapped on the four-ounce gloves. For him, this was an inevitable path for him once he started.

“It's the only thing that you truly get to test if you're a man or not,” Moutinho said of fighting. “It's one on one, it's me versus him, and I get to go in there and find out if I'm better than that person. That's something that I've always wanted since I was a kid. I was always playing sports and I was always competitive, and competition's the only thing that drives me in life; it's the only thing I've ever wanted to do. I was growing up as a young kid, not knowing what I wanted, and then I found wrestling in high school, and it was the same thing - it's you and another man. You can't blame anybody else for your shortcomings, and when I got older and didn't really know what I wanted to do with my life, that's all I was searching for, that feeling of am I better than him, and how do I really test myself and how do I prove to myself that I can overcomes things? I found MMA and it literally changed my life. It gave me purpose, it gave me drive. So money and all that other stuff, if I get that with it, that's cool, but that's not what I'm in this for. I'm in this to truly test myself as a man and see if I'm worthy.”

A pro since 2016, Moutinho had his ups and downs while compiling a 9-4 record on the regional circuit, but when the call came to replace Louis Smolka on the UFC 264 card at T-Mobile Arena, he didn’t hesitate to accept the O’Malley bout, simply because this was the kind of test he craved. Then the whirlwind sucked him in for the next 10 days. 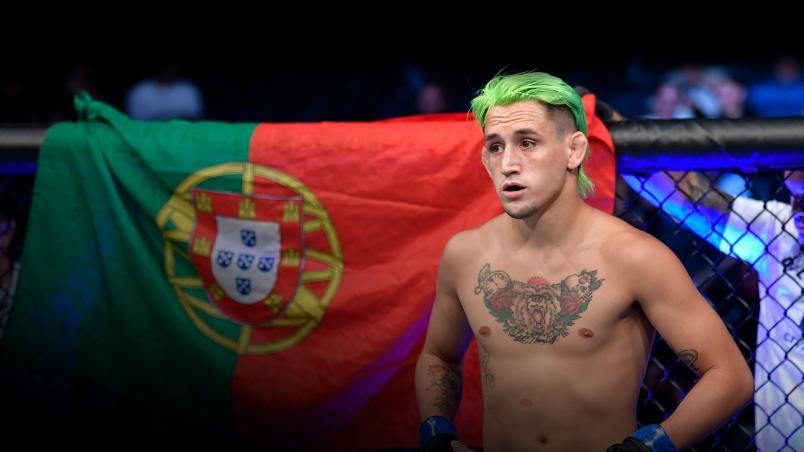 Kris Moutinho prepares to fight Sean O'Malley in their bantamweight fight during the UFC 264 event at T-Mobile Arena on July 10, 2021 in Las Vegas, Nevada. (Photo by Jeff Bottari/Zuffa LLC)

“The first time was a little stressful with the height of the opponent and how big he is and how many interviews I had to do and how crazy the whole situation was,” he admitted. “So I didn't really get time to enjoy it the last time. I was kinda just like, let's go, we got a job to do, let's go fight and that's all I really cared about. Everything else was just stress.”

And that was before the fight. It makes you wonder what the morning after was like.

“Not much different than every other fight,” Moutinho laughs. “I woke up, I was still as ugly as ever, next to a girl that I'll never deserve, and we just went and got some s**tty food and I got really fat. (Laughs) No different than any other fight. I just got to be in a place I knew I deserved to be and now I get to build the life that I know I'm worthy of.”

That’s the thing. He’s here now. Sure, he had to go through 14 minutes and 33 seconds of Hell, but he got another fight and another chance to prove that he belongs in the big show. And this time, he’ll get a chance to take everything in on the way to fight night.

He always has, so don’t expect anything different against Cannetti. Again, that’s the way he’s built.

“If you watch any TV shows that have people from the north and people from the south, the people in the north are always tougher,” Moutinho said. “They're from a different breed, man, just living in the cold, living angry and miserable, and it is what it is. I'm just happy to be from where I am and be from this small town. I also feel like the people have been getting on my side a little bit more because I'm just a relatable dude. I'm just a simple dude from a small place. I'm not trying to be famous, I'm not trying to be some superstar and live these crazy things. I'm just like every other normal person.”