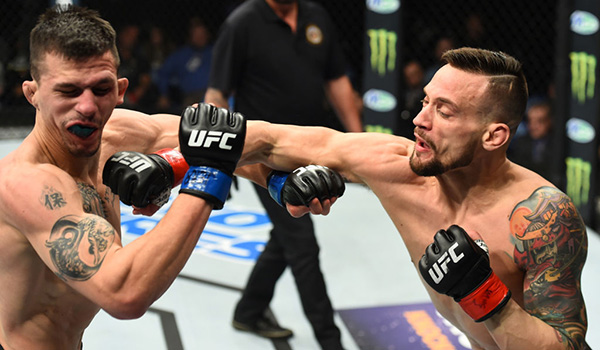 White (12-4) was sharp with his striking in the opening stages of the bout, but Krause (24-8) countered with a grappling attack that resulted in a takedown two minutes in. From there, Krause took over, as he implemented his ground game for the rest of the frame.

The standup action heated up in the second, with White holding the advantage once again, but Krause getting in some shots of his own before he put “The Spartan” on the deck again just before the two-minute mark and again controlled the fight on the mat.

The third was the perfect cap to a grueling battle, as White rocked Krause on the feet and Krause returned the scoring favor with his grappling on the mat, and it was Krause’s ground work that earned him the victory via three scores of 29-28.

Both fighters came out throwing hard, and Frevola got the worst of an early exchange as a left by Reyes sent his mouthpiece flying. Reyes tried to finish, but Frevola got a brief reprieve when referee Dan Miragliotta stopped the action to replace the New Yorker’s mouthpiece. When the action resumed, so did the slugging, but when Reyes landed a right flush on the chin, it was all over, as Frevola hit the deck hard, prompting an immediate stoppage from Miragliotta at 1:00 of round one.

The third time was the charm for Mexico’s Irene Aldana, as she scored her first UFC victory in three tries in bantamweight action, shutting out Brazil’s Talita Bernardo.

Aldana dominated the first round behind her stellar striking attack, one that included a right hand with just over three minutes left that put Bernardo in deep trouble. The Brazilian tried to take the fight to the mat, and she did buy herself some valuable time, once Aldana got her hands free, it was time to dish out more punishment, and she left Bernardo bloodied and battered by the end of the first five minutes.

The game Bernardo hung in there in round two, taking Aldana to the mat early on and she kept it there until the closing minute, but Aldana stayed busy with strikes from the bottom, landing hard elbows that kept Bernardo from getting too comfortable.

Aldana’s dominance on the feet was in evidence again in round three, but Bernardo did get in some shots of her own before a takedown in the final two minutes. Aldana didn’t allow her foe to keep her grounded for long, though, allowing the Mexican battler to stay out of danger and in control.

With the win, Guadalajara’s Aldana moves to 8-4. Rio de Janeiro’s Bernardo falls to 5-3.

Back from two years of mandatory military service, South Korea’s Kyung Ho Kang picked up where he left off in 2014, scoring a first-round submission victory over Argentina’s Guido Cannetti to up his winning streak to three.

Now back to your regularly scheduled programming ...

Kyun Ho Kang gets the triangle submission finish with :10sec left in the round!! WOW! #UFCSTL pic.twitter.com/fygLPBasCu
— UFC (@ufc) January 15, 2018

Cannetti (7-4) started strong, rattling Kang (14-7, 1 NC) with a left hook that prompted a takedown from the returning vet, but it was later in the round that Kang took over, as he threw Cannetti to the mat and subsequently locked in a triangle choke. Cannetti tried to slam his way out of trouble, but that only tightened the choke, with Cannetti forced to tap out at the 4:53 mark.

A longtime standout at flyweight, Jessica Eye had her difficulties in the Octagon at bantamweight, but in her first UFC bout at 125 pounds, she returned to the win column, taking a hard-fought split decision over Brazil’s Kalindra Faria.

Faria got after it as soon as the fight began, catching Eye with some solid punches before a left kick to the head 45 seconds in rocked the Cleveland product. The fight then went to the mat, and the two proceeded to trade leg locks and strikes until the closing seconds of the frame.

Eye pulled Faria back down to the canvas to start round two, and she worked for a choke as she took her foe’s back. And while she didn’t get the finish, she dominated the grappling from that position from start to finish.

Faria rebounded in the final frame with knees, kicks and punches, and though Eye was scoring with her jab, in a close fight she needed to be busier, and she did just that with a takedown midway through the round. With 1:40, the two rose, but seconds later, Eye put the fight back on the mat and kept it there until the horn.

The first three minutes of the fight were fought on the feet, with little significant scoring outside of a leg kick by Taylor and some sharp counterpunches from Aldrich. Aldrich scored a takedown with a little under 90 seconds left, and that was likely enough to earn her the round.

In the second, Aldrich was able to largely control the standup action from long range thanks to a sizeable height advantage, and while Taylor started getting a little busier late in the round, it wasn’t enough for her corner, who implored her to pick up the pace in the third. But in that final frame, it was Aldrich who led the action and landed with some of her best shots of the fight.

The action was non-stop in the opening round, with both trading the advantage in the grappling game. And while Santiago and Burnell each had submission attempts, as the round progressed, it was Santiago holding the scoring edge thanks to some good striking in the clinch and on the mat.

In the second, it was Burnell’s time to surge, as he got the fight back to the mat and put the Chicago product in trouble on two occasions, the most serious being a rear naked choke in the closing seconds of the frame. And while he wasn’t able to finish Santiago in the third, his control of the location of the fight throughout cemented his victory by three scores of 29-28.