Krause Back on Track with Sub Win 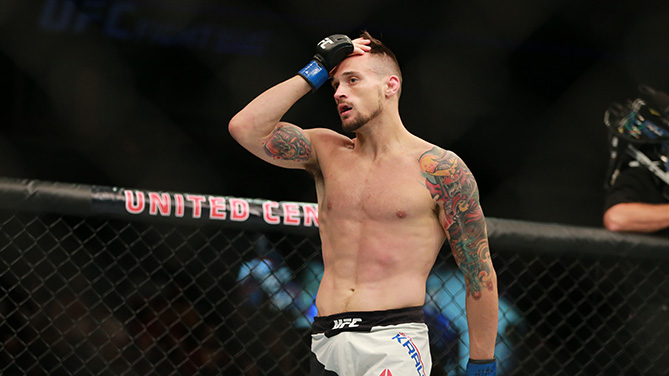 In need of a victory after losing three of his last four, lightweight veteran James Krause came up big in UFC Fight Night action at United Center in Chicago Saturday afternoon, submitting Daron Cruickshank in 87 seconds.

Despite the height differential between the two, the shorter Cruickshank stayed busy with his strikes and had some success as the bout began. But as soon as Krause decided to make his move, he got Cruickshank to the mat, took his back, and sunk in the rear naked choke that produced the tap out at the 1:27 mark.

With the win, Lee’s Summit, Missouri’s Krause upped his record to 22-7; Detroit’s Cruickshank falls to 16-7 with 1 NC.

HOLBROOK vs. NIJEM
Unbeaten Octagon newcomer Andrew Holbrook made an immediate impression in his debut, upsetting former Ultimate Fighter finalist Ramsey Nijem via split decision in a back-and-forth bout that nonetheless produced a final verdict that didn’t sit well with the fans in attendance.
“I had double the strikes and double the takedowns. How do you lose with that?" Nijem said. "I couldn’t finish him because he was strong as hell, but I almost knocked him out twice. I’m not mad at him, it’s not his fault, he’s not a judge.”

Holbrook didn’t look like a UFC rookie in the opening round, fighting well off his back and showing off good defense. The aggressive offense of Nijem likely won him the round, with a couple takedowns and some good strikes on the feet and the mat putting him in the lead.

Nijem kept the pace high as round two opened, tagging and rocking the Indiana native before the two locked up against the fence. When the bout moved back to the mat, Holbrook went fishing for submissions, but Nijem’s Octagon experience served him well. Holbrook’s pressure began to pay off in the second half of the round though, as he nearly sunk in a choke.

The pattern of the previous two rounds stayed true in the final frame, Nijem aggressive everywhere the fight went, but Holbrook never too far away from pulling off a submission on the mat, making it a nightmare for the judges to score.
“I could’ve done better," Holbrook said. "There’s always things you can work on, no matter. You can have a :10 knockout and there’s still things you can fix. I wish I would’ve stopped a couple of more takedowns. There was a few things we worked on that I wasn’t able to capitalize on. I’m still going to work on some things, but I feel pretty good.” 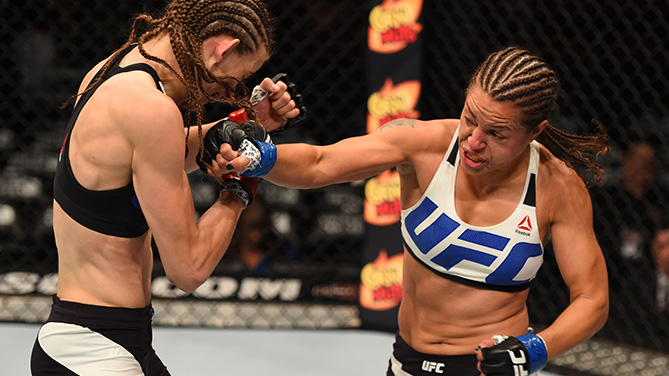 After being on the short end of two controversial split decisions, bantamweight Elizabeth Phillips was finally on the right side of a close verdict, surviving a ferocious late charge by Jessamyn Duke to win a unanimous decision.

Phillips had little difficulty closing the distance on the much taller Duke, nailing her repeatedly with hard 1-2s. A takedown attempt went awry in the second minute though, allowing Duke a chance to get an armbar. Phillips pulled loose and fired off strikes from the top position, eventually getting the mount position and then the back, before Duke got into her opponent’s guard just before the horn sounded.

Duke had some early success in the second with a guillotine choke attempt, but after pulling free, Phillips went back to work on the mat from the top position, controlling the action for much of the rest of the round.

Told she needed a knockout to win, Duke came out swinging in the final round and tagged her foe with several flush shots before taking the bout to the mat. The two went back and forth on the mat, Duke looking for a choke with a little over three minutes left. Phillips managed to escape, but looked exhausted. Duke kept stalking, but wasn’t able to put the gutsy Phillips away. In the final minute, the bout hit the ground again, Duke going all out in search of the finish, but Phillips was able to survive a final-second armbar attempt and get the win. 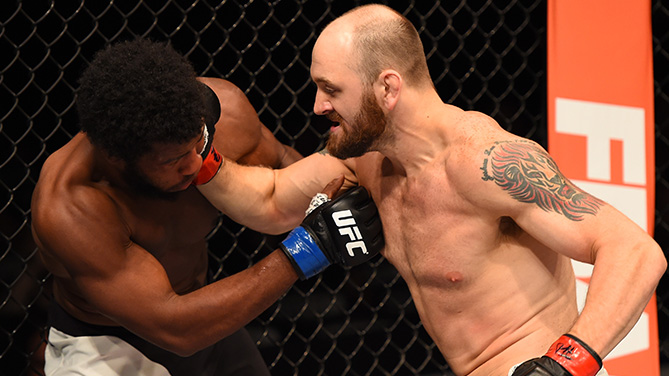 After a very brief feeling out process, Cummings tagged Steele with a flush left hand to the mouth, and the Cincinnati native just couldn’t recover, as a series of follow-up blows forced Otto Torriero to step in and stop the fight at the 43-second mark of the first round.

“I knew he was a tough opponent and that he was going to be really hard to finish, but I know I have power in both hands and I’m a very well-rounded fighter,” Cummings said. “As soon as I realized I had my range and could land a solid left, I did and I knew he was hurt. I just had to stay clean with my punches and stay on him and not give him a chance to recover. It went down pretty fast.”