Kowalkiewicz focused on Rose, though rematch with Jedrzejczyk looms

Even though she sports a perfect 9-0 professional mixed martial arts record, strawweight contender Karolina Kowalkiewicz admits that she’s no stranger to losing.

“Recently I bought a PS4 and played myself in EA UFC 2,” she said. “I am losing all the time, but it’s only fun and I do not care. I even have a lot of laughs. I never did like rivalries in sport or everyday life. For me, MMA is much more than just rivalries.”

So there is no bad blood with Rose Namajunas leading up to their UFC 201 co-main event this Saturday in Atlanta, and certainly no harsh feelings with Joanna Jedrzejczyk, even though the 115-pound champion handed Kowalkiewicz her last loss in competition, a March 2012 defeat via submission. Two months later, Kowalkiewicz turned pro and never looked back. And now, a little over four years later, she could be closing in on a rematch.

“My amateur fight with Joanna was an amazing experience,” Kowalkiewicz. “I was just making first steps in martial arts and she was a world-class Muay Thai fighter. Since then, a lot has changed. Now I am complete MMA fighter and I do hope that we will fight again but this time in the UFC Octagon.”

A victory over Namajunas, which would put Kowalkiewicz at 3-0 in the UFC, could do the trick, setting up a battle of compatriots that “would be the biggest fight in Polish MMA history” according to the Lodz native, who has seen the profile of the sport in her home country rise considerably in the past couple years.

“I think Polish MMA fans can be very proud and I hope they are,” she said. “I do have massive support every day back at home and I know Joanna has it as well. Polish MMA is already on a high level and is still growing, so I hope you'll hear more Polish names in the future.”
RELATED CONTENT: Free Fight: Kowalkiewicz vs Markos | Inside the Octagon guys talk Namjunas vs Kowalkiewicz | Inside the matchup | Fighter bio

An All-Poland showdown for a world title would open even more doors for Polish fighters, but for Kowalkiewicz, there is first the business of beating Namajunas. The 30-year-old lost to “Thug Rose” on the PS4 recently, but when it comes to real fighting, Kowalkiewicz is confident that she will get the job done this weekend.

“Rose is a complete MMA fighter,” she said. “She is excellent in every area. But I have one hundred percent confidence in my coaches and I know that they prepared me very well for this fight. I am not afraid of Rose and I am sure it will be a great fight.”

Having never lost as a pro will presumably leave a fighter with little fear when it comes to the outcome of any fight. Kowalkiewicz doesn’t necessarily agree, knowing that whether she’s 9-0 or Namajunas’ 6-2, what matters is who shows up in better form when the cage door shuts. 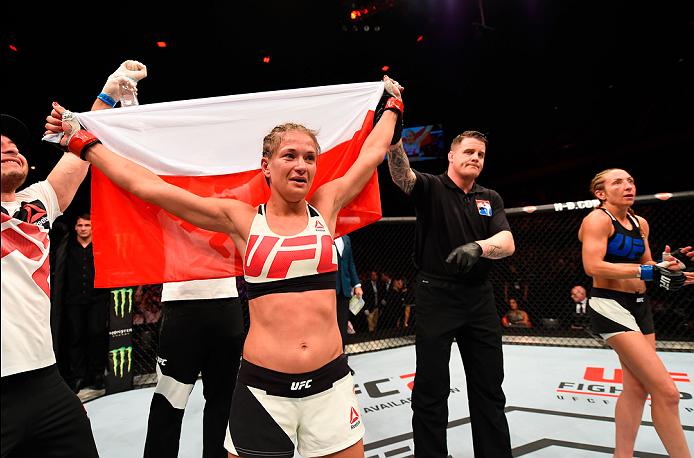 “Records don't fight,” she said. “It doesn't matter what record my opponent has. For every fight and every fighter I am coming with same attitude and prepare the best I can. I do not think about it (being undefeated) at all and it doesn't matter. Maybe that is the reason why I am still unbeaten? I am very grateful that I can do what I love to and I am able to fulfill my dreams.”

There are still more dreams to take care of. But one at time.

“I remain focused only on my next fight and that's it,” Kowalkiewicz said. “After the fight with Rose I will think about what is next. Of course I do have plans and dreams but I am taking it step-by-step.”

Some would call that delayed gratification. Karolina Kowalkiewicz calls it enjoying the ride.

“This is an amazing adventure,” she said. “I still cannot believe what is happening around me. My everyday life hasn’t changed a lot yet, but I do feel like I’m in heaven. My dreams are coming true, I am meeting great people and I do what I love to do. No words can describe what I feel. I am very, very happy.”