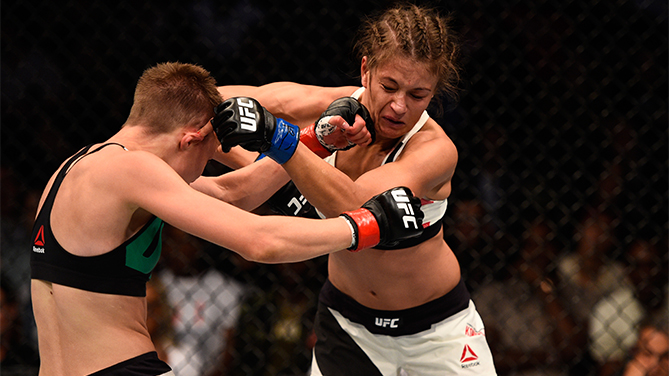 Saturday night, Karolina Kowalkiewicz did her part to set up an All-Poland showdown with Joanna Jedrzejczyk for the UFC women’s strawweight title by scoring a three-round split decision win over Rose Namajunas in the UFC 201 co-main event at Philips Arena in Atlanta.

“I know her, I respect her very much, she’s the best in the world,” Kowalkiewicz said of Jedrzejczyk. “I want to fight with the best, and I will beat the best.”

Namajunas was impressive in the opening round, using slick in and out movement to set up her punches and kicks. At close range, Kowalkiewicz had some success, but Namajunas clinched the round with a late takedown to go with her effective striking.

Kowalkiewicz got close quickly to start round two, allowing her to land several hard knees and elbows. As the two scrapped in the clinch, Namajunas began to find some room to score, but the Lodz native was still more effective against the fence. Eventually, after eating a hard elbow, Namajunas broke free and scored with a 1-2 and a front kick, but a subsequent takedown attempt was tossed to the side, and in the closing stages of the bout, it was Kowalkiewicz landing the most effective blows, especially to the body.

Continuing to press in round three, Kowalkiewicz began to pull away thanks to her inside striking game, and even when the bout went to the mat, her defense kept her out of trouble as Namajunas looked for submissions. 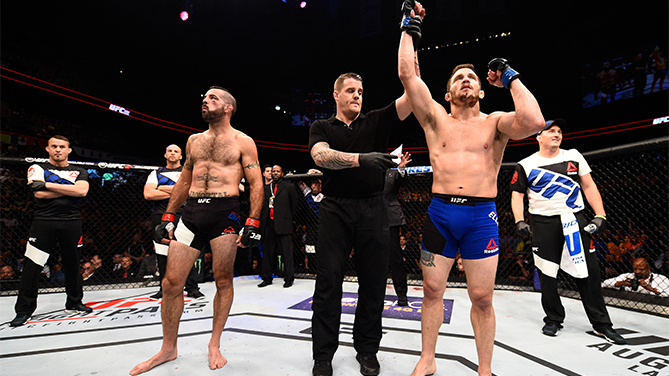 Entering Saturday’s bout against Matt Brown, veteran welterweight Jake Ellenberger had his back against the wall after losses in five of his last six bouts. But “The Juggernaut” responded with perhaps the biggest win of his career, as he stopped Brown in the first round.

Ellenberger stunned the crowd and Brown as the bout opened, dropping “The Immortal” with the first right hand he threw. Brown weathered Ellenberger’s follow-up onslaught and got back to his feet. It looked like Brown was coming on after he shook off the effects of the initial blow, but a left kick to the liver dropped the Ohio native to the deck, with an unanswered series of blows forcing referee Marc Goddard to step in at 1:46 of the first round. 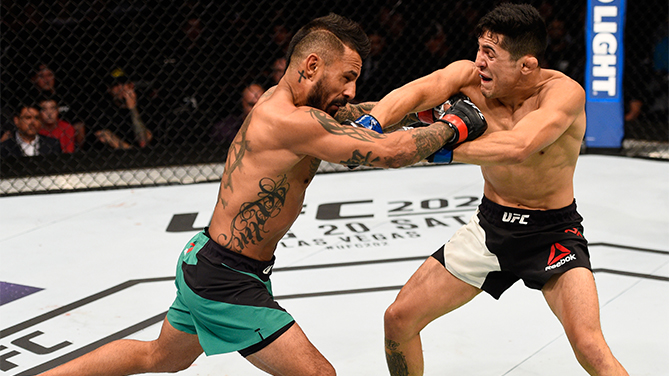 Bantamweight prospect Erik Perez fought a disciplined fight for the most part against Francisco Rivera, but he also threw in a bit of recklessness at times to keep the fans happy en route to his three-round unanimous decision victory.

After a slow start, Perez got into a rhythm and was clearly the more effective fighter by the end of the first round. But Rivera’s left hooks were landing regularly, forcing Perez to give him plenty of respect.

Perez was even more impressive in the second, with two takedowns and a spinning elbow that bloodied the Californian punctuating a winning round.

Rivera came out swinging to start the final round, and Perez eagerly went along with his opponent’s strategy, the two cracking each other with haymakers until going to the canvas. On the mat, Perez took control with his ground-and-pound attack, and Rivera was only able to get upright again with 30 seconds left. By then, it was too late to turn things around. 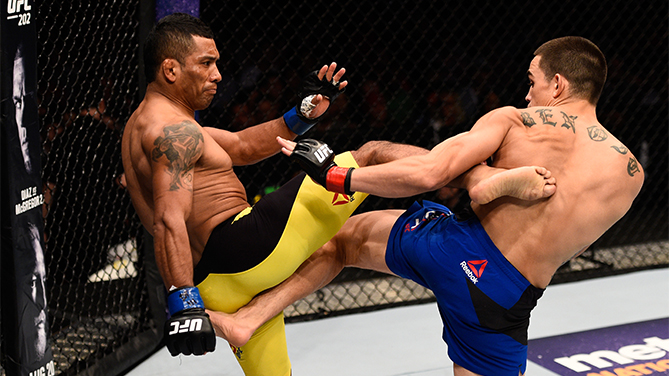 Flyweight prospect Ryan Benoit took the main card opener on 10 days’ notice after an injury to Ray Borg, and he made the most of the opportunity, handing Colombian Olympian Fredy Serrano his first pro loss via split decision.

Serrano was looking for the finish with every punch and kick he threw as the fight opened, and even his slam of Benoit in the second minute had the same intention. But after they rose, Serrano got rocked by Benoit, forcing him to seek – and get - a second slam. After standing, Benoit drilled Serrano again, but the Colombian shook it off and got back to his all or nothing attack, getting caught once more before the end of the round.

Another slam by “El Profe” punctuated the early going of round two, but he wasn’t able to keep Benoit grounded. While standing, Benoit picked his shots well as Serrano continued to throw haymakers. With a little over a minute left, Serrano put Benoit on the deck, and he kept him there until the closing seconds of the frame.

The two traded takedowns to begin the final round, but neither did much with them. Down the stretch, Benoit was clearly winded, but he still landed the more accurate blows, a fact reflected on the final scorecards.